The preamp from Neve's "ultimate analogue console” is now available 'to go'... 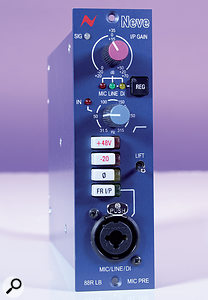 In recent years, Neve have started to make available classic modules in the ubiquitous API 'Lunchbox' format. Having already launched the enduringly popular 1073 preamp and equalisers and the 2265ALB compressor-limiter in this form, the fourth module to be released into the 500-series world is the 88R LB mic preamp. As the name implies, this is the same preamp as that employed in the 88RS console, which was launched in 2001 and is described by Neve as 'the ultimate analogue console'. Although it's often tempting to dismiss such descriptions from manufacturers as marketing waffle, Neve can point not only to their reputation, but to countless quotations from a star-studded list of engineers and producers, all of which lend weight to that proud boast.

While the module is generally of very high quality, with top-class components used throughout the audio circuitry, the controls do seem a little less 'solid' than those of the 1073LB (which was also in my Lunchbox rack during the review tests), with a little more 'play' on the pots than I was expecting. This isn't a new thing, as the same pots are used in the 88RS console — and, in all fairness, it has to be said that it doesn't really compromise the sound or your ability to control the unit in any way other than the ease with which you can very precisely (within ±0.25dB) match the gain levels on multiple modules.

The knobs double up as push-buttons, and the long shafts extend back quite some way inside the module. Unlike many dual-concentric pots, such as one might find in a guitar amp, for example, the 'business end' that connects to the circuit board is diminutive enough that it can easily be accommodated on a crowded circuit board inside a 500-series case.

When it comes to comparing mic preamps, the most important factors are the technical and subjective sonic quality, and the functionality on offer — and in each of these respects, the 88R LB is likely to make you very happy indeed, as there's everything you need here from a mic preamp, and a little more besides.

By depressing the input gain knob/button, you can cycle through Mic, Line and DI input selections, with your current choice reflected by an LED located adjacent to the knob/button. There's up to +70dB of gain available, which should be plenty for all but the most demanding of passive ribbon mics. Beneath the gain control, the high-pass filter knob is used to select the filter's turnover frequency, and the filter itself is switched in or bypassed by depressing the knob/button.

Four simple white push-buttons allow the user to switch +48V phantom power on/off, engage a -20dB pad, invert the polarity of the signal and select the front-panel input, which is presented as a Neutrik Combo socket beneath the buttons, and can accept mic, line or DI sources. The phantom power has been implemented in a thoughtful way: you can only activate phantom when a mic input is present and selected, and if you change the source selection to line or DI, the phantom power is automatically deactivated, making it very difficult to accidentally 'fry' what you plug in!

Other than the ground-lift toggle for the unbalanced DI input, there's only one other control, marked 'REG'. This, it turns out, is an abbreviation for the word 'Regeneration'... which may or may not bring you closer to guessing its function! Reading the preliminary manual (the final version wasn't available at the time, but should be by the time you read this), it became clear that this feature, which doesn't appear on the 88RS console, enables you to route a DI or line-level source through the input transformer, and that the blue LED embedded in the button lights when this feature is selected.

The Sound Of Neve 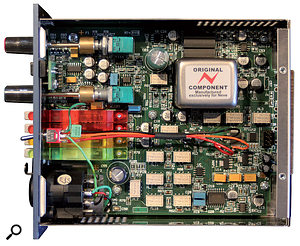 Visible here are the pair of dual function push-button/knobs and custom input transformer.

I'm struggling to find much to say about the sound of this preamp, other than that it's everything I'd expected, given the design's heritage, and that the sonic quality is very good. It's a 'cleaner' sort of sound than you'll get from the 1073 (a good thing, in my book), albeit one with the characteristic transformer-ish Neve 'colour' about it, and one with less audible noise than in the older design. Unlike the 1073, the 88R LB doesn't give you the option of driving the input gain hard, in search of 'tone', and then backing off the output level to taste. (I wish more preamps would offer this feature, as it's only when you 'push' a preamp in this way that it begins to make a really significant and unique tonal contribution.) However, it's perfectly possible to use any mic preamp with a passive attenuator in series before your A-D converters — so that's what I did. To my ears, the overdriven character of the 88R LB is rather different from that of the 1073, sounding much brighter, tighter and more focused. Whether you prefer that sound is entirely a question of personal taste, but I can see applications for both sounds in my own music, for example.

The Regeneration function is a very nice touch indeed, as it makes it easy for you to add a little 'analogue warmth' to individual sources, or even to entire mixes if you invest in a pair of these preamps. I used a Lindos audio analyser to compare the effects of the standard and Regeneration functions on a line-level source. In most respects, the figures were very similar, although the Regeneration routing resulted in a slight but noticeable roll-off in the top end, and a tiny bit at the bottom, too.

The two review units weren't presented as a 'matched pair', but there was no discernible difference between them. The Regeneration function also brings some flexibility for recording, as it enables you to capture a clean DI or line signal while tracking, leaving the choice of adding the warmth later, if you don't feel able to commit to that decision at the time. You might prefer to make the decision, but it's nice to have the option.

All in all, then, this is a typically high-quality preamp from Neve, and one that offers a little more functionality than most. Given its superb sound and versatility, and the dual functionality of the push-button/knobs, I find it easy to forgive the slight flimsiness of the controls that I described at the outset. While it's not exactly cheap, it's a damned site cheaper than buying the full console — and as well as being a good preamp in its own right, it could prove to be the perfect complement to UAD's Neve-endorsed plug-in versions of the Neve 88RS channel strip.

There are now countless mic preamps available for the 500 series, and the choice between them has to be made according to sonic taste and functionality.

A successful port of the preamps from Neve's 88RS console to the 500-series format.

£714 including VAT per module.