Native Instruments' guitar amp simulation software has sprouted a bunch of new amps and effects, along with more realistic cabinet and miking options, and is easier to use than ever before. 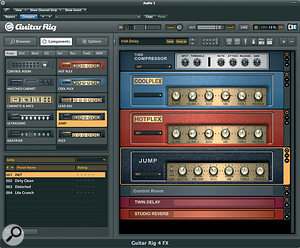 There are three new amp models in Guitar Rig 4, all based on Marshall originals.

NI's Guitar Rig software has one of the best drag‑and‑drop interfaces around, and offers perhaps the most flexible routing options of any amp simulator, but some felt that the authenticity and feel of the amp/speaker models in earlier versions didn't always convince. With that in mind, version 4 focuses squarely on the sound, thanks to a new feature called Control Room. When it comes to updates, manufacturers also like to entice us with 'more' as well as 'better', so this version adds three new amp models, making a total of 15 guitar and bass amp models, and four more effect modules, which brings the overall number of included effects to 48. NI also claim to have improved their pitch‑manipulation algorithms. Guitar Rig 4 is available separately, as part of NI's Komplete 7, or in bundles with NI's hardware options. Authorisation is via NI's web site. As before, Guitar Rig works as a stand‑alone program or as as a plug‑in within any DAW that supports the common plug‑in formats.

In creating the Control Room module, which appears as an alternative to the existing Matched Cab and Cabinets & Mics modules, NI's designers took advantage of a specialist recording studio owned by German guitarist Peter Weihe. His room has multiple guitar cabinets and multiple microphones permanently set up, so that clients can try any cab and mic combination without having to move gear around or repatch, and mix the outputs from the various mics to create blended sounds. What NI have done is take impulse responses of several mic and cabinet combinations and build them into a simple, mixer‑like interface that allows the Guitar Rig 4 user to explore the same tonal possibilities in a very straightforward way.

The optional Rig Kontrol 3 has not changed for version 4: it's still a 192kHz/24‑bit USB 2.0 stereo floor controller and interface that turns Guitar Rig into an effective live performance system, with line outputs that can be plugged directly into a PA system, full‑range amplifier or the power stage of a guitar amplifier. Two inputs may be utilised by different instruments for the simultaneous processing of two guitars, two basses or one of each. Headphone monitoring is also built in, and there's a four‑digit display for showing the patch number and other information. Eight buttons and one pedal, with an under‑pedal switch, access patch changes and allow effects to be switched in and out or modified during performance. Within Guitar Rig 4, you can assign the Rig Kontrol 3's switches and pedal to the desired software parameters via an intuitive drag‑and‑drop system, and these assignments are stored within each patch. A modulation matrix allows control of multiple parameters from a single button or pedal, and a 'snapshot' function can be used to store different control settings of the same rack. For more details, see our review of Guitar Rig 3 back in SOS December 2007 (/sos/dec07/articles/guitar_rig_3.htm).

Rig Kontrol 3, and its RK2 predecessor, now also work as MIDI controllers via the new Controller Editor application, downloadable from the NI web site. Guitar Rig 4 also works with the NI Audio Kontrol 1 interface hardware, which is ideal for desktop studio use. This incorporates assignable buttons and a control dial, and supports MIDI key commands for controlling software. A new master effects section has also been added, for the benefit of those using Guitar Rig 4 live. This is includes global EQ as well as the ability to set up overlapping delays and reverbs when changing patches. There's also now true‑stereo processing throughout the whole signal chain.

All the old favourites from earlier versions of Guitar Rig are still there, including virtual tape decks for recording and playback, a metronome and an accurate tuner. There are around 250 presets, arranged into categories within a significantly updated and user‑friendly browser system that's compatible with NI's KoreSound Kore 2 format. You can search via a choice of attributes, including musical styles or amp type, and you can also rate the patches, by giving them one to five stars as you browse. 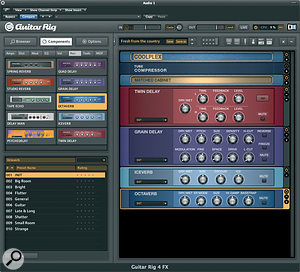 All three new amp models mentioned in the promotional literature have a British feel to them, being based on popular Marshall amplifiers. Jump is an alternative, smoother version of the existing Classic Lead 800, presumably with the two inputs linked or 'jumped', while a model called Cool Plex is designed to excel at cleaner sounds. I was expecting a fairly bland clean sound, but it's actually really lively, and nails those springy country tones and pop chords that I felt were missing from previous versions.

Hot Plex is another variation on a theme, but with more gain for those of a more metallic disposition. The two hotter models exhibit the expected scoop and snarl, especially when used dirty, though many users forget that Marshall amps and their virtual clones can also sound pretty sweet when played clean, a fact underlined by the most excellent sound of Cool Plex. Given the popularity of Marshall's amplifiers, the inclusion of more choices was probably long overdue.

The effects section has gained a Grain Delay, which allows chunks of audio from 10ms to 2s long to be used to create echo effects and grungy modulation‑like effects at shorter times. Delays may be modulated, or even reversed, to stir things up further, and there's a pitch‑shifter for the delayed effect, with coarse and fine controls. There's also a Drive control, which I found less impressive, but for shimmery textures, Grain Delay is a great addition.

Octaverb is a stereo reverb designed to capture the early-reflection character of eight different rooms, but although they are very different, they don't sound quite like real rooms to me, at least not in the way something like a Lexicon reverb does. However, they add new ambience‑like flavours that work well with guitars, and that's the main thing. By contrast, Iceverb has a cold, shimmery sound with a filter that offers some creative alternatives to conventional reverb, and if you automate the filter settings, you can produce a kind of wah‑verb. The name sums it up pretty well: the reverbs sound as though they belong in an ice cavern, though the two coloration controls can change them from glittery and bright to a damped 'metal tank' kind of sound.

Finally, Twin Delay houses two parallel and identical delay modules that may be adjusted independently to create a range of musical stereo delay effects where the echo bounces from one speaker to the other. It's hardly revolutionary, but sometimes these simple effects are the most artistically pleasing. 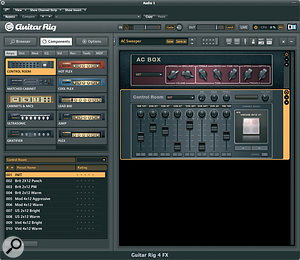 As with earlier versions, when you insert a new amp module into the Guitar Rig rack, it loads up with the appropriate Matched Cabinet, with a couple of virtual mics that can be blended. You can also call up the original, more flexible Cabinets & Mics module, where you can choose any combination of cabinets and mics and adjust the mic position, as well as applying EQ and pan. Control Room is the new 'third way', and gives you access to the impulse responses taken from that rather special studio room mentioned earlier. There's a choice of five different speaker cabinets, and once you've chosen, you can blend and pan the outputs from between six and eight different microphones (the number and type vary depending on the cabinet you choose), using a simple, mixer‑like interface that also includes an Air control to add a bit of room space to the sound. The mic signals have been arranged to remain in phase, so you can use any combination without messing up the tone. To my ears, these speaker IRs, which are used in what is described by NI as a latency‑free, convolution‑based process, give the sound a touch more depth and authority than the standard cabinet models.

Guitar Rig was never my go‑to solution for conventional guitar sounds, not because it didn't stack up well alongside the competition (which it did), but rather because I tend to prefer the experience of miking an amp. Of course, guitar tone is a very personal thing, and many of the dirtier sounds on offer were already quite impressive — but with the addition of Cool Plex, I'm now much more likely to use Guitar Rig for recording classic guitar tones than I was.

By contrast, Guitar Rig has always been one of the first plug‑ins I think of when I need to create a more abstract guitar sound, and in this respect I think its ability to create parallel split routings or divide the signal chain by frequency makes it as powerful as anything out there. The results can be almost synth‑like in their textural complexity, so now it covers all bases (and some basses), delivering both traditional and experimental guitar sounds and effects. To this end, the new effects modules are very worthwhile additions.

The new amp models are very welcome too, especially Cool Plex, which nails those clean sounds that I felt were lacking before, and though the other two new amps don't offer anything too radical, they provide some welcome variations on familiar flavours. Control Room is more of a big deal, really, as it lets you take on the role of recording engineer in more depth when it comes to blending your choice of mics and speaker cabinets. It includes a ribbon mic as well as several familiar dynamic and capacitor models, so you can get a lot of different tonalities out of each of its five cabinets. If you're prepared to work at the controls, you can get very close to the sound you'd expect to hear in the control room if you were miking a real amp.

The enhanced MIDI and floor‑controller side of the program will appeal to those who wish to use Guitar Rig on stage, but the improved browser should be welcomed by all users. It should also be remembered that when it's used as a plug‑in, you can miss out the amp and speaker models if you like, and simply apply Guitar Rig 4's effects to other sounds in your mix, so it is more flexible than it might at first appear. In all, this is a significant upgrade to a well‑established plug‑in that remains surprisingly affordable.

This update to Guitar Rig makes it better equipped to produce conventional guitar sounds, while its outstanding effects section means that you can get as weird and textural as you like, all in glorious stereo and with very little effort.