Mokafix Audio's Efflam Le Bivic is a man with a mission, and that mission is to create plug‑in versions of a huge range of vintage fuzz and distortion pedals. (Actually, he's a man with two missions, the other one being electric piano emulation, but we'll cover his Wurli and Rhodes models another time.) At the time of writing, there are no fewer than 14 of these in the Mokafix range. Two of them — a SansAmp GT2 clone and a Boss Metal Zone emulation — are freeware, while the others cost a princely nine Euros apiece. And such is Efflam's attention to detail that some of them are little plug‑in suites in their own right: Muffin Rider, for instance, consists of four separate plug‑ins that faithfully recreate various historical variants of the Electro‑Harmonix Big Muff. 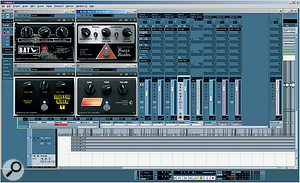 A couple of other standard‑fare pedals are on offer, such as the inevitable ProCo Rat and Ibanez TS808, but much of the range concentrates on cult effects, many of which haven't been emulated in software before. So, for example, if your mix is simply not complete without a virtual Shin‑ei Companion Fuzz, Fender Blender, Roland BeeBaa or Maestro Brassmaster, you've come to the right place.

The plug‑ins are available only in VST format for Windows machines. They are installed by dragging the DLL files to your plug‑in folder, and authorised by entering a user name and licence key. If you're installing all of them at once, this gets old fast, and it would be nice if a single authorisation could enable multiple plug‑ins.

For such affordable plug‑ins, they boast slick and consistent user interfaces, in most cases based on doctored versions of the original pedal layouts. You can, of course, use them in any context, but their spiritual home is as part of a signal chain being driven by an electric guitar and feeding an amplifier and speaker cabinet. To this end, I tested them in Cubase with NI's Guitar Rig playing the latter part. This enabled me to A/B the Mokafix plug‑ins against NI's own emulations of the same pedals, where possible, as well as a couple of real ones. An unusual feature is that you can choose the degree of oversampling employed, between 1x (no oversampling) and 4x; the difference is subtle, but higher settings can sound smoother and less edgy.

It's difficult to set up precise A/B tests, especially where hardware is concerned, since it's hard to eliminate all the variables of level, impedance and so forth. In general, though, I was impressed at how well the Mokafix plug‑ins capture the character of the pedals they emulate. In a three‑way shoot-out between Mokafix's The Bat, Guitar Rig's The Cat, and my own US‑made ProCo Rat, it was an early bath for The Cat, which sounded thin and flat by comparison. Round two was much more interesting, because although I could never quite get Mokafix's plug‑in and my pedal to sound exactly the same, I often found myself trying to tweak the pedal to sound more like the plug‑in, rather than the other way around! If I had to sum up the difference, I'd say that the plug‑in sounds a shade looser and more ragged, with a more complex bottom end. Obviously, it's a matter of taste, but those are the sort of qualities I like in a distortion pedal, and I would actually choose Mokafix's plug‑in over the real thing in many cases.

The same wasn't quite true of my favourite distortion pedal, a battered '70s Japanese knock‑off of an MXR Distortion+; Mokafix's D Plus is a little thinner, and lacks the same chunky quality on low notes, but it's certainly in the ballpark (despite having the knobs the wrong way round). Likewise, the various Big Muff versions are both subtly different from one another, and more complex and playable than the one built into Guitar Rig. Much thought, too, has gone into the Kung Fuzz Fuzzface clone, which offers various 'under the hood' parameters not controllable on the real thing, and sounds great. Whether the more obscure emulations, such as the BeeBaa or Brassmaster, sound authentic I couldn't tell you, but they certainly sound distinctive — especially the latter, with its Brass control, which appears to have something in common with ring modulation.

All in all, these plug‑ins make a very nice addition to a computer‑based guitar setup. I like the fact that you can buy just one or two, or a larger bundle of your choice (nine Euros each; bundles of three, six, nine or 12 effects cost 23, 38, 52 and 66 Euros respectively). Since 20‑day demo versions can be downloaded, there's really no reason not to give them a try. And if Efflam ever runs out of vintage pedals to model, I'd be curious to hear any original designs he can come up with. Sam Inglis

The Mokafix Audio range provides a cheap and very effective way of expanding the palette of distortion and fuzz effects in your Windows DAW.