Ogre’s Tubeholic pedal overdrive contains neither tubes nor, as far as I can tell, any alcohol. It does, however, feature 440g of barking-mad cast metal as its case, which almost certainly costs far more to make than the circuitry inside it! The forehead of the alien face slides back to reveal three controls for level, gain and tone, but there’s nothing too radical as far as control layout is concerned. Stamping on the alien’s chin activates and bypasses the pedal. As a bonus, the Roswell-style eyes light up blue when the pedal is active. Apparently there will also be a limited-edition green version available in the UK if ‘vintage armour grey’ doesn’t spin your wheels.

The battery compartment is recessed into the non-slip base and requires no tools to open, although a standard Boss-compatible 9V DC power supply may be used as an alternative to the traditional PP3-type battery. However, with only 6.5mA current consumption, an alkaline battery should last a fair time.

The circuit is traditional analogue and we’re told it uses NOS (New Old Stock) diodes to achieve symmetrical clipping, but that tells only a very small part of the story. Exactly how the circuity is configured is not revealed, but then what does that matter as long as the pedal sounds right? 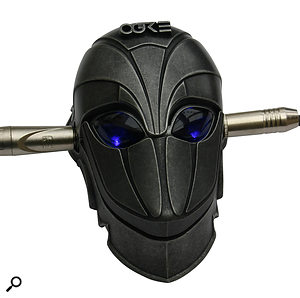 Thankfully it does — based on looks alone I probably wouldn’t have asked for this pedal to review, but having been persuaded to try one I realised that the designers were onto something, and not just a cheap source of hallucinogenic drugs! 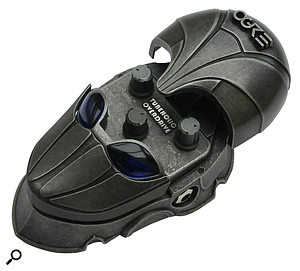 The Ogre’s head slides up to reveal the controls, and down to protect their settings during transit.Drive is adjustable from virtually clean, via blues to classic rock grind and all without swamping the natural tonality of the guitar. The pedal has a natural ability to pull out harmonics, yet it manages to retain a bright edge while avoiding adding any unwelcome grit at the high end. There’s also no significant added circuit noise, which is particularly important for studio work. Think Tube Screamer but with a wider frequency range, or a Fulltone OCD with a little more mid warmth and perhaps more drive range. It’s also responds well to dynamic parts, allowing you to leave the pedal in circuit and then just dial up the guitar volume for more drive in the solos and back it off in similar fashion. As expected, the tone control goes either way from centre allowing the tonality to be made smoother or brighter where the mid position retains the essential tonal balance of the instrument being fed into it.

In terms of audio quality then, this pedal is up there with other respected boutique offerings, and it works its magic just as effectively with single-coil pickups as it does with humbuckers. The over-the-top case design might not be to everybody’s taste but the practical benefit of the sliding control cover is that your settings won’t be lost when you drop the pedal into your gig bag. Despite the out-there aesthetics, the pedal isn’t significantly wider (89mm) than a typical pedal, which means it won’t take up too much space on a pedalboard. While there are cheaper overdrive pedals, given the sound quality and robust construction, the Ogre Tubeholic Overdrive is actually very reasonably priced, so even if you’re not convinced by the unconventional styling, do try to hear one as I think you’ll be impressed. Paul White