Despite enormous popularity in the 1980s, Casio’s CZ range has never been made into a soft synth, until now...

Few now remember that Casio’s CZ-series keyboards were some of the most popular synths of the 1980s. With the exception of the analogue choruses on later models, they were wholly digital instruments with almost incomprehensible sound generators and equally impenetrable control surfaces, but they were cheap, and that counted for a lot. Inevitably, their Phase Distortion synthesis (PD) was compared with Yamaha’s Frequency Modulation (FM), but the underlying mathematics of the two systems was rather different, and the Casios had an idiosyncratic character that lay somewhere between Yamaha’s DX-series and the DCO-based analogue synths of the era, making them perfect for musicians who were moving away from the expensive polysynths of previous years and experimenting with lower-cost instruments and new musical forms. Casio sold them by the truckload and, even today, the CZs have their aficionados, so it’s surprising that there has been no serious attempt to recreate them as a soft synth. Well... until now.

There’s no room to explain PD synthesis in full here, but a brief recap should explain the Virtual CZ GUI. The eight images under the representation of the LCD depict the waveforms available, starting with a sawtooth on the left and ending with a resonant/sync-y something-or-other on the right. You can’t morph between these as you would on a wavetable synth; instead you choose two (on the original, you couldn’t combine 6, 7 or 8 with one another, these were ‘illegal’ combinations), whereupon each will be played alternately, with a resulting drop in pitch of one octave where appropriate.

The waveforms you see are generated when the phase modulation (think of this as waveshaping) is at its maximum; the harmonic content diminishes as you reduce the modulation until, at its minimum, you obtain something very simple, generally a sine wave. Reducing the amount of modulation applied to the analogue-style waveforms is therefore similar to closing a low-pass filter, while doing so with the ‘resonant’ waveforms imitates a band-pass filter. So, whereas analogue subtractive synthesis typically uses three contour generators — oscillator pitch, filter cutoff frequency, and amplifier gain — to shape its notes, PD offers three that control the oscillator pitch, the DCW (digitally controlled waveshaper), and the amplifier gain. 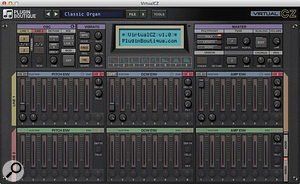 Like the original synths, Virtual CZ offers two ‘Lines’ (essentially, two synthesizers), each with three eight-stage contour generators. All three are velocity sensitive and, in addition, Key Follow can influence the depth of the waveshape modulation as well as the rate of the Amp contour. This is correct; higher notes on acoustic instruments are generally brighter and faster than lower ones. Virtual CZ’s contours also offer two further facilities not found on the original synths. The first is looping, which loops all of the stages up to and including the sustain, which you can define as any stage from 1 to 7. The second is a conventional ADSR mode for those who prefer to work within the limits of traditional four-stage contours. But beware, seasoned CZ programmers will tell you that ADSRs are for wimps. 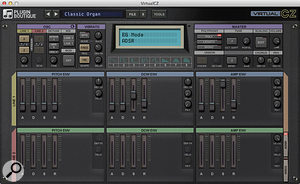 ADSRs are for wimps...In the oscillator section, you’ll find the controls for selecting the two waveforms modified by each Line, plus a new knob that allows you to set the base value for the waveshapes’ modulation amount. This is equivalent to a filter’s initial cutoff frequency and, although this didn’t exist as a parameter in the CZs, it should have done! Like the originals, you can select four options for the Lines (1, 2, 1+1 and 1+2) and detune them if either of the dual modes is selected. There’s also the noise- and ring-modulation of the original synths, the latter of which was one of their defining features.

Unfortunately, CZs were not well endowed in the (conventional) modulation department. Just a single LFO was provided, and this was hard-wired to generate vibrato. The same is true for Virtual CZ, although you can synchronise the LFO to MIDI, and it offers a genuine fade-in (rather than the delay-then-full-amplitude operation of the originals) as well as a sine wave, S&H and noise in addition to the original four waveforms.

You could layer sounds on the CZs and they even offered a primitive form of multi-timbrality... and none of this is provided by the Virtual CZ, although, when used as a plug-in, you can launch as many instances as you want to recreate these facilities. Instead, Virtual CZ offers three playing modes: 32-note polyphonic, polyphonic legato and monophonic, the latter two of which offer unison of up to eight voices per note, with programmable detune to create some huge sounds, and a Phase Reset parameter that, if wanted, ensures that all the oscillators start at a consistent phase every time you play a note. The Pan Width then allows you to spread the sound across the soundfield. In poly mode, the L/R position of each note is determined randomly while, in legato and mono modes, the ensemble is spread. 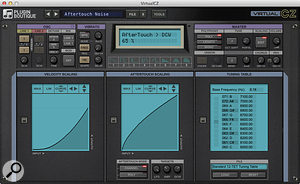 Finally, we come to the chorus. In the CZs, this had character, but it lacked class, so I was delighted to find that Virtual CZ has two chorus modes, one that imitates the original and a second that seeks to imitate the sonic fairy-dust imparted by the Roland Dimension D. Both are much less noisy than the original, so it would be hard to claim that the CZ mode is authentic. ‘Better’ is the word that I would use.

In the 1980s, Phase Distortion offered at least two significant advantages over Yamaha’s all-conquering FM synthesis. Firstly, its parameters felt vaguely analogue in use and, secondly, it was capable of generating rich ensembles and pads as well as the percussive and metallic sounds that dominated the DX7’s sonic palette. And so it is with Virtual CZ. Sure, if you’re after the sound of a bunch of Moog 901 oscillators tearing the guts out of a 904 filter, you’re looking in the wrong place. But don’t blame Phase Distortion — that’s like asking your toaster to make espresso. Instead, use the soft synth to do the things that the CZs were good at. With suitable DCW (digitally controlled waveshaper) base values and contours, you can create some wonderful patches, many of which can sound more analogue than analogue. Well, maybe that’s not quite true, but rasping, burbling ‘filter sweeps’ are never far away once you’ve gotten to grips with PD, even if it has no filters!

So, is Virtual CZ a perfect recreation of the CZ1? No. The programmers admit that the parameters and the ways in which they interact were determined without reference to the underlying specifications, largely because there are no documents in the public domain that provide the necessary information. So seemingly identical patches can sound slightly different and may respond differently when played. I verified this by loading sounds from the huge library of factory patches supplied with Virtual CZ and comparing them with those in my CZ1. Some were remarkably accurate, while others needed a little tweaking. Others remained stubbornly in the realms of ‘almost, but not quite’. But let’s not fixate on small differences; the only times that these might matter would be when you attempted to drop specific sounds into existing mixes. Furthermore, while Virtual CZ seeks to recreate the CZs’ idiosyncrasies, its creators haven’t been blind to what these synths could have become had Casio not taken a horrible wrong turn with the VZ-series. Sure, Virtual CZ lacks the CZs’ Glide function, so I would recommend that this is added to the v2 wishlist alongside another LFO or three, but it provides numerous facilities that the CZs didn’t, and its ability to use the ‘illegal’ waveform combinations makes a whole new range of sounds possible. However, the authors stopped short of recreating the so-called ‘hidden waveforms’ that you can squeeze out of a CZ if you use SysEx to force it to do naughty things. This doesn’t bother me. Those waveforms and effects were often glitchy and hard to control; academically interesting perhaps, but not musically mainstream.

During the review, I discovered just one significant fault. In the first two versions, releasing the sustain pedal terminated all the notes — even those still held down by your fingers! I reported this, and a beta of v1.0.2 (which sorted this out) arrived within 24 hours. There are still a handful of minor issues to be addressed, but this bodes well.

I rarely used my CZ1 because there were always easier and more enjoyable ways to program the sounds I wanted. But today, Virtual CZ reveals all of the CZ1’s power using a clear and simple GUI that not only remains true to Casio’s original philosophy but also adds a range of powerful new facilities that wouldn’t have been practical in 1986. There may be purists who decry it because of its slight sonic differences, but Virtual CZ is an excellent soft synth that simultaneously imitates its inspiration and extends it far beyond its original limitations.

The CZ101 and CZ1000 appeared in 1985 and were hugely popular with cash-strapped musicians. While the later CZ3000 offered more keys, greater polyphony and more patch memories, and the CZ5000 added a sequencer, the smaller models proved to be the most enduring. Nevertheless, the CZ1 is the one to have. With its performance memories and velocity- and aftertouch-sensitivity, it’s by far the most powerful and musical of the family.

Virtual CZ allows you to set up velocity and aftertouch responses on a patch-by-patch basis. It understands poly-aftertouch, and you can independently determine the amount of aftertouch sent to the LFO depth, the waveshaping, and the audio amplifier. You can also micro-tune patches by entering offsets into the tuning table that lies alongside the scaling windows. You have to do so for every key, so the ‘.tun’ file format is supported to speed things up. You can download information and alternative .tun scales from the web.

I was excited when I heard that Virtual CZ was going to be a CZ editor as well as an emulator. Unfortunately, the reality is less exciting than I had hoped. To be fair, this is not Virtual CZ’s fault. The Casios don’t understand MIDI CCs and only accept SysEx in patches or dumps of patches so, while you can set up sounds in Virtual CZ and dump them into the hardware synth, you can’t edit them and hear the results in real time. Nonetheless, the hardware/software equivalence is useful the other way around because long-term CZ aficionados will be able to load their hardware patches and libraries into the soft synth. Not everything is translated perfectly, but the beta-testers have reported “95 percent” success rates.

Virtual CZ isn’t a perfect emulation of the CZ-series synths, but it’s damn close. Offering a range of sensible extensions to Casio’s implementation of Phase Distortion, it not only replicates the character of the vintage instruments, it adds much that I think fans of the originals are going to love.