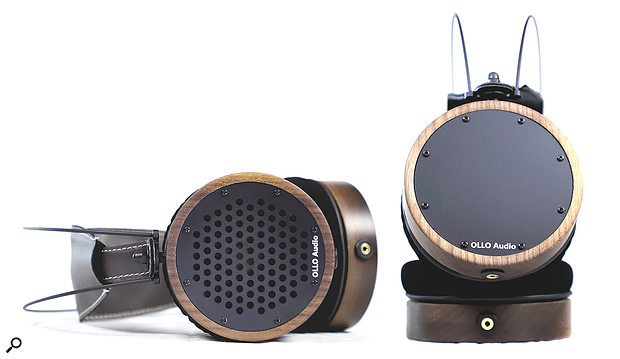 Most new headphone manufacturers target the booming hi-fi and consumer markets, but OLLO Audio are an exception. They've made their entrance with two models that are explicitly aimed at audio engineers, and their major selling point is said to be a flat frequency response, achieved without the use of DSP correction. The OLLO headphones are also intended to be fully field-serviceable, with every major component available as a spare part that can be replaced by the user.

Both the S4, aimed at mix engineers, and the S4R, intended for tracking duties, are passive headphones that employ conventional moving-coil dynamic drivers. The key difference between the two models is that in the S4R, these drivers are housed within closed earcups, whereas the S4 is an open-back design. In fact, apart from the panel that forms the outer side of the earcup, the two appear to be otherwise identical. Both are supplied in a simple cardboard box, with a soft bag but no rigid carry case. The documentation includes both individual test plots for each unit, as supplied with good mics, and some curious warnings about not plugging the phones in with the earcups face down on a flat surface.

Unusually, the OLLO headphones are not 'handed': the earcups are perfectly circular, and the frame is symmetrical front-to-back. Which earcup is the left one depends solely on which way round you connect the detachable cable. This is a very nice braided, uncoiled affair that divides into two about three-quarters of the way along its length before attaching to the earcups using 2.5mm mini-jacks. Unfortunately, though, the letters L and R on these jacks are printed in a light grey which is almost indistinguishable from the silver body of the connector, making it needlessly difficult to determine which side is which.

The distinctive cable is just one part of a strong visual aesthetic, which is carried further in features like the walnut earcup surrounds and artificial leather headband. The design and construction give the S-series phones a pleasingly solid and somewhat handmade feel, and a generally comfortable fit, which comes at the cost of one fairly significant annoyance. The frame on which the earcups and headband sit is formed of two rigid wire hoops, which are alarmingly resonant. Even a slight bump on the frame is loudly audible, and when I deliberately 'pinged' one of the hoops, it took the ringing more than 15 seconds to decay to the point where I couldn't hear it any more. There were a number of times during the review period where I felt the need to damp the hoops with my hand to check that they weren't contributing to some sort of low-mid-range problem.

The published impedance of both S-series models is 32Ω, suggesting that they should be easy to drive from a low-power source such as a laptop's built-in headphone output, and so it proved in practice.

When I received the S4s, I was about to start some revisions on a mix in response to feedback from the artist, and so put them through their paces straight away. The results were not quite as I'd expected, and when I auditioned the resulting mix on other systems, it sounded a bit odd. Some A/B comparisons with other phones confirmed my initial impression that the S4s have a noticeable suck-out in the mid-range. Above 2kHz or so they seem admirably restrained, while the bass and very low mid-range are more prominent than on most open-backed phones. In comparison, the closed-back S4Rs are more aggressive and coloured in the 1-2 kHz region, the bass being less prominent and also less deep. It's a tonality that is probably well tailored to their intended role as tracking headphones.

We all want our monitoring systems to be 'neutral', but designing a pair of headphones that is subjectively neutral is a complicated business. If we take it to mean sounding like a flat-response loudspeaker in a good room, the S4s don't sound wholly neutral to me, and I wonder if a clue to that is to be found in the references to the ISO 226:2003 standard on OLLO's website. This standardises the 'equal loudness' curves originally developed by Fletcher and Munson, showing how the ear's frequency response varies with SPL. At all SPLs, the shape of the equal-loudness contour is broadly similar, with the ear being much more sensitive in the mid-range than at low frequencies. It could be that OLLO have tried to compensate for this contour; if so, I'm not sure how valuable this is for music production, since people who listen to your mixes won't be hearing them on compensated systems. I found the explanation on OLLO's website confusing, especially when the enlarged versions of their frequency-response graphs are visibly different from the thumbnails.

Having said all that, the soft mid-range and even high-frequency response means they're pleasant and non-fatiguing for long-term use, and neither do they deviate from the flat so much that you couldn't learn to compensate. Subjectively, I think there are more 'neutral' mixing headphones than the S4s, but their emphasis on the low end has obvious positives for some applications. In fact, learning to fill out the mid-range properly is a skill that many novice engineers struggle with. A monitoring tool that encourages people to push things a bit harder in this department might be no bad thing!