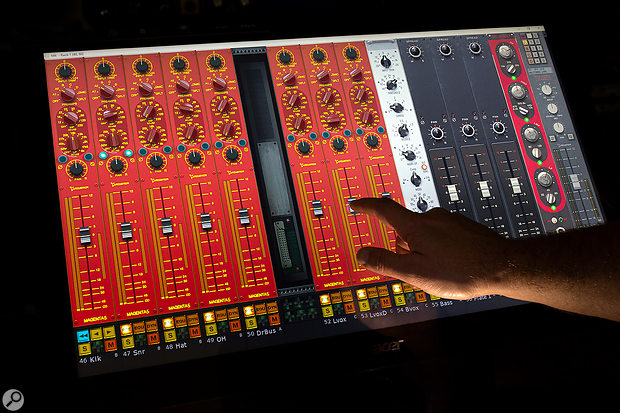 Rumoured for months, the 'powered by Acustica' virtual mixer is now close to release — and SOS were treated to an exclusive test drive!

We don't often 'preview' a product rather than review it upon its release, but if anything warrants an early look I feel Modula does. Soon to become available under the 'Quantica: Powered by Acustica Audio' name, there have been rumours of its arrival for over a year but, with little to go on other than tantalising glimpses on Acustica's Instagram feed, it's not always been obvious exactly what it will do! My interest piqued, I persuaded the developers to grant SOS exclusive access to a late prototype, a month or two before the product's scheduled release. And having now used Modula intensively for a couple of weeks, I feel it's already worth shining the SOS spotlight on it.

First, the branding warrants a quick explanation. Quantica is a company formed to house this joint venture between mixing and mastering house Studio DMI (https://studiodmi.com) and plug-in developers Acustica Audio. The pair have worked together previously to develop Acustica's impressive Diamond Color EQ (first version reviewed in SOS July 2017: https://sosm.ag/AcusticaDCEQ ), Diamond Lift EQ and El Rey compressor. All Acustica's plug-ins are high-quality emulations of real analogue gear, created using a very different technique from that used by most developers. We've described their approach many times so I won't go into detail here, but as a basic understanding is required to 'get' why Modula might be a big deal, here's a quick overview. Essentially, instead of measuring analogue gear and modelling its behaviour in code, Acustica capture thousands of impulse responses and use a proprietary engine based on their 'Vectorial Volterra Kernels Technology' to determine which impulse(s) will be used to process a signal at any given time. You can learn more about it at www.acustica-audio.com/pages/engine if you want but the key 'take-away' is that while it's a relatively CPU-intensive approach, it's capable of remarkably accurate emulations.

Essentially, Modula is a touchscreen–friendly virtual mixer whose channel strips are Acustica plug-ins with a custom GUI. But the bigger picture is more nuanced. Modula was conceived as a companion to your DAW rather than a replacement for it, so it doesn't do any actual mixing — the channel routing and summing is left to your DAW — and it doesn't (yet?) offer any DAW control facilities. Rather, it acts as a convenient control surface for Modula-compatible plug-ins that are hosted in your DAW.

The idea is that by laying out many channel strips of Acustica processing, with every strip offering a choice of preamp, EQ and dynamics emulations, you can enjoy both a convincingly 'analogue' sound and a speedy, intuitive analogue-style workflow. I don't think the developers would mind me saying that there's still plenty of potential for further improvement — they already have a long list of features they plan to add over time — but I believe that if you make the effort to develop a suitable workflow, Modula already delivers the intended benefits. How else would you fit 15 separate channel-strip plug-ins on-screen at a size that makes them all usable? Even if you could accommodate that many instances, you'd be very hard-pressed to arrange the GUIs in a way that allowed space for your fingers to operate a touchscreen.

In some respects, then, Modula is competing with other channel-strip products like Harrison Mixbus, say, or Softube's Console 1 controller. And Modula's touchscreen friendliness might put Slate's Raven or Devil Technologies' DTouch in mind. But really, it's very different from any of those — and, of course, none of them have been designed to work with Acustica's unique plug-ins.

Modula's 'mixer' can scroll in banks of 15 channel strips up to a number that would exceed the capability of pretty much any current computer — if there is an upper limit, I never reached it. This brings us to the question of computing horsepower, because although the Acustica engine is frequently updated, and each refresh brings efficiency gains, these plug-ins still consume more CPU cycles than equivalent modelling plug-ins.

Until recently, my studio machine was a nine-year-old Windows 10 computer based on what was once a high-spec processor — a first-generation Intel Core i7 965, with four 3.2GHz cores (eight threads). Like my 2018 MacBook Pro (six-core Core i7, 2.6GHz), this could run enough Acustica plug-ins to be useful in mixing or mastering but nowhere near enough to support, say, a 48-channel Modula console. Indeed, for mixing with Acqua plug-ins on these machines, I've used my DAW's freeze/bounce facilities often, reserving 'live' Acqua processing for group busses, the stereo bus, and major elements such as the lead vocal. The quality of the Acqua plug-ins justified that approach. 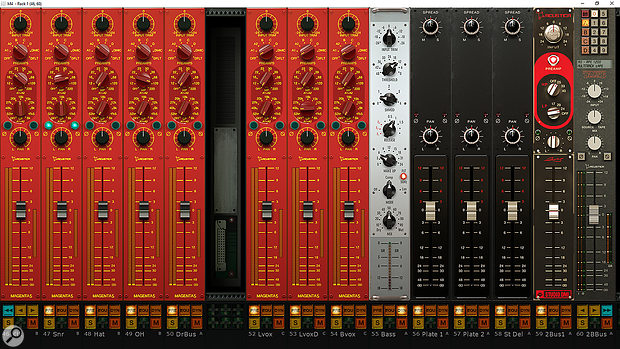 Here's part of a typical large mixing setup inside Modula — note that we're up to 60 channels of Acustica processing running on one Windows PC, without any trouble! The empty channel and the three M4Chan utility plug-ins used on the project's main effects returns help to break the mixer up visually, which I found a useful navigational aid.

But computing power has moved on. Recently, I invested in a PC with a Core i9 9900K eight-core (16-thread) processor, built and overclocked to 4.9GHz by UK-based audio-PC experts Scan. It's a great machine but not expensive as professional machines go — you can buy more powerful models. This PC doesn't break a sweat running Modula with many channel strips: I gave up counting when I got to around 45 instances of Magenta 5 (see 'Pricing & Bundled Plug-ins' box) with preamp, EQ and compression all engaged. Running with Cockos Reaper, Windows 10 Home, and an Audient iD4 interface with a 256–sample buffer, Reaper's performance meters told me this was using about 48 percent of the CPU. So running something like a 24-channel mixer should be well within the capabilities of a more modest machine, particularly if you were to increase the buffer. But if computing power is a concern (perhaps you're running other thirsty plug-ins too), it's worth noting that Quantica have plans to implement a server version in the near future, rather like Acustica did with Nebula 3, and I'm told that will allow you to run Modula processing on a networked computer, taking the strain off your DAW.

Modula is a standalone application, which you must boot before firing up your DAW project. When I ignored the instructions and booted in the incorrect sequence (I had no manual to hand, but I'm assured one is being written) I observed some glitchy behaviour of controls and meters. When I got the sequence right, these problems were absent. To close Modula, you must first close your DAW session: Modula will unload its channel strips, and you can then close it from the system tray. Modula's settings, including the channel order, are remembered when you next load the same DAW project. 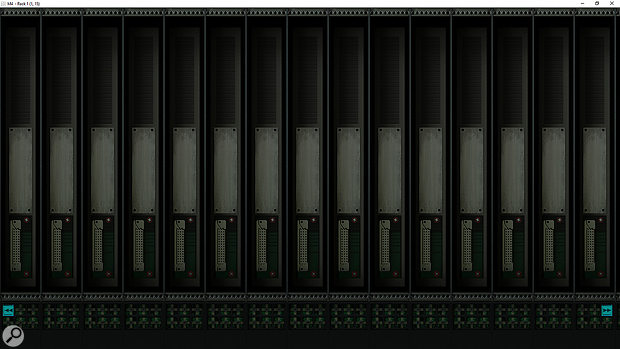 When first launched, Modula appears as an empty mixer. To populate the channels, you must load Modula 'Skin' plug-ins in your DAW.

The application initially presents as an empty virtual mixer frame, in the gorgeous-looking skeuomorphic style I've come to expect from Acustica; you even see the 'sockets' where the virtual strips will be 'plugged in'. At the bottom, each slot has the same set of controls. There are mute and solo buttons, a mute/solo group function (solo a channel and only others in its group will be muted), and a channel label that's empty by default. Once the mixer is populated with channel strips, three buttons allow navigation of each strip's three sections (the leftmost and rightmost channels in the current bank have a two-button scroll/tab facility, with the third button becoming a bank-scroll facility). And you can grab and move a channel to reorder the mixer.

With Modula running, you load your DAW project and instantiate your chosen Modula 'Skin' (their term for a Modula plug-in) in the usual way. 64-bit AAX and VST2/3 formats are available for both Windows and Mac, as well as AU for Mac only. You can easily spot these Skins in your DAW's plug-in list by typing 'M4' in the display filter — all Skins' names include that phrase. Each Skin has two GUIs: one in your DAW, where it functions like any other plug-in, and one in the next available slot in Modula. These are sync'ed, so that tweaks made using one are reflected in the other; they control the same underlying processing. 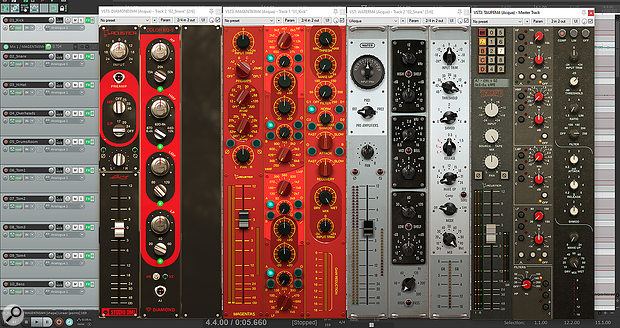 Some of the Modula plug-ins as they appear in your DAW, with all three panels visible simultaneously. The two on the left, Magenta 5 and Diamond Color EQ, are included with Modula. The others, Water and Taupe, are prototypes supplied for evaluation — they'll be paid plug-ins, but won't be publicly available until after Modula is released.

The version in the DAW is divided into three vertical sections — Pre (preamp), EQ, and Dyn (dynamics) — and you see all three simultaneously. So it's basically an Acqua plug-in with a different GUI. The GUI in Modula has the same layout, but displays only one of these sections at once; Pre (which includes not only the preamp emulation but also the pan and fader controls) is the default view. The aforementioned three buttons at the bottom of each channel allow you to choose which section of its Skin is displayed. This neat arrangement allows a narrower GUI, and thus those 15 channels to be accommodated on screen. It works well. My only criticism is that I could find no way in this prototype version to switch the view for all instances at once; I hope that feature will be considered, perhaps as part of a more generally beefed-up grouping facility, as it could be a real time-saver.

I enjoyed getting hands-on with the touchscreen in a way that I find I don't with DAWs... and the layout encouraged me to stay focused, avoid distractions and thus make decisions quickly.

One of the most enticing things about Modula is that the GUI has been designed for touchscreen use. You aren't required to use a touchscreen, but if you do it will make a whole lot more sense. A 27-inch 1920x1080 touchscreen like my Acer T272HL is perfect, making all the buttons, faders and knobs the optimum size, and putting sufficient space around each control that you aren't forever hitting the wrong thing. It also means that the faders are about the same size as typical long-throw faders on an analogue console. I wouldn't recommend using a smaller touchscreen, and while it will work on a larger one there's little to be gained. I'm told that in Acustica's studio, they have a system with five screens, three of which are touch-capable... the mind boggles!

It's intended that Modula will eventually support full multi-touch operation, which would allow you to adjust multiple controls or faders simultaneously, but at the time of writing this was not yet the case — I could only move one control at once, and I don't believe this will have changed by the time Modula is released. That might not please those who dream of grabbing fistfuls of faders, but I don't think most of us work like that in the real world; although I often hover my fingers over a few controls I very rarely move two simultaneously (it's one reason I gave up on multi-fader control surfaces; they occupied more space on my desk than I felt they justified).