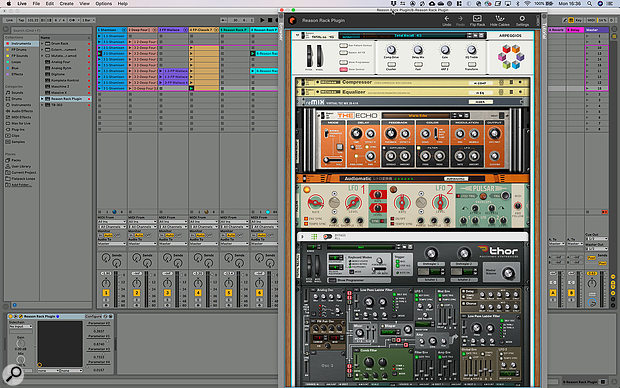 The Reason Rack running as a plug-in within Ableton Live.

Version 11 introduces the most radical development in Reason's long history: the Reason Rack now runs as a plug-in within other DAWs.

If you were asked to explain what Reason is, you'd probably describe a virtual rack of virtual music gear where you can put together synths and samplers, drum machines and effects, sequencers and arpeggiators. This virtual rack has been at the core of the program throughout its 20-year evolution into a complete DAW and mixing package.

That evolution has seen the Rack joined by a multitrack recording timeline and an epic SSL-esque mixer. In the process, Propellerhead — now Reason Studios — have done their best to keep the mixer linked into the original virtual studio rack, but I've often felt part of the compelling intuitiveness of the original experience got clouded along the way. So, while I enjoy working in Reason stand-alone, as often as not I use it as a sound source and sonic playground running as a Rewire client alongside Live or Pro Tools. However, linking up two applications in this way makes for a complicated workflow, and can be off-putting for beginners. Reason 11 thus introduces a new way to work: using Reason, or more specifically the Reason Rack, as a plug-in, placing Reason's devices and modular patching environment inside your favourite DAW.

The ability to run Reason as a plug-in is not the only thing new in version 11, but it certainly dominates the release. The feature list does also include a couple of new premium effects devices, independent modules with the signal processing from the Reason mixer, and a few updates to the Sequencer, but if Reason is your primary DAW and you don't need the plug-in, you're probably wondering if this is enough to justify updating. However, alongside the Reason 11 launch, Reason Studios are introducing Reason Suite, a collection which includes nearly every extra instrument, effect and Player they've ever made. If you're an existing Reason user who's not already invested in most of the awesome Rack Extensions like Complex-1 or Parsec then the Suite upgrade price should look tempting.

When I ran the Reason 11 installer, both the stand-alone Reason program and the plug-in were installed; there wasn't an option to install one without the other. Currently, only a VST3 version of the plug-in is included; AU will follow later for Logic Pro users, and I hope Reason Studios consider an AAX version.

In Live the plug-in showed up as both instrument and effect variants. After I dropped the instrument version onto a MIDI track, the plug-in window popped up and presented me with a start screen showing thumbnails of a few Reason instruments. I clicked on my favourite Reason synth, Grain, and it appeared in the Rack and was immediately playable in Live. This is perfect for anyone who simply wants to use individual Reason devices in their DAW without thinking about patching.

To get at the full menu of Reason devices, there's a pop-up floating in the Rack, or you can open the Browser. Just like in Reason stand-alone, the Browser appears as an extra pane to the left of the Rack, and provides drag-and-drop access to all devices, patches, samples and system-level files. The Browser is the same whether you're in the plug-in or stand-alone app. All my patches, Refills, and favourites were how I'd organised them before. Add-on devices in the Reason's native Rack Extension format are all available inside the Rack plug-in: this is not a cut-down or simplified version of Reason. An exception, though, is that although VST plug-ins are supported in the stand-alone version, they cannot be hosted (nested?) inside the plug-in. 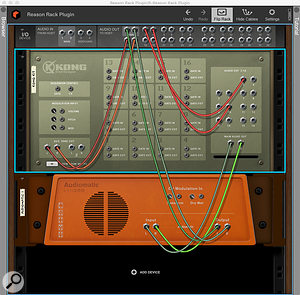 Reason's auto-cabling takes care of most patching for you, but you can flip the Rack plug-in to the rear view and manually patch different input and output buses.The Reason plug-in uses auto-cabling in much the same way as Reason always has: drop in an effect device after the first instrument, and audio connections through the device will be organised for you. Of course, Reason is famous for its manual patching with virtual cables in the iconic back-of-the-rack view. In the stand-alone version, you hit the Tab key to flip the Rack. In the plug-in there's a Flip Rack button instead, sitting on a toolbar along with Undo/Redo. My Reason muscle memory refuses to update itself here, so after weeks I'm still inadvertently switching Live between Session and Arrange views. Plug-in developers can choose to intercept keyboard commands when their plug-in is focused (for example, the Maschine's plug-in uses Tab to toggle its mixer view). However, I think Reason Studios made the right call here, as this way is consistent within the DAW and avoids confusion.

Adding and using individual Reason devices is a piece of cake, but if that's all you ever did, you'd be missing out on Reason's power (and fun) as a modular environment. However, it might not be apparent to a new user how to see examples of multi-device patches: the Reason plug-in browser doesn't have a way to save the whole rack, equivalent to a Reason Song File. Instead, the plug-in works with the standard VST plug-in preset system, so snapshots of the plug-in are saved into your DAW's library, but there are no factory presets in this format.

Reason has a special device called the Combinator that wraps up groups of other devices into a container and provides a custom macro panel. Many of the patches in Reason's fantastic sound library are stored as Combinators, and these are available in the plug-in. 'Combis' also provide a means of moving patches between the plug-in and stand-alone versions, but Reason Studios could probably make the library more accessible to someone coming fresh to the plug-in. Perhaps there needs to be a VST preset version of the Reason Sounds bank, or maybe it needs to be standardised around the Combinator — or, ideally, an updated Combinator with more macro controls?

Reason has always had a virtual Hardware Interface at the top of its Rack, which is used to route audio connections in and out of the software. Usually the Mixer sits between this I/O and the Rack devices, although if you've ever used Reason as a Rewire client, you've probably bypassed this and connected devices directly to the virtual patchbay.

The Rack plug-in (which doesn't have the master mixer) uses this same hardware interface concept to bus audio in and out of your DAW. The 'I/O Device' sits at the top of the Rack and provides four inputs and 32 outputs. Again, much of the time, connections here are automated for both instrument and effect variants of the plug-in, but you can patch manually to route multiple outputs from the Rack, or bring in a side-chain signal. A typical application of this would be to send the different channels of one of Reason's drum machines out to different DAW tracks.

Within the rest of the Rack you can patch CV and audio signals between devices, just like in Reason. As well as instruments and effects devices, all the classic utility devices are present: mixers, CV splitters and mergers and, best of all, the Matrix step sequencer and Arpeggiator.

You also get Players. If it's been a while since you checked out Reason, these are among the most significant developments in recent times. Players are, in essence, MIDI effects that snap onto an instrument and process or generate notes. They can be used for scales and chords, arpeggios and note echoes, but there are also Players that are full-blown drum sequencers or polyphonic note sequencers.