There is one significant difference between the way the Reason plug-in and the stand-alone Reason program connect to the outside world: the plug-in is very limited in terms of MIDI. Each instance of the plug-in has a single Omni-channel MIDI input, and no MIDI outputs.

I discovered quickly that I couldn't recreate how I've worked in the past with Rewire, ie. to use just one Reason Rack containing multiple instruments, triggered from different MIDI tracks in Live. Whereas most multitimbral instruments or modular synth plug-ins let you route different MIDI channels to different sound sources, the Reason plug-in ignores channel information, so all instruments in the Rack will respond to incoming MIDI. Reason Studios say that when researching the plug-in, they found most users opted for separate instances on each track, with one Rack per sound source. This totally makes sense, but it does lose some of the charm of setting up a unified performance Rack with all your devices set out in front of you, able to interact with each other.

The Rack plug-in does not have Reason's Remote technology, the system that allows manufacturers of hardware controllers to script intelligent integrations with Reason's devices. Nor does the plug-in have a MIDI learn function for quickly taking control of parameters using MIDI CCs. However, parameters on devices will work with your DAW's automation system. In Live this means adding them as you need them in Live's device view, where they can then be mapped to a controller.

Finally, lack of MIDI Out is a shame. The Rack's External Instrument device, used to connect note and gate sources from Reason to the outside world, is missing from the plug-in. It would be great to be able to use Reason's various sequencing devices and the awesome Players to trigger other tracks in your DAW.

My initial thought after testing the Rack plug-in was that I'd probably still use Rewire sometimes. I still have unfinished projects set up like that, and there are times when I want to work in Pro Tools. More importantly, I often start a song in Reason stand-alone, then want to hook it up to Live or Pro Tools later. On those occasions I'm using the Reason Sequencer, so appreciate Rewire's ability to sync my transports as well as route audio and MIDI.

But I'd missed the key fact that Rewire is gone from Reason 11. So that's that. I get that it's complicated to use, and is a complex bit of code to maintain through OS changes, and I'm aware that I'm probably in the minority, but this is a disappointing development for me.

Looking forward, then, I now need to use Reason 10 (which is not overwritten by the 11 installation) to finish those old songs, then figure out a new way of working. Ironically, it's probably going to mean I spend less time in Reason stand-alone, as it will be difficult to progress songs started in the Reason Sequencer in my other DAWs, short of exporting audio files.

For the stand-alone Reason user, the Sequencer has had a number of welcome improvements. Grid snapping can now be absolute as well as relative, so you can move things directly to the grid instead of keeping the original offset. This is a mode change; a momentary modifier key would be nice.

The Sequencer gets some new features in v11, such as curved automation and crossfades.

Audio clips finally get crossfading. There are some peculiarities to the implementation: you need to enable crossfading on a per-clip basis, after which a fade will appear when you drag that clip across a preceding one. If you want to create a centred crossfade between two clips without moving them, you need to enable the crossfade (on the second clip), then trim out both clip boundaries individually until you get the desired fade. Once a fade exists, though, it's pretty easy to trim it and adjust its centre point.

Answering another popular request, you can now draw curves into automaton and MIDI CC graphs. Hover the selector over the line between two points and it becomes a curve tool that will bend the line. Additionally, if you Shift-click with the Pencil tool you can add a breakpoint on the existing automation line, so you can create an edit point without disturbing the surrounding data.

Another Pencil Tool improvement is drawing in multiple MIDI notes. If you hold Alt/Option while drawing you'll add a string of notes on the current grid. Individual MIDI notes can now be muted within clips. Finally — and this might sound sad — my favourite new feature is being able to zoom track heights independently. Sometimes it's the little things!

However much work a developer puts into an update, there will inevitably be things on your personal wishlist that don't get done. For me, the most significant thing that's not in Reason 11 is any update to its graphics. The Reason Rack still doesn't support 'retina' graphics, or resolution independence. It's beginning to look a bit small and fuzzy around the edges on today's high-density displays. We know they can do it: Reason's flagship synth, Europa, is available as a separate VST plug-in and has a glorious, resizable high-resolution panel.

As a stand-alone user, I'd love to see the Sequencer's much under-used Blocks feature developed into a real-time scene system, which would be a real boost to both live performance and song arrangement. It's great to see that there were at least a few Sequencer improvements in this version, sending a message that Reason Studios aren't giving up on stand-alone at the expense of the plug-in.

Go Up To Eleven?

Of all the changes that Reason has gone through, turning the Reason Rack into a plug-in is probably the most important. It will be handy for current Reason users, but more importantly, it opens the shop to the many users of other DAWs. In this context, Reason 11 is a monster modular instrument and effects collection with huge depth and creative potential. It's also a lot more accessible than the various virtual modular synths on the scene, as many of its modules are complete working devices rather than component-level blocks.

If you're a pure Reason user who doesn't need the plug-in then the update currently looks a bit thin, but do investigate the significantly discounted upgrade to the new Suite package if you're craving a fix of new Rack toys. Either way, Reason Studios have a history of dot releases that deliver meaty features between paid updates. On that note, while the plug-in has a few gaps (and no Rewire to fall back on) this is, after all, the first version and will continue to develop. Overall this is a really solid first iteration of a new and exciting direction. 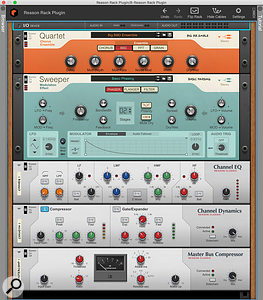 All the new devices in Reason Standard. There are two brand-new modulation effects, and rackmount versions of Reason's mixer processors.No Reason upgrade would be complete without some new devices, and Reason 11 has two new premium effects. Sweeper is a modulation effect with three discrete modes: Phaser, Flanger and Filter. The Phaser and Flanger are really sweet and sound great on most material. The Filter, which has multiple modes and a Drive stage, is a bonus that could have been justified as a separate device.

The defining feature of Sweeper is the modulation section. There's a conventional LFO, but more interesting is the envelope section, which can be switched between a manual custom shape and an audio follower. The envelope designer is the same one we've seen before on a number of Reason instruments, but what makes Sweeper particularly fun and useful is the Audio Trig feature. This lets you set a threshold for the input signal to self-trigger the envelope.

Quartet is a more compact device, as it doesn't have the envelope section. It's a chorus and ensemble effect with four different modes, providing a lush palette of glossy spatial and thickening effects. The BBD mode is considerably more dramatic than the regular chorus, returning instant Banshees goth as the default. Dialled down it provides a lovely warm space that for some reason made me think "classy '80s", if that's not oxymoronic. FFT mode provides a band-limited chorus, and the Grain mode uses a grain cloud instead of delays to create the ensemble effect. All in all, a really nice couple of additions to the Rack.

There are in fact another three devices added to Reason in version 11, although they're not technically as new as Sweeper and Quartet. The Master Bus Compressor, Channel Dynamics and Channel EQ are rackmounted versions of the signal processing in the Reason mixer. The primary reason these modules have been extracted from the main mixer is to make them available in the plug-in version of Reason. The bus compressor is a particularly nice effect to have access to in other DAWs, and even in Reason stand-alone, these devices could come in useful in Combinators and other group patches. 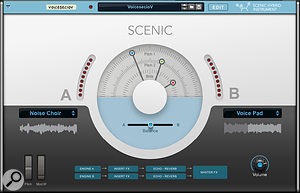 The new Scenic instrument is included in Reason Suite.Reason 11 is launched as a new three-tiered product offering that mirrors Ableton Live's Intro, Standard and Suite naming structure. Suite is new, and for a touch under £500$600, gets you pretty much all the premium add-ons Reason Studios offer for Reason. This includes the Complex-1 modular synth, which is the best thing in Reason since Grain. You also get the Parsec spectral synth, which is a big favourite of mine.

The big new synth that comes with Suite is Scenic (£89$99 separately). This is a hybrid sampler and granular synth along the lines of Omnisphere. It's designed for easy creation of cinematic soundscapes and features a simple front panel with three macros and a blend control.

For me, these three alone would justify the price, but Suite has other heavy-hitting essentials like Reason Electric Bass and Reason Drum Kits, and the Polar Dual Pitch Shifter. Two of the newest and most powerful Player devices (MIDI effects), PolyStep Sequencer and Drum Sequencer are also included.

With its virtual rack now available as a plug-in, everyone can get a much needed dose of Reason.