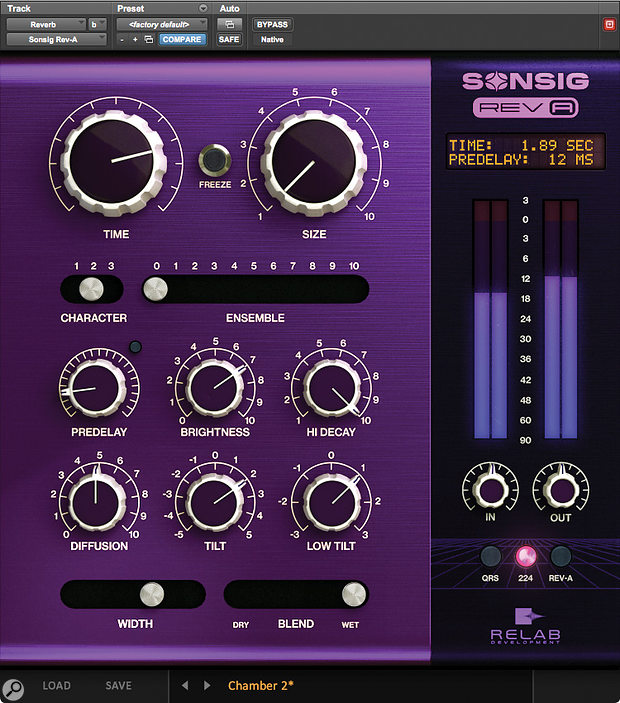 Danish software company Relab Development have been operating 'under the radar' for over a decade, mostly developing tools for other manufacturers. Relatively few products have been released under the Relab name — but that's changing, and the first fruits of their new focus are a suite of reverb plug-ins.

LX480 and VSR S24 are, respectively, recreations of the Lexicon 480L and TC System 6000 VSS6.1 hardware reverbs, but Sonsig Rev‑A is an original design. Relab say that their aim is to combine high-end professional sound quality with the ease of use of guitar stompboxes, enabling users to dial in the right settings as quickly as possible. Sonsig Rev‑A thus has a large, friendly and very purple user interface, with no page flipping, IR loading, menu surfing or other such atrocities to slow you down. It's available both for Mac OS and Windows, in all the major native formats, and is authorised using the iLok system.

Unlike most algorithmic reverbs, Sonsig Rev‑A doesn't differentiate between early reflections and the reverb tail, at least from a control point of view, which is partly why the user interface is so uncluttered. The two largest dials are reverb Time and Size. These interact with one another, so you can, for example, achieve a two-second reverb by turning the Size down and the Time up or vice versa. The RT60 may be the same in both cases, but the sound certainly isn't! A large-but-short two-second reverb has an expansive and relatively natural room or hall sound, whereas a small-but-long two-second setting produces something more akin to a highly reflective chamber, with that elusive quality that Paul White appropriately describes as sounding 'steamy'.

The Diffusion control ranges from cold, slightly austere and gritty to lush and enveloping, and delivers usable results throughout the range of its travel, which isn't always the case. I'm not sure I can say the same for a Pre-delay function that goes all the way up to 800ms, but it's easy enough to dial in the setting you want, and it can be sync'ed to host tempo.

There's also a clear sonic difference between the Character settings. These are adjusted using a simple three-position switch, but there's obviously a lot more going on behind the scenes. In the first position, the reverb tail seems to kick in pretty much straight away, while the other two offer progressively slower build-up of reflections. The all-important modulation in the reverb tail is likewise controlled by a single slider labelled Ensemble, but again, this is clearly adjusting multiple parameters within the reverb algorithm. There seems to be some modulation within the tail even with Ensemble set to zero, but it's relatively subtle and quite natural, suggesting real spaces rather than special effects. As you turn it up, you get progressively more pitch variation, which can be distracting on some instruments but adds a welcome charm and thickness to others, and never quite becomes ridiculously over the top.

Sonsig Rev‑A does not have conventional equalisation controls: instead, the tonality of the reverb is set using Brightness, Hi Decay, Tilt and Low Tilt parameters. Brightness introduces a low-pass filter, while Hi Decay determines the degree of high-frequency absorption in the synthesized space — in most natural environments, high-frequency energy is more readily dissipated than low frequencies, so the top end of the reverberation dies away more quickly. Tilt is, as the name suggests, a sort of 'tilt EQ', which rebalances the levels of low and high frequencies around a central fixed point, and Low Tilt is more like a separate damping or absorption control for the bottom end.

All of these work very well, though it isn't immediately obvious which way round some of the controls function. Positive Low Tilt values produce a tilt away from the low frequencies, which wasn't what I expected, but this only took a second to figure out.

On stereo reverbs, I imagine many of us default to leaving any Width setting at its maximum value; here, that delivers a super-wide sound which is certainly impressive, especially on headphones, but I often preferred the results that I got by backing it off somewhat. A good test of an algorithmic reverb is how it fares when the mix is collapsed to mono, and with any Width setting below 75 percent or so, Sonsig Rev‑A scores very highly in this regard. Mono reverbs can be surprisingly useful in mixing, and Sonsig Rev‑A retains its richness no matter how narrow you make it.

Finally, the three buttons on the right-hand side beneath the meters and gain controls shouldn't be overlooked, because they make a surprisingly large difference to the sound. Each selects a 'render mode', the first two of which are based on the Quantec Room Simulator and Lexicon 224. I particularly liked the QRS setting, which is quite dark, can be somewhat gritty, and seems to fit perfectly in the mix, obliterating at a stroke problems with splashy sibilants and so forth. The 224 setting is also very pleasant, applying a much gentler but still obvious high-frequency roll-off. Rev‑A gives you the full-bandwidth experience and can be much brighter than the other settings.

They say it's preset number 1 that does the most to sell a synthesizer, and if the same is true of reverb plug-ins, Sonsig Rev‑A will fly off the shelves. It actually took me quite a while to start exploring the controls simply because the default patch is so 'right' on almost anything! Once you do start tweaking, you quickly begin to appreciate the sheer range of sounds that is on offer from relatively few parameters. Any parameter can be locked simply by clicking on its name, in case you want to recall other aspects of a preset whilst retaining the same wet/dry balance or other setting.

Mono reverbs can be surprisingly useful in mixing, and Sonsig Rev‑A retains its richness and complexity no matter how narrow you make it.

As is probably apparent from the foregoing description, Sonsig Rev‑A belongs to the tradition of algorithmic reverb design that was pioneered by Lexicon in the late '70s and early '80s, and is best seen as a refinement of existing technology rather than striking out in a new direction. As such, it shares the good qualities of those old hardware units, but updates them with a sound that can be more hi-fi if you want it to. Like most algorithmic reverbs, its recreations of mechanical reverberators such as plates are more suggestive than pinpoint, but unless you need a very specific vintage sound, you'll never be stuck for settings that actually work.

I particularly liked Sonsig Rev‑A as a vocal reverb, in which role it offers everything from subtle ambiences to dense chambers or expansive halls. Whereas some reverbs become metallic or 'bark-y' at very short settings, this one sounds great, adding thickness and life to the source without overwhelming it. And it's not only the variety of sounds on offer that make this such a useful tool: it's also the speed with which they can be dialled in. With a few quick twists of a knob you can get nuanced studio spaces, splashy tiled rooms, understated theatres and cavernous barns, with no need to switch between algorithms or select different room types. Don't be fooled by its simplicity: this is a thoroughly professional, high-quality algorithmic reverb that also happens to be incredibly easy to use.

Relab have drawn ideas from the best algorithmic reverbs of the past to create a plug-in that can cater to almost every application at the turn of a dial. If you appreciate a good-sounding reverb but don't like to be slowed down by complex user interfaces, Sonsig Rev‑A could be perfect for you.