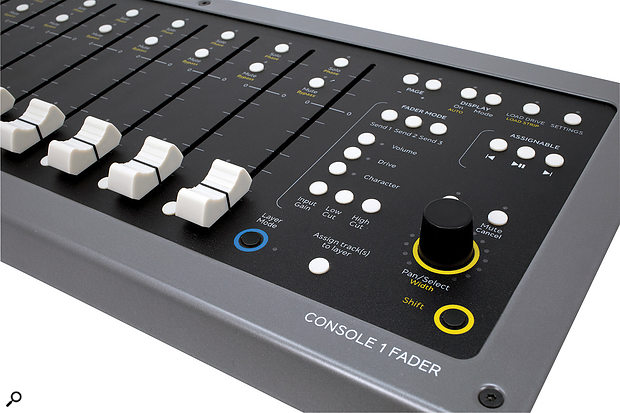 Softube's alternative mixing environment has grown faders — and they do much more than just fade!

For as long as software mixing has been a thing, there have been things to make it less like software mixing. A pointing device isn't necessarily the best means of adjusting hundreds of parameters, often simultaneously, so all DAW software supports alternative controllers such as fader surfaces, jog/shuttle wheels, rotary encoder banks and so on.

However, the problem for any manufacturer making these devices is that 'support' means different things in different DAWs. Older standards such as MCU and HUI are reasonably universal, but offer only limited control, while others such as Eucon are proprietary. Add to the mix the need to control parameters in third-party plug-ins, and the fact that there are significant operational differences between DAWs, and you have a situation where it's almost impossible to create a generic controller that gets the best from each DAW.

Launched back in 2014, Softube's Console 1 presented a radical solution to this problem: a DAW controller that isn't a DAW controller at all. Console 1 is actually a controller for the Console 1 plug-in. In effect, inserting this plug-in on every channel in your mix creates another mixer — an officially licensed emulation of the SSL 4000, no less — that 'piggybacks' on top of the DAW's own virtual console. As the feature set of this mixer is determined by the plug-in rather than the host DAW, it's the same in all supported host programs. The Console 1 controller can thus be designed very tightly around the specific features of the Console 1 plug-in, achieving a depth of integration that isn't really possible with generic DAW controllers.

Console 1 also represented a fairly radical rethink of what we might want a hardware controller to do. Previous DAW controllers typically behaved like scaled-down sections of a large-format console, with the main feature being a bank of faders to adjust multiple channel levels at once. The Console 1 controller is always focused on one specific channel, and doesn't even have a single fader; rather, it's designed to give you immediate hands-on control over channel-strip processes such as gating, EQ and compression.

Since its launch, Console 1 has attracted many devoted users. Its popularity has been boosted by a drastic price cut that was enabled by moving production from Sweden to China, and by the availability of add-on mixer packs that provide alternative EQ, compression and saturation algorithms modelled on other well-known large-format consoles. Should the SSL 4k sound not be your bag, you can now draw on SSL 9k, American Class A, Summit Audio Grand Channel and more. DAW developers have made setup easier, for instance by implementing automatic transfer of track names and numbers to the Console 1 plug-in, and a tie-up with Universal Audio now makes it possible to load many UAD2 plug-ins within the Console 1 framework, and to use Console 1 as a controller for the UAD Console mixer.

Console 1's popularity is well deserved, but because it makes it easier to add processing than to change the channel volume, you can end up leaning on compression where it would really be better to make some fader moves. If you use Console 1 as your sole controller, it also gets frustrating to have to return to mouse or keyboard to start and stop DAW playback. With so many faderless and transportless Console 1s out there, there's an obvious market for a companion unit that would fill in these gaps. That unit has been a long time in the works, but finally, Console 1 Fader is here.

Console 1 Fader is a pleasing visual match for the original, and its construction gives an equally reassuring sense of solidity. In place of Console 1's numerous rotary encoders, however, the main feature here is a bank of 10 touch-sensitive, motorised 100mm faders, each accompanied by a small eight-LED meter and three buttons. My only, very minor, cricitism of the Console 1 Fader's physical design is that the meter LEDs are tiny and tend to become invisible unless you're looking from directly above. The faders have a good, consistent feel and move smoothly and precisely, and providing 10 rather than the usual eight is a masterstroke, ensuring Fader will feel much more natural to anyone not brought up counting in binary. To their right is a compact but not crowded collection of 23 further buttons, along with a single rotary encoder. 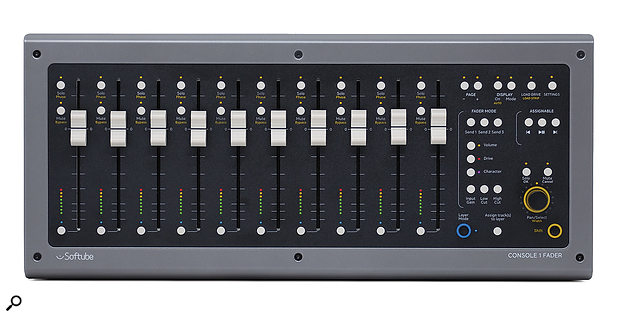 The Console 1 Fader complements the original Console 1, adding transport controls as well as 10 faders that can be used for many other purposes besides volume balancing.

The labels on all these controls give a pretty good indication of the basic functionality that's on offer. Under Fader Mode you'll see that the faders can be switched to control not only channel volume, but several other parameters within the plug-in too: Input Gain, low and high-pass filter cutoff, and the level and Character of the Drive algorithm. There are also buttons labelled Send 1, 2 and 3, of which more presently.

The button at the base of each fader acts like the Select Track buttons on Console 1, bringing the selected channel into focus; it's also possible to set it up so that touching a fader automatically selects that channel. One of the key differences compared with Console 1, however, is that there are only a few Console 1 Fader actions that are specific to the focus channel. Of these, the main one is pan position, which is adjusted using the rotary. This also does service for scrolling through menus when needed, and in addition, has a neat secondary function on stereo channels: hold down the Shift button, and clockwise adjustment from the centre postion increases the stereo width, while anticlockwise adjustment progressively raises a frequency below which the signal is collapsed to mono. The two upper buttons adjacent to each fader also have shifted functions, Solo doubling as a polarity switch and Mute as Bypass.

The faders can be banked up and down in groups of 10 using dedicated buttons, and there are two other groups of controls worthy of note. The three buttons labelled Assignable have familiar transport symbols beneath them, denoting their default roles, but they can be assigned instead to any key command within the host program. Finally, there are two more buttons dedicated to Fader 1's Layer Mode, which implements a kind of VCA fader setup (see box).

It's probably worth noting at this point that there are also deliberate omissions from the Fader 1's feature set that might bother some people. There is, for example, no jog/shuttle wheel, no master fader, no buttons to arm tracks for recording or automation, and no displays that could show channel names on the unit itself. It is, however, possible to combine multiple Fader units in one setup.

Just as Console 1 makes it possible to get close to a finished-sounding mix using only EQ and compression, so too does Console 1 Fader allow you to achieve a surprising amount with only volume, Low Cut, Drive and Character, without invoking conventional EQ at all.

The first thing you need to do on receiving your shiny new Fader is to redeem the licence code in order to download the software. Softube licences can be managed using the familiar iLok License Manager utility, but a dedicated Softube Central program seems to be the preferred option these days. The process was relatively painless on my Mac, except that for some reason the manual for the Fader was not installed and I had to find it on Softube's website. 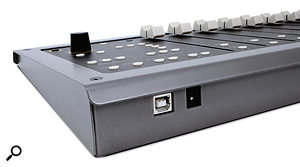 In order to drive the Fader's fader motors, an external power supply needs to be permanently connected alongside the USB cable.One key difference between Console 1 and Console 1 Fader is apparent out of the box. The original unit is bus-powered; the Fader also connects by USB, but requires a 'wall-wart' PSU too. It's hardly surprising that the Fader needs more power, given that there are 10 fader motors to drive, but I could wish that the PSU had a longer cable. And since many Fader buyers will be existing Console 1 owners who will want to place the two units together, it would have been great if the Fader could have included a built-in USB hub. As it is, you're faced with the need to find separate USB ports for each unit, plus a third if you want to use an iLok or eLicenser dongle, a fourth if you're running a USB audio interface, a fifth for a MIDI keyboard and so on.

A conventional plug-in window can't easily be made to follow Console 1, so visual feedback is handled by an application called OSD. This runs in the background, and when you touch or move a control, the OSD window appears as an overlay in front of your DAW (and, indeed, any other applications that are running). OSD can be cycled through a number of different display options which trade off completeness against compactness. It automatically senses whien one or both of the two controllers is connected, and the display options are tailored appropriately.