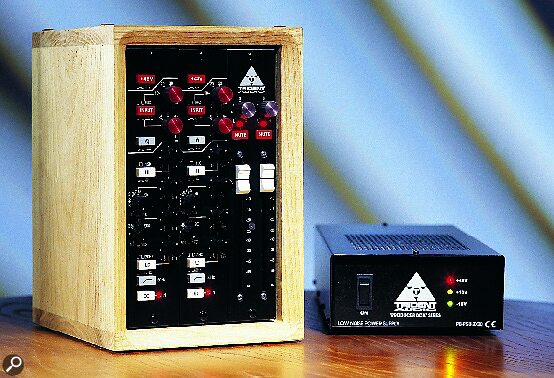 The characteristic sound of vintage valve equipment is well known, but interest is now growing in early op‑amp designs too. One example is the renowned Trident Series 80 console from the 1970s, which has recently been reincarnated in the form of the Oram S80 Producer Box. Hugh Robjohns relives those heady days...

John Oram is, without doubt, one of the most colourful characters of the British pro‑audio industry. Though his career has included stints as drummer, pianist, composer, conductor, electronics designer, restaurateur, chef, yachtsman and business entrepreneur, he is best known for being the principal circuit designer at Trident Audio Developments during the '70s and '80s.

Oram now manages his own company, Oram Professional Audio, and oversees manufacture of a bespoke line of analogue mixing consoles ranging from the £5500 12‑channel Series 4, all the way up to the monster £325000 72‑channel Series 48. Oram Sonics also produce a range of outboard equipment, including the Octa range, the Sonicomps, and the HD equalisers.

The S80 Producer Box is based on the channel strip of the Trident Audio Developments Series 80 console — an Oram design. The Series 80 was, and still is, a highly respected and well‑loved recording desk dating back to the early '80s and posessing a subtle but distinctive sound quality which resulted from acombination of Oram's approach to circuit design (particularly his EQ stages) and the solid‑state technology of the day.

Trident Audio Developments was officially dissolved in 1995 and today there are several companies vying for recognition as its phoenix‑style successor. Oram registered 'Trident Audio Ltd' in September 1999 with the aim of promoting some of his successful designs from that era, over which he retains copyright. John claims to have launched the S80 package in tribute to the success of his former colleagues, and has gone to great lengths to ensure that the S80 resembles the original console channel strip as closely as possible — right down to the style of the buttons, knobs and anodised legends. What's more, the original triangular Trident Audio logo, newly registered by Oram Professional Audio, is proudly displayed above the fader module.

The idea of the S80 box is to allow current engineers and producers access to the characteristic Series 80 sound — reproduced as accurately as possible, complete with all its quirks and foibles — but in a modern, convenient package. To that end, the unit features two independent channels, each with a transformer‑coupled mic preamp, a line input, four‑band equalisation and conductive plastic 100mm fader. There are a couple of minor technical changes from the original console strip design, such as the inclusion of fully balanced inserts, switchable phantom power and an amended high‑pass filter. The package also differs from the majority of 'producer preamps' by incorporating real faders with pan and mute facilities. A seriously meaty external power supply is provided, capable of driving up to four S80 units if required.

Whereas the majority of Oram's current product line‑up employ surface‑mount components and modern manufacturing techniques, the S80 is constructed in exactly the same way as the original Series 80 console, even using the same conventional components and assembly methods. The custom input transformer used in the Series 80 is no longer available, so Oram had to dismantle an original example to work out its design parameters. Sowter now manufacture a bespoke replacement which has exactly the same properties as the original, including an identical transient overshoot characteristic.

The elegant Ash box houses three modules: two input units and a dual‑fader output unit. The top of each input section starts with a rectangular red +48V phantom‑power button (not part of the original console strip) which mimics the classic design of the other buttons on the module. A second red button below selects mic or line input, each having independent red metal knobs for gain control. The microphone preamp provides a gain range from 0 to 60 dB whilst the line trim is +/‑10dB. A grey polarity‑reverse button completes the input section.

The remainder of the module is taken up with a comprehensive equalisation section comprising switchable high and low shelving bands, two swept mid‑bands, a fixed high‑pass filter and a bypass switch. For the record, though this is not necessarily relevant operationally, the arrangement of the black rotary controls of the EQ section is the mirror image of that on the original channel strip.

Each of the EQ bands provides ±15dB gain. The two shelf bands can each apply this gain at either of two turnover frequencies, depending on the positions of their associated white buttons: the high shelf operates at either 8kHz or 12kHz and the low shelf at either 60Hz or 120Hz. The two swept mid‑bands have a their own variable frequency controls spanning 1kHz to 15kHz (HMF) and 100Hz to 1.5kHz (LMF) respectively. The fixed high‑pass filter is introduced by a grey button towards the bottom of the module and it operates from 50Hz (50Hz lower than on the original Series 80). A white EQ‑bypass button at the bottom of the module is accompanied by a red LED to indicate when the stage is in circuit. To the right of the two input modules is the third module, containing the 100mm faders, pan controls, red mute buttons, and mute status LEDs.

The rear panel carries a generous array of connectors. Each input module features a three‑pin XLR for the microphone input along with a second XLR and adjacent TRS socket accommodating the line input. The balanced insert point is equipped with a pair of TRS quarter‑inch sockets providing separate send and receive connectors. Unusually, the S80 provides both pre‑fade outputs, direct from each equaliser, and a stereo output which receives the post‑fade, panned signal from each fader. The module direct outputs are each available on both XLR and adjacent TRS sockets, as are each of the two channels of the stereo output. The last connector is a 5‑pin XLR conveying power from the chunky external PSU.

During my visit to The Old Forge, the converted barn in Kent which houses Oram's product R&D department and studio, I was able to audition the S80 alongside one of Oram's original Trident Series 80 prototype modules. The line‑input gains of each unit had been carefully matched and a switch box configured to allow instant comparison between them. Armed with a collection of CDs, I was able to compare the sound between the original console strip and S80 box across a very wide range of both subtle and extreme EQ settings. I was also able to plug a mic in and compare the gain, noise and sonic characteristics of the mic preamps.

One of Oram's assistants had already performed some checks on a Neutrik test set and had produced a set of frequency response plots at various EQ settings for the console strip and S80 box. At unity gain, EQ bypassed, the S80 exhibits a very slight HF droop of a decibel or two at 20kHz which probably plays a part in the smooth, '70s sound characteristic. However, it was impressive to see both sets of traces lying within a dB of each other, with most curves actually overlaying each other precisely. Most of the small deviations between the plots occurred at the frequency extremes and were due to component tolerances. The only obvious difference between plots was in the HMF section, which suggested that the Series 80 boasted a slightly wider bandwidth than the new S80 box. However, this difference was probably the result of an error in the alignment of the control knob — when I tuned the Series 80 console strip by ear to match the sound of a high‑gain, high‑resonance filter set at 9kHz on the S80, the Series 80 frequency control only showed a setting of 7.5kHz. This would not be an issue during use, and was probably a one‑off glitch on the review unit anyway, but it does account for the discrepancy between the supplied plots for the HMF equaliser section. Nevertheless, the overall technical performance of the S80 is excellent, with identical noise floor (below ‑100dBu) to the Series 80 console.

As far as my ears are concerned, the new box sounds absolutely identical to the original Series 80 channel in every way. Although very competent, it is not the cleanest, most neutral preamp/EQ in the world — however, that is its entire raison d'être and many find that its characteristic sound can bring something creative to any party hosted by anaemic digital consoles!

This is a very capable unit with a sonic character many will love to hear and use again, recreating some of the warmth of those early multitrack recordings from recent history.... Apparently, the S80 Producer's Box is already selling faster than Oram can have them built — that '70s sound has become very popular, particularly in the USA. Reach for the platforms and the flares — the Series 80 is indeed reborn in the S80 Producer Box!

Despite the company's confidence in its quality control procedures — products are soak tested and warehoused at the Old Forge, with further re‑testing before shipping — one of the two input modules in the review unit exhibited an obvious instability which manifested itself as a substantial increase in noise when any EQ control was touched under certain high‑gain conditions. Although the second module was found to operate perfectly, this is not the first time I have found this kind of problem in an Oram outboard product. Fortunately, the company maintains a no‑quibble exchange policy for the entire 3‑year warranty period, so potential purchasers can be reassured that their investment will be a safe one.