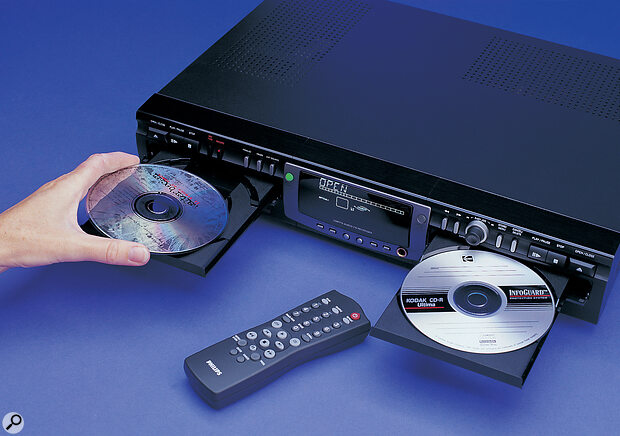 Gordon Reid tries out Philips' updated dual‑deck CD recorder, and finds that a number of improvements have now made the machine more usable in the studio.

Philips dominate the domestic CD‑R world and, despite the successes of other manufacturers in the pro‑audio field, it claims 80 precent of the current world market for CD recorders. It also commands about 50 percent of the European market for blank discs, doing so again by controlling the domestic market.

Given its dominance, you may be surprised to learn that Philips launched its first consumer CD recorder just three years ago. The CDR870 used a computer‑industry mechanism called the CDU3610, with separate devices for A‑D conversion, D‑A conversion, and digital I/O. Unfortunately, this lack of integration made the 870 expensive to manufacture, so it was never going to penetrate very far into the domestic hi‑fi world. Perversely, its dependence on so‑called 'consumer' blanks also caused it difficulties in professional circles.

In 1998, Philips replaced the CDR870 with the CDR880, and simultaneously added four more machines to the range. Of the new machines, the greatest impact was made by the CDR765 — a dual‑mechanism recorder at a ground‑breaking price.

Mechanically and electronically, the drive and electronics inside the 765 were almost identical to those of the obsolete 870, so it retained its predecessor's dependence on consumer blanks. Furthermore, it suffered from a number of problems, the most damning of which was its penchant for placing audible thumps between tracks recorded individually (in track‑at‑once mode). This made the 765 virtually useless in the studio and, as if that wasn't serious enough, the unit's D‑A converter was audibly inferior to that of even a moderately priced hi‑fi player. Sure, it was astounding value for money, but in crashing through the price barrier Philips didn't get the engineering quite right.

This year, things have improved considerably with the release of another new range of Philips CD‑RW products. The company announced two of these in 1999 — the CDR770 and the CDR570 mini‑size recorder. Of the new models for 2000, the CDR951 is the top‑end machine — remarkable given that it is priced at just £399. The CDR775 (the subject of this review) replaces the CDR765, and there's a new domestic model, the CDR785, which incorporates a three‑CD carousel. Finally, there are the FWR7 and FWR8 'systems' — ugly ghettoblasters with CD changers and CD‑RW recorders.

On removing the CDR775 from its box it's clear that little has changed cosmetically since the CDR765. Installation is simple: plug the power cable into the universal PSU's socket, connect the appropriate analogue and digital cables, and you're ready to go. There's no shortage of stereo inputs and outputs, all of which are provided on phono connectors. Because all inputs and outputs are available both on analogue and digital S/PDIF connections, I could simultaneously hook the machine to my amplifier, my Minidisc recorder, my D‑A converter, and my desk, while at the same time supplying the CDR775's analogue input from my desk and its digital input from a second CD player. And that still left the recorder's single stereo optical digital input unused! The only real omission is that of an optical output, which may frustrate some users.

One Good Turn Deserves Another

Functionally, dual‑deck CD‑Rs such as this are designed to fulfil much the same role as dual‑cassette recorders did, being as simple to operate but just sounding a heck of a lot better. And, where dual‑cassette decks were once decried by record companies as the works of Satan, dual CD‑Rs are probably even more worthy of such condemnation. In this case, it's not helped by the fact that Philips have made it ludicrously simple to flout the law — just stick a commercial CD in the right‑hand tray, a blank in the left‑hand tray, and press Record. Then, depending upon the record mode selected (fast, normal, or 'Make CD') the machine chunters away for a while before presenting you with a shiny, new, almost‑certainly‑illegal CD. In fact, Make CD even finalises the new disc for you! It's no harder using an external source: just select the appropriate input, and away you go. Philips' only nod towards anti‑piracy is the inclusion of SCMS (the Serial Copy Management System) that stops you from making digital copies from an existing digital copy.

Compiling your own CD‑Rs from individual tracks on disparate CDs is not much harder, although you have to program the 775 to record each track individually. I would prefer some form of pause function, for changing source CDs in between tracks, but I certainly had no difficulty using Philips' system. Recording CD‑RWs is, of course, identical to recording CD‑Rs, but with the ability to erase tracks. You are limited to erasing the last track (or tracks), or the entire disc — you can't remove tracks from the middle of a disc — but that's a limitation of CD‑RWs in general, not of Philips' product in particular. I've read a handful of comments suggesting that CD‑RWs might suffer drop‑outs following 2x recording but, as far as I can see (and hear), these claims are completely unfounded on this machine.

You may think that the CDR775's dependence upon consumer blanks regains the moral high ground in terms of copyright, because — in theory — their higher prices are justified by a levy that should be passed back to professional recording artists. However, no‑one has ever collected this levy in the UK, so it seems that it's simply an excuse to extract extra money from consumers.

Returning to the technology, the CDR775 also offers a Synchro Record capability for recording external sources. This starts the recording when it detects an input signal. Unlike earlier Philips CD‑Rs, which clipped the first few milliseconds of an incoming track, the CDR775 handles this correctly — see 'Hitting The Buffers' box below.

Other improvements include CD Text, a system that allows you to embed a description of up to 60 characters for each track, plus a 60‑character overview for the entire disc. Furthermore, if a commercial disc already has CD Text already embedded within it, the 775 will copy this along with the audio — this useful feature has been available on Minidisc recorders for years. The Easy Jog knob is also new on the 775, and a very welcome addition it is too. It lets you select the tracks to play and/or record, scrolls through the 775's menus, enters CD Text, and even doubles as a balance control for both analogue and digital inputs — the latter is, incidentally, highly unusual on a product in this price range. And, while we're on about innovative features, the 775's 'convert everything to 44.1kHz' integrated sample‑rate converter makes it simple to re‑record, for example, libraries of ageing 48kHz DATs. But beware — the conversion is not going to match that of a quality dedicated unit and is best avoided when not needed.

A few final touches include the ability to use the 775 as a dual CD auto‑changer or, in DJ Mode, to use it to play a pair of CDs simultaneously — of course, at this point, the individual analogue outputs become vital, for obvious reasons.

First the good news: discs copied digitally on the CDR775 suffer no obvious degradation compared to the originals. Tests using my own studio material (from both analogue and digital sources) showed that this fared equally well, especially if recorded using the digital input. Equally important, the thumps in track‑at‑once recordings have completely disappeared, even at the higher writing speed. Bravo Philips!

While many aspects of the CDR775 are an improvement on its predecessor, the two machines both suffer from equally mediocre D‑A converters. What's more, the 775 I used actually seemed to be a little inferior to the 765 in reading scratched CDs. However, whether this is a systematic difference between Philips' models, or just the difference between two specific machines' lasers and alignment is something that I can't know for sure without checking dozens of units.

Apart from the quality of the D‑A converters, I have almost no criticisms of the CDR775. Sure, I would like it to be built like a tank, not from moulded plastic, and I don't trust the flimsy CD trays used by today's low‑cost equipment. However, given the ratio here between price and performance, I have no real grounds to complain. In use, I found it almost ludicrously simple. The new screen layout is both clear and informative, and the control logic is straightforward. I never once used the remote control, nor felt the need to do so. Compared to using a computer‑based CD burner and software, it's idyllic.

So, why should you not buy one? Perhaps because Philips may themselves have a more suitable product for your needs. The single deck CDR770 is of equivalent quality but is substantially cheaper, for example. If your prime purpose is to use it in the studio, rather than for ripping off other artists' CDs, why pay more? Alternatively, Philips claim that the A‑D conversion of the CDR951 reaches 'audiophile' standards, which may make it the better semi‑pro choice. But whichever you choose, given its remarkable performance for the price, I can't discourage you from buying one of these units.

Three of the new models (the CDR785 and the two FWR systems) offer an optional Auto Level Control that normalises the levels of tracks when you compile CD‑Rs from multiple commercial CDs. Philips claim that the ALC is not a compressor or limiter, but that the recorders scan the tracks for peaks, and then record at an appropriate level. These models also allow you to record between two markers when copying from one CD to another.

The Loophole Is No More

In the past, you could cheat the consumer blank system. You did this by inserting a consumer blank, allowing the machine to read the special identifying code embedded within it, and then prising open the drive door to replace the disc with a standard CD‑R blank. To me, this always seemed an extreme way to save a couple of quid, and it's now irrelevant... Philips have cured the 'fault' that made it possible.

At the heart of the CDR775 and its siblings lies 16Mb of RAM and a new microcontroller called DASP. These replace some of the components in the earlier models, sorting out many problems, as well as making the new range cheaper to manufacture. In particular, a three‑second audio buffer eliminates the thumps between tracks, and improves the performance of synchronised starts. DASP controls this by recognising a trigger when the input signal passes approximately ‑30dB, grabbing the previous 300mS from the buffer, and then fading the audio in so that there is no glitch at the start of the track.

The CDR775 uses the same buffer to place track markers in the correct position after a period of silence. This means that, whereas previous models would clip the beginning of the music on playback, the new generation does not. Furthermore, if the system detects no signal for three seconds, it goes into a record‑pause mode and dumps the unwanted data from the buffer. This has an extra benefit — if you inadvertently start recording in the wrong place, just press Stop to dump the mistake before you ruin a CD‑R blank.

The CDR775 is an ideal machine for copying CDs, but will allow for both lawful and unlawful use. It's also excellent value for money. However, it's neither the cheapest nor the best‑sounding machine in Philips' range so check out the CDR770 and CDR951 before any buying decision.