TV Music From The Inside By Joris de Man 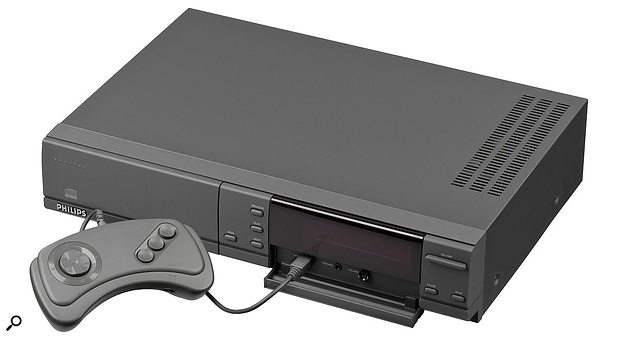 Inexplicably, the CD-i’s glamorous visual design did not lead it to dominance in the fashion-conscious games market.

As media composers, we should be able to turn our hands to anything... shouldn’t we?

Growing up in The Hague, my ambition was always to create music for video games. At the time, gaming was still frowned upon as a bit of a peculiar pastime, like making your own yoghurt or playing Scrabble in a PVC bubble suit. That would soon change with Sony’s Playstation 1, savvily marketed in clubs around the UK as the cool after-party gadget that got people hanging out and playing games until the early hours.

In Holland, however, this craze was still a few years away, and instead of the Playstation, we kept ourselves amused with the giddy excitement of the Philips CD-i console — a sort of primitive precursor to the CD-ROM, powered by the same 68070 processor chip that Philips also used in their premium washing machines.

This Is Jan Hot

After working on a few CD-i releases as a composer, the company I worked with undertook a new project, designed by a fitness instructor. This ‘multimedia experience’ would entice the viewer to “get their lycra kit on, and for the next hour, join Jan on an aerobics journey to get exercising and get fit!” Or so the producer excitedly told me. And it was my job to write some dance tracks.

I’d never written dance music before. Hell, I didn’t even like the genre! But I wasn’t just going to do any old dance track. Growing up on a diet of Front 242, Peter Gabriel and Béla Bartók meant that as an early 20-something, I was still figuring out my musical identity; but, by God, was I going to put my artistic stamp on this! A few days later, I brought my portable DAT to play the producers some tracks. Although one featured a Level 42-like slap bass, wave-shaped drums and feedback-looped pads, they felt danceable enough to me. Surprisingly, my demos weren’t met with the same enthusiasm as my game music; the deafening silence in the meeting room was only overtaken by the dull sounds of photocopiers, and it was decided that to remedy my poor demos, I should ‘immerse myself’ in the material at hand.

The following day I met Jan, the fitness instructor. He must have felt puzzled that this slightly dishevelled teenager was providing the soundtrack to his aerobic magnum opus, but with an energetic spring in his step, he took me back to his fitness studio, which was also his flat. For the next hour, I watched uncomfortably as a sweaty man in a leotard bounced around the room through various aerobic exercises to terrible music, accentuating his sweeping leg movements with shouts of ‘OK, let’s do it!’ whilst rhythmically gyrating his hips. Afterwards, we shared a cup of tea and sat largely in silence.

Always up for a challenge, though, I emerged reinvigorated a few days later with a dance track that urged participants with sampled vocals to “Jam the nightclub! Rock the disco!” It even had a Haddaway-like ‘What Is Love?’ D70 organ hook, a TX81Z bass and punchy 808/909 drums. For the first time in my life, I’d written a proper dance track. But as often happens in life, I found that my enthusiasm wasn’t shared by the man in the leotard. Shortly afterwards, I was told that my services on the project were no longer required. It goes to show that just because you’ve achieved a personal milestone by composing something in a style you’re unfamiliar with, it doesn’t necessarily make for good music.

Luckily, my career wasn’t permanently damaged by this setback. I learned to respect the brief, the gaming industry has become one of the most successful in the world, turning over $91 billion a year, and CD-i mercifully vanished without a trace — although its CPU lives on, helping to keep underpants clean. I sometimes wonder, though, what became of Jan. Maybe he likes a game of Scrabble these days?