Dance Drum Samples is a bargain‑priced sample pack available to download from Original Music. It's a healthy 658MB in size and contains 116 WAV loops, of which 103 are presented in REX 2 format with accompanying MIDI files. The pack also includes 316 one‑shot hits and 106 sound effects from which to create your own loops. Drum loops are organised into four folders according to tempo, which ranges from 70 to 175 bpm, the main stylistic focus being dubstep and drum & bass. 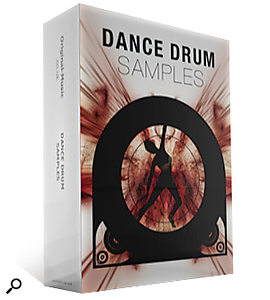 The first thing that struck me when going through the loops is that organisation could be better. Most of the loops have accompanying REX files, but some do not, which can be a little confusing and spoils the feeling of continuity between loops. It's also worth noting that there are some stray temporary files located in one of the REX folders. The other slight annoyance for me is the haphazard way in which the loops are labelled; for example in the 175bpm Drum & Bass folder, some of the loops are helpfully labelled 'Amen' (after the famous drum loop they were inspired by), but the majority are simply labelled with the letters 'A' to 'Z'. In future, I would suggest that the authors find more descriptive names for their loops.

The loops themselves are sorted into four folders: Drum & Bass, Dubstep, Processed Breaks and 135bpm. The Drum & Bass folder of loops is the pick of the bunch, and while not quite as good as those in more expensive packs, such as Big Fish Audio's Full Cycle, they are still very good. Certain loops from the Drum & Bass section, in particular, sound fantastic and could easily form the backbone of a composition. Also, having the loops as REX files extends their flexibility and I had great fun rearranging them in Logic. After the excellent Drum & Bass folder, the Processed folder was a little disappointing and lacking in variation, and the Dubstep folder, while good in content, contains only 16 loops.

The Dance Drum Sample pack also contains a generous 316 one‑shot drum hits with which you can build your own drum kits. The samples themselves sound raw and unprocessed, rather than having a polished studio sheen, with some of the snare samples noticeably buzzing and ringing. They also demonstrate clearly audible hiss, which I found slightly offputting.

Overall, this release is a bit of a mixed bag. I really like the Drum & Bass loops and accompanying REX files, but find some of the other areas of the library less successful. If Original Music focused the pack more tightly around the Drum & Bass loops and made the Processed section more varied, the pack would be stronger, but even as it stands, the low price makes it reasonable value. Geoff Smith