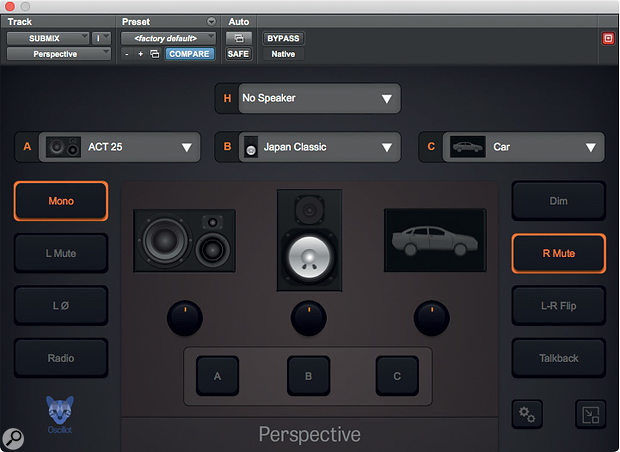 Although the mixers in modern DAW programs offer incredibly powerful processing, signal routing and automation features, many still lack some features that are universally found in large-format analogue consoles. Perhaps the most common omission is the 'centre section' of a hardware mixer, where you'd find alternate monitoring controls, mono and dim buttons, talkback, two-track inputs and so forth. Given enough time and effort, it's possible to recreate most of these functions in a DAW such as Pro Tools by using aux tracks and stock plug-ins, but wouldn't it be more convenient to have it all recreated in a single plug-in?

Perspective, the first product from Oscillot Audio, is intended to fill this niche, but it has another dimension too. The developers recognise that many small studios don't have the space or resources to host multiple monitor systems, so they've created a virtual alternative to physical speaker switching. Buttons labelled A, B and C let you choose three different options from a list that currently comprises 23 models of speaker systems, with trim controls available to match levels. The majority of the virtual speakers are project-studio classics like the NS10, Auratone, ADAM A7 and Genelec 8040, but the list also includes a smartphone, a television and two vehicle interiors, with the nice additional touch of optional traffic noise! Should your own speakers happen to be on the list, you can also employ one of the emulations 'in reverse' by loading it into the slot labelled H. The idea is to cancel out whatever frequency anomalies are characteristic of your own system before applying those of the system you want to emulate, though of course you shouldn't expect to be able to make Auratones sound like ATCs.

Other 'centre section' functionality is provided by buttons that offer mono, left and right mute, stereo flip, left side polarity reversal and adjustable dim. Another engages what Oscillot call a "radio simulation": I had rather hoped that this might emulate the aggressive multiband compression you get on FM stations, but actually it just provides another flavour of 'grotbox'-style bandwidth limiting. Finally, there's talkback, which can be momentary or latching and is set up by inserting a second plug-in called Perspective Talkback Remote on a track with a live microphone input. By clicking the cogwheel icon, you can also open a Settings panel that includes some less-used parameters, including subwoofer management and 'room compensation', which changes the simulation to include early reflections that would be heard as part of the speaker's tonality within a small room.

In practice, the speaker modelling is handy for checking how your mix will perform on a heavily bandwidth-limited system, but I'm not convinced that it's really a substitute for having a second physical pair of monitors. Whilst it can capture the mid-rangey tone of something like an Auratone, it can't make a ported speaker behave like a sealed box in the time domain; nor can it recreate the 'point source stereo' effect you get from a mobile phone, or recreate a room environment on headphones in the way that Focusrite's VRM technology did. Oscillot's NS10 emulation also presents a much leaner low mid-range than I'm used to from my own pair.

For me, then, it's the provision of basic master-section features that is the real selling point of Perspective. Talkback is easy to set up, and Oscillot have properly implemented features like independent left/right muting, which are extremely useful for mix checking, yet rarely found in DAW-world. The interface is slick and immediate, and if you're used to working on a large-format console, you'll feel right at home. Even better would be to have the interface paralled on a linked iPad or mobile phone that could serve as a dedicated monitor controller — something for the future perhaps?