Oto's 8-bit effects box gains a synth and sequencer. Is this the icing on the, er, Biscuit? 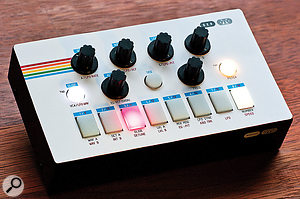 The Biscuit in its new guise as 'Der Oto'.

I recently celebrated the first anniversary of having my ears de-waxed by a Biscuit. This isn't the prelude to some bizarre Hobnob confession, I'm talking about the Oto Machines Biscuit, an 8-bit processor whose rough edges are smoothed by a stereo analogue filter.

After a review, it's common for kit to receive software updates, and ordinarily this wouldn't retrigger the review process. However in the Biscuit's case, the updates aren't to existing functionality. Instead, version 2 adds a significant new ability; that of transforming from a processor into a synth named Der Oto. Existing Biscuit owners should rejoice, because the upgrade is free. For the rest of us, it's installed in all new units, suggesting that this is the perfect time to revisit one of 2011's most enjoyable discoveries.

For a Biscuit refresher, check out the review from January 2011. A few minor changes are caused by this revision and I'll point them out as we get to them.

Der Oto is a two-oscillator monophonic synth of the 'gritty' variety. It has a step sequencer squeezed in, too, pushing the humble 8-bit processor close to its limits. Additionally, as there was insufficient RAM and Flash ROM to contain both personalities separately, the two sets of code had to be carefully merged. Fortunately, the resulting synth showed no signs of psychotic behaviour while in my care, but the manual provides suggestions for lightening the processor load, should this ever be an issue.

To differentiate between the two modes, Oto Machines supply 'Der Mask', a special white-faced rubber overlay with the synth parameter names printed on it. It's reassuringly heavy and durable, but if you prefer to save the 24 euros it costs, the mask is available as an acrobat file to print as you wish. Once the mask is in place, it's a simple matter to access each synth function, using the row of buttons. One press selects white functions, the second is for tweaking those printed in red. Parameter values are adjusted with the Data knob, and when any button is pressed again, the knob resumes its primary role — which is setting the filter envelope amount.

Despite this multi-functionality being grafted on to an existing design, it's really not hard to use, thanks to the overlay. In fact, I'd say it was even more intuitive than the Biscuit itself. Knobs are allocated to the most often-needed parameters, so you can quickly grab the filter cutoff, resonance and envelope amount, plus the envelope's Attack, Decay and Sustain. Unsurprisingly, some knobs do occasionally switch roles. For example, if you press button 7, the three envelope knobs now control the LFO rate and the amounts of filter and pitch modulation. Even this small discomfort can be avoided if you have a programmable MIDI controller — because all synth parameters have corresponding CCs. 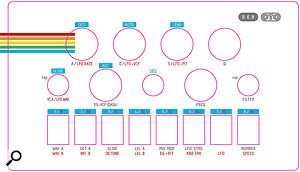 The overlay — aka Der Mask — provided by OTO Machines to transorm the Biscuit into Der OTO.

Consistent with the original Biscuit implementation, the 8-bit processor's output is routed through a stereo multi-mode filter. Typically, oscillator A takes the left filter channel, oscillator B the right. Both oscillators have six waveforms, including sawtooth and square waves in low- and high-quality versions, plus a sine. The lower quality waveforms aren't present only to save processor cycles: their aliasing and glitching wreaks all kinds of interesting havoc — not to mention dirty, dirty bass lines. Throw in a simple but effective FM implementation — and noise too — and Der Oto has all the right ingredients for fat, if frequently nasty, synthesis.

Further sonic delicacies are supplied via the mix/mod section. This is not just a bog-standard blender of oscillator levels, it's a series of operations for injecting extra energy and, inevitably, distortion. The first of these is ring modulation, or, rather amplitude modulation between oscillators. In this mode, oscillator B's level becomes the modulation depth and the resulting signal hits both outputs like a sledgehammer (did I mention that Der Oto's output is hot?). Next is 'X-Or' (or 'Exclusive Or') a logical operation between the 8-bit oscillators. Not easy to describe non-mathematically, X-Or adds buzz and grunge to any patch. This is followed by a bit-crusher — equivalent to the Biscuit mode where bits 2-4-6-8 are on and bits 1-3-5-7 are off — and, finally, 'Swap', which is comparable to the mode where bits 1-4 are swapped with bits 5-8. Swap somehow straddles the range from pseudo-oscillator sync right through to gravelly, chewy distortion, and is yet another reminder of 8-bit's aptitude for aggression.

The analogue filter is next in the audio chain and, as before, is a major contributor to Der Oto's appeal. Its existing low-, band- and high-pass modes are joined by a few synth-specific parameters — envelope amount and basic key tracking — but nothing too elaborate. The same simplicity is found in the LFO, offering three waveforms (triangle, square and sample & hold) to modulate pitch and filter cutoff. The LFO can be sync'ed to note-on events, either at the highest or lowest point of its waveform, and it can run freely or operate in one-shot mode, like a simple envelope.

If anything, the VCA is even more streamlined. It's a strictly gated affair until you press the VCA button instructing Der Oto to shape its output via the envelope. There's nothing more to say, except that the envelope's decay is shared by the release and, for those who are interested, its curve is linear (exponential was just beyond the remaining processing power). Interestingly, although a linear decay means that blippy sequencer patches are more difficult to achieve, it lends more weight and presence to sub-basses. Swings and roundabouts.

Press the central Seq button and all sequencer functions indicated in blue on the overlay spring to life. In order to fit 16 steps onto the eight physical buttons, steps 9-16 are selected by a second press of the key. Having picked a step, you enter its note, octave and length by turning knobs. Individual step accents and glides are yet more pattern-enhancing goodies, ideal for spawning wibbly 303 patterns.

The sequencer automatically syncs to incoming MIDI clock and can run at once, twice or four times the current clock speed. Unlike the rest of Der Oto, there are no MIDI CCs allocated to its parameters, so you can neither control the sequencer remotely nor transmit its output to other gear. Nevertheless, for generating nifty little loops and riffs, you can't go far wrong.

The process of mashing various waveforms in the mixer, then applying the filter, generates an array of strange but alluring analogue/digital tones. Fortunately, your creations can be stored in eight onboard memories or offloaded as a SysEx dump. If you choose the internal memory route, saving synth patches doesn't interfere with any existing Biscuit patches. However, it's important to note that the sequencer is different; its patches will overwrite Biscuit memories 9-16, so it's a good idea to get the backup habit from the outset.

The other limitations caused by the personality merge are not so bad. The Biscuit's Snapshot function has been removed in version 2.3. Snapshots were used for storing favourite 8-bit configurations, but since these are fast enough to set up anyway, they're no great loss. Finally, there was no room for the MIDI filter menu in Der Oto, so if you want to filter out certain types of incoming data, you need to swap back to Biscuit mode, where the filtering for the entire machine is set. Again, this is no biggie.

If you were tempted by a Biscuit previously, this upgrade isn't so much an extra feather in its cap as a brand new cap! That you can't swap between Biscuit and Der Oto modes without a power-off seems a petty quibble when weighed against the value of the synth now in residence. Der Oto isn't just a decent-sounding afterthought, it's an unusual and wicked little imp that snarls through low-fidelity filth and that rather splendid filter. And even if the sequencer doesn't change lives or inspire gushing epiphanies, it's perfectly serviceable for playing simple bass lines while you tweak.

To sum up: in the Biscuit, Oto Machines created a striking and original audio processor. Now that it has so seamlessly absorbed an extra identity, it's an even more attractive proposition. Chomp!

I think the Biscuit is unique. If there's another hardware bit-crusher and analogue filter that leaps into a telephone box to emerge as a quirky synth, I'm not aware of it.

The latest firmware is version 2.3 and, once downloaded, it's a simple matter to upgrade by playing the SysEx file to your Biscuit. As always, I used MIDI-Ox on my PC, but there are clear instructions for doing it with SysEx Librarian on a Mac too. Swapping between Biscuit and Der Oto modes is as easy as powering up while holding down three buttons. The mode is remembered for next time, so you only need to do this when switching functionality.

This brilliant surprise upgrade transforms the Biscuit into a simple synth that growls and spits. The change is painless, too, with no Jekyll & Hyde tragic ending. The only problem might be deciding which personality you like best.