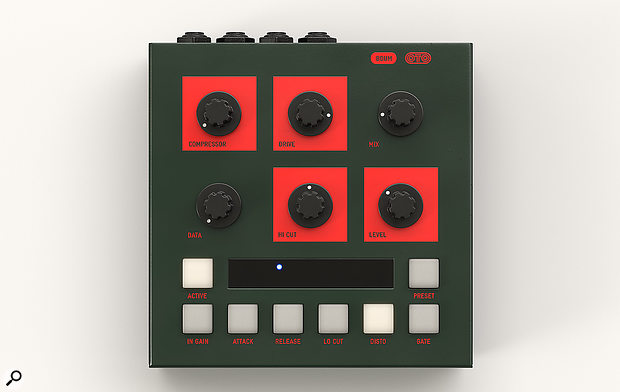 With their usual idiosyncratic approach to audio, OTO Machines have created a processor that will surprise and delight.

The Boum is the latest industrial‑styled desktop effects unit from the French company that brought you the Biscuit. You would be forgiven for detecting similarities between the two products, both being primarily stereo distortion boxes with an analogue filter. But whilst the now‑discontinued Biscuit focussed on lo-fi 8-bit distortion, Boum aims for a more grown-up sound.

The word ‘boum’ translates from French as either ‘bang’ or ‘party’ depending on whether you use the masculine or feminine noun. I point this out not to educate or even catalyse sniggering at the back of the class (though it may), but because it gives a clue to the ethos of the box. The Boum wants to take your audio, challenge it to a game of beer pong, follow it up with some tequila slammers and leave it dancing on the table at 3am.

The Boum completes an unholy trio of ruggedly styled OTO products, the Bam, Bim and Boum. All share the same near military-grade design and control layout. The construction quality is exemplary. Pots feel uniformly smooth with no wobble, buttons feel like they will last a lifetime and the casing feels sturdy enough to survive some serious mishaps. The only niggle is that the red‑on‑green labelling can be hard to read in low light.

The signal flow is simple. A stereo input goes through gain, gate, compressor, low-cut filter, distortion, high-cut filter and out again, in that order. The entire signal remains stereo throughout, making the Boum ideal for bus processing or even the master bus if you feel so inclined. The manual has a very good signal flow diagram which is worth studying.

The main stereo inputs and outputs are located at the rear of the unit on unbalanced quarter-inch Neutrik connectors, accompanied by a mono side‑chain input on a 3.5mm jack, a MIDI input and a 15V DC power socket.

Five of the six pots on the front panel are dedicated to specific tasks. Compressor, Drive, Mix, Hi Cut and Level all do largely what you would expect. The sixth pot is labelled Data and is used in conjunction with the row of six buttons under the LED display. I call it an LED display. It is simply two rows of eight white LEDs. No text or graphics — just two rows of dots. Everything that isn’t on a dedicated control is accessed by pressing a button and using the Data pot to enter a value. When there is no button selected, the LEDs can show a number of things depending on the Display Mode setting. The default is a VU meter with the top row showing input level and the bottom row showing gain reduction, but you can also choose to show preset bank/number or switch them off entirely.

The six buttons along the bottom allow the Data pot to control input gain (In Gain), compressor attack (Attack), compressor release (Release), low‑cut filter frequency (Lo Cut), distortion type (Disto) and gate threshold (Gate), from left to right. The controls appear in order of signal flow, except, curiously, for the gate threshold which ought to be placed after the input gain and before the compressor controls, not at the end.

On the Boum’s back panel we find quarter-inch sockets for audio I/O, a 3.5mm side‑chain input, a MIDI in port and a socket for the external 15V power supply.Two additional buttons flank the LED display. Active turns the effects on and off and Preset allows you select one of 36 presets, which are arranged in six banks of six presets. Press one of the bottom-row buttons once to select a bank, and again to select the preset within. Saving a preset is almost the same routine. Press the Preset button for two seconds until it flashes and then repeat to select a bank and preset to overwrite.

Boum’s compressor is perhaps unfairly described in the manual as a ‘one‑knob compressor’, but that’s not strictly true, for reasons I’ll come to in a moment. The Compressor control adjusts threshold, ratio and makeup gain simultaneously. Attack and release controls are available separately via a button and Data pot combo. The attack range is 50 microseconds to 33 milliseconds and the release range is 50 milliseconds to 1 second.

As you turn the Compressor control clockwise the ratios vary from 1:1 (no compression) at the leftmost position to ∞:1 (limiting) at the centre position. After this centre position the compressor goes into what the manual calls ‘over compression’. With the Compressor pot turned fully clockwise, the compressor’s ratio is 1:-1. This causes a kind of dynamic inversion where anything above the threshold is actually reduced in volume so it lands under the threshold. Eventide pioneered this technique in 1972 in their Omnipressor and named it ‘dynamic reversal’. It results in a pumping/ducking effect.

If the concept of a ‘one‑knob compressor’ concerns you, consider that you can control the gain of the input signal via the In Gain control, which gives you effective control over threshold. And you have control over the gain of the signal post compressor with the Drive pot, which gives you effective control over make‑up gain. So you get far more control than the ‘one‑knob compressor’ moniker might lead you to believe. The implementation is clever and gives you practically all the flexibility you might want from a compressor with very few physical controls. It does take some time to understand and master, but once you do, its elegance is rather striking.

Not content with kneading your audio dough through the compressor, Boum offers no fewer than four analogue distortion circuits with which to bake your sonic pastry. These are selected by hitting the Disto button and using the Data pot to choose one. They are named Boost, Tube, Fuzz and Square, and rather than give you the dry technical circuit description from the manual, I’ll simply describe them as gentle, tube-y, fuzzy and violent (insert Snow White pun). With a maximum 55dB boost available you can achieve everything from barely perceptible harmonic enhancement to all-out square‑wave destruction.

There are two filters on board to help you achieve just the right amount of toasty warmth. A 6dB/oct, low-cut filter sits in front of the distortion to cut low frequencies from the input signal. This is accessible via the Lo Cut button. You can select values of flat/off, 75Hz, 150Hz or 300Hz — perfect for drum bus distortion where the kick drum can often become unruly.

The Hi Cut control gives you a 12dB/octave, high-cut filter with a full range of 20Hz to 20kHz. Positioned after the distortion circuit, this is particularly helpful in calming the more pugnacious Fuzz and Square distortion modes, which can create a lot of harmonics in the higher frequencies. But the filter’s wide range also makes it ideal for grand filter sweeps beloved of dance floors everywhere.

I Want You In My Room

The final piece of Boum’s sonic bakery is the side‑chain processor, which provides both side‑chaining and gating functions. With nothing plugged into the side‑chain input, the main input signal goes into the side‑chain processor. Gating is achieved by pressing the Gate button and selecting a threshold value with the Data pot. The threshold value can be either off (no gating) or a value between -50dB and 0dB, in 10dB increments. Sadly, there are no controls for attack or release on the gate. The fixed values give a ‘chopping’ effect — anything subtler isn’t possible.

There are a number of hidden preferences. These are mostly set-and-forget items and so you can forgive the lack of any indication on the front panel on how to reach them. They usually involve a lingering button press or a button combo and will reveal Display Mode, Memory Protect (to disallow preset saving) and something called Local Mode.

Local Mode allows you to enable or disable the loading of the Mix (dry/wet) value from presets. When Local Mode is enabled the value of the Mix pot in each preset will be ignored and instead the Mix value will always come from the current pot position.

MIDI can used in a number of ways. Program Changes can be used to select presets and there is a Program Change map, should you wish to map specific numbers to presets. You can also automate the majority of Boum’s most important parameters via Control Changes. But perhaps the most interesting MIDI option is the ability to automate the compressor side‑chain. This can be done in one of two ways: either with a Control Change or with MIDI Note velocity. When controlling the compressor via MIDI, the Compressor pot sets the amount of MIDI controlled compression.

As one gets to know Boum, the cleverness of its design begins to dawn like the warming first rays of sun at an all-night festival. The key is understanding each element of the design and exploring its possibilities in isolation. The compressor, for example, may seem heavy handed at first, but the educated manual reader will discover that all normal compression ratios are contained within the first half of the pot range. After that it goes into limiting and beyond into dynamic reversal. The distortion section requires similar accustomisation. Its range is enormous and it can handle both subtle warming and balls-to-the-wall shredding with equal aplomb.

Once you start using this knowledge to combine the elements together, Boum becomes more than the sum of its parts. Dialling in the correct amount of compression, side‑chaining, distortion and filtering for a particular job is a subtle art, but once mastered the resulting sound is nothing less than top notch.

I found a nice home for Boum on a pair of my mixer’s group inserts, with a spare auxiliary send connected to the side‑chain input. In this position it was able to handle single instruments, whole groups and even whole mixes without re-patching. Sending a kick channel to the side‑chain input results in a very satisfying and classy side‑chain compression sound which would be at home with modern electronic music production techniques.

OTO have to be commended on a job well done here. The design, both physical and internal, is beautiful. It can be a chameleon in the studio or one of those boxes that you leave on a single setting because it does that thing so well. Either way you’ll enjoy its grown-up sound and classy ergonomics. Bravo Boum.

Boum is a stereo Swiss army knife of analogue compression, distortion, filtering and side-chaining. Clever design means it can turn its hand to many roles. All this plus good looks could make the competition jealous.