Performance Samples Solos Of The Sea – Solo Violin A

Performance Samples are a production company whose products have grown out of virtual instruments created for private session use. The result of this approach often leads to clear, raw and highly present software instruments with refreshingly minimalist interfaces. In this vein, the evocatively named Solos Of The Sea – Solo Violin A contains the simplest of instruments: an effective legato violin patch, offering only a single toggled option. The company’s tagline “not for purists”actually seems a little out of place in this case, given the beautiful simplicity and pure tone of the instrument in question. 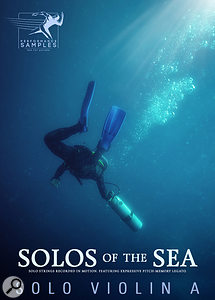 The GUI in Kontakt (full version 5.5.1 or higher is required) presents only the option to switch between classic legato and polyphonic settings. It’s a refreshing approach, given the sometimes overwrought complexity of many orchestral virtual instruments.

The sound itself is clean and bright, playing neatly in both slower and faster legato passages. The instrument sounds close-miked, though enough pleasant room sound remains that it cannot be called a dry recording. Dynamics are controlled using the mod wheel, and credit should be given for a very smooth and realistic-sounding range without awkward or unmusical surges via mod-wheel or MIDI control. Unlike many legato string libraries, this simple instrument concentrates on bowed legato, with the frequent on-note re-bowing leading to a punchier sound than composers may be used to; it is curious to see how this may be addressed and complemented in the forthcoming Solos Of The Sea instruments. The instrument stands out for its realistic sustain, with the company’s ‘active bow technology’ accounting for realistic re-bowing in held notes. The instrument’s listed ‘library limitations’ — including the admission that notes can be dropped or ‘ghosted’ in excessively passages — are not things I encountered in my play testing.

There is room for criticism in this otherwise clean and simple instrument. The low G sounds too gritty and awkwardly engages its re-bow too quickly, something not present on the other open strings (D, A and E). There are no musical options related to velocity (such as portamento) available. Furthermore, when tested side-by-side with the company’s free Solo Violin Legato, little substantive difference could be inferred outside of the darker timbre and superior low G of the free instrument. (While we are mentioning the freebies, composers should definitely take a look at some of the generous free libraries being offered by Performance Samples, especially the useful legacy instruments).

A final positive area to notice is the instrument’s rich tone and realism and its low system load, requiring a fraction of the active memory of other major legato string instruments. This makes it an attractive additional instrument to sweeten sections or to plug in to simpler projects in a notation software setting. That being said, at $139 the library is pricey, especially compared to instruments such as the strikingly musical Tina Guo Legato Cello ($99) and the fully functional and equally musical Joshua Bell Violin ($199).