If action and thriller soundtracks are your thing, then Red Room Audio’s Saga Acoustic Trailer Percussion might well appeal. The sampled instruments span conventional orchestral drums/percussion, various ‘world’ drums and percussion plus a range of cymbals, gongs, oil drums, anvils and various metal objects. The library requires the full version of Kontakt and is built around a 4.3GB sample library with a stylish front end. 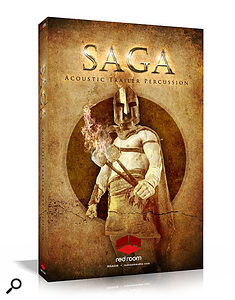 The samples are organised into 10 Kontakt presets. The first two provide ‘ensemble’ patches for the orchestral and world instruments, with different sounds and articulations mapped in a very sensible, performance-friendly fashion across the MIDI keyboard. Articulations vary for each sound but include main hits, rimshots, rolls and, for the cymbal and gong sounds, chokes and scrapes amongst a few others. There are some nice performance touches here. For example, the option to use the mod wheel to control the dynamics of the roll articulations works well and, within the Global section of the UI, activating the Roll To Hit button will automatically add a final hit as you release the key.

Trailers for action/thriller movies do tend to hit big in the drum/percussion department and, thankfully, Saga’s sonics seem to be well up to the task. That said, if you want to get subtle, there’s enough detail in the velocity-based sampling to let you do that also. All the sounds are very effective, and while the orchestral and world ensembles might be the presets most reached for when sketching out ideas, there are some interesting options elsewhere. For example, the separate cymbals preset sounds great, while the more leftfield anvil and metal sheet presets have options that could spook anyone if auditioned in a darkened room; scary stuff!

The UI is fairly simple, but its four panels provide plenty of sound-shaping options. Editing within the Instrument panel can be done at the patch level or for individual instruments within the patch and you have control over EQ, stereo width and tuning as well as the option to adjust the blend between a close mic and a more distant room mic. The FX section provides you with four slots into which you can place any of the 12 included effects. These all offer a modest selection of controls. The Global section, as well as the Roll To Hit button, allows you to adjust the velocity response, while the x2 button plays two of the round-robin samples for each hit for an even bigger sound.