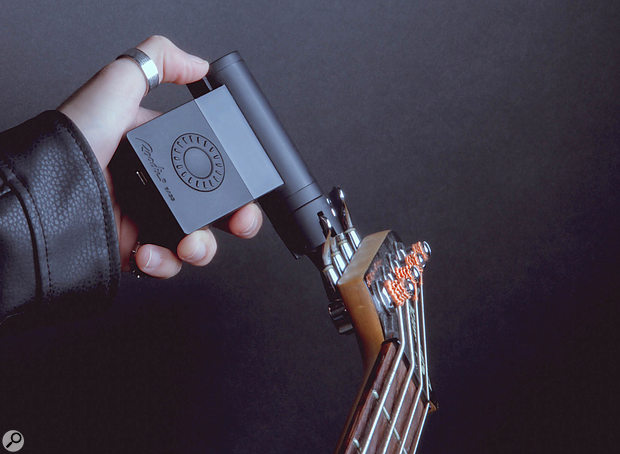 This handy gadget aims to take all the hard work out of tuning your stringed instruments.

In the 1990s, Canada’s Kraus Musical Innovations developed the String Master: a handheld combination of electronic tuner and electric motor designed to automatically and accurately tune a guitar to the standard EADGBE. Although it worked well, and pioneered the ‘pistol-grip’ paradigm for future handheld automatic tuners, the String Master disappeared without trace.

In 2013, a successful Kickstarter campaign enabled Beirut-based startup Band Industries to launch the Roadie, an automated guitar, ukulele, banjo and mandolin tuner. More high‑tech than the String Master, the Roadie relied upon a Bluetooth‑connected iPhone app to detect string pitch and carry out the necessary computations. The unit itself simply turned the instruments’ machine heads. A second successful campaign launched the Roadie 2 towards the end of 2017, and the Roadie Bass in early 2018, neither of which requires an iPhone to operate.

Although I’ve never seen an original Roadie, I did take a look at the Roadie 2. Like the Roadie Bass, the Roadie 2 detects the pitch of a string through the button of the geared machine head that it is in contact with. Although the Roadie 2 could tune effectively in many circumstances, its motor and clutch mechanism just didn’t seem to have the power and strength to cope with either lower machine‑head ratios or heavier string gauges.

The Roadie Bass is a very different beast to the Roadie 2, being built around a much more powerful motor that enables it to automatically tune bass guitars. In addition, its wide pitch‑detection range (27.5Hz-880Hz) allows it to tune the same range of instruments as the Roadie 2.

Physically, the Roadie Bass looks like a Roadie 2 on steroids. Although it features the same black aesthetic and outline as its sibling, the monochromatic display screen now resides on the rectangular grip, just above a rotary, push-to-select controller, rather than being mounted on the motor housing as on the Roadie 2. A white LED panel, sitting on the side of the grip, flashes (accompanied by a beep) to indicate that a string has been tuned. An LED strip on the end of the barrel turns blue when the Roadie is switched on or tuning, green when a string is in tune, and red should an error occur. Power to the unit comes courtesy of a USB-rechargeable lithium-ion battery.

The Roadie Bass’ machine‑head chuck is presumably designed to be able to grasp the entire available range of button shapes and sizes but, unfortunately, it actually fitted very few of those on my instruments firmly. In my case, only Gotoh 510, Collings wooden-buttoned tuners and 5-Star geared banjo pegs were held securely. Every other tuner brand — Kluson, Grover, Schaller and Waverley, to name but four — had some degree of play between the button and the Roadie Bass’ chuck.

The free Bluetooth Roadie app (available for newer iOS and Android mobiles and tablets) enables you to create both instruments and tunings, and to sync these with the Roadie(s) in your possession. However, you first have to endure a home screen that has little to do with the tuning process, but is more focussed on offering you $10 shop credit if you successfully refer a friend. Fortunately, you can bypass all the non-essential items by heading straight to the app’s navigation bar at the bottom of the screen. 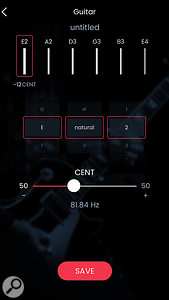 The accompanying app allows you to set up multiple tunings for each of your instruments, and then transfer them to the Roadie device itself.The Instrument screen allows you to create a list of all your Roadie-tunable instruments by type, number of strings and brand, and to name and upload a photograph of the instrument in question. From there, you move to the Tunings screen, where you can create multiple customised tunings for six‑, seven‑ and 12‑string guitars; standard, concert, tenor and baritone ukuleles; four‑, five‑ and six‑string banjos and basses; and mandolins. When creating your own custom tuning, you can change each note’s octave, make it sharp or flat, and/or detune it by ±50 cents, which is useful if you’re into stretch tunings.

Once you’ve created your instruments and customised your tunings, you then can return to the Instrument screen to assign a default tuning and a pitch reference (A=420-460 Hz) to each individual instrument. Creating custom tunings is the only function that requires using the app, so if you don’t need to do that, you don’t need the app.

The Settings screen allows you to link the app over Bluetooth to one or more Roadies, and to check not only their connection status but also their serial numbers and firmware versions. Here you can also access the Help Desk; refer a friend (again!); switch to the Roadie 1 app (should you happen to own a first-generation unit); check the app version number; erase all your tuning data; or log out of the app. Finally, touching the navigation bar’s central Sync icon synchronises your Roadie with the app, during which process all app and Roadie instruments and tunings are copied across in both directions, leaving you free to quit the app and to start tuning your instruments.

The Roadie Bass displays its Instrument screen at power on, and if it’s the first time you’ve used your Roadie Bass, you’ll want to scroll all the way to the end of the list of instruments to the Settings menu. Here you can run test routines, and choose whether the front LED turns on during tuning or just flashes when the string is in tune. You can also set the Roadie to always tune up to pitch, and I found that although tuning was slightly slower in this mode, the end result was always more stable.

On the Instrument screen itself, you can either scroll to a particular instrument and select it, or add, name and select a new instrument. You can then start tuning immediately, or change the tuning and/or add a capo at frets 1 through 12 before starting to tune. Tuning always starts with the lowest string, but you can scroll to any other string to begin. Providing that your Roadie can identify the pitches of your instrument’s strings, tuning is simply a process of placing the chuck over the chosen string and plucking it, at which point the Roadie will bring the string into pitch, and then beep as the respective LEDs flash white and turn green. Once a string has been tuned, the string selection automatically moves up one string.

Although the Roadie Bass usually tuned electric and acoustic guitars and basses efficiently, it occasionally either refused to tune a string, or arbitrarily decided to drop its pitch prior to tuning — and then kept on going down, eventually insisting that it was on the wrong string. These errors generally occurred only on certain strings of certain instruments (including banjos and mandolins), and were normally accompanied by a poor fit between chuck and machine head.

With strings in good condition (you can use the Roadie Bass’ unwind/wind mode to ease the pain when change is necessary), the overall tuning accuracy was always within the couple of cents that I’d expect to be able to tune to quickly with a decent clip-on tuner, even if not always absolutely spot-on on every string of every instrument. However, the Roadie Bass took much longer than I do to get a string into tune. Having thought about this a lot, I’ve realised that when I use an electronic tuner, I use the tuner display to judge whether or not a string is more or less tuned to pitch, rather than listening to the actual note. Working this way speeds up the tuning process, but if I’m seeking absolute accuracy, I take just as long as the Roadie Bass, if not longer.

If you’re regularly changing a lot of strings, you’ll find the Roadie Bass’s unwind/wind facility and automatic tuning to pitch — even with weird and wonderful tunings — extremely useful. At the end of the day, your personal situation will determine the usefulness (or otherwise) of a Roadie Bass to you, and it is certainly well worth checking one out if you think that what it offers could work for you.

Although I don’t know of any directly comparable tuners, guitarists might want to take a look at the lower-cost RockJam WeTune Pro handheld automatic guitar tuner.

A technologically impressive combination of hardware and iOS/Android app, the Roadie Bass promises to automate the process of tuning guitar, mandolin and banjo family instruments with geared machine heads.