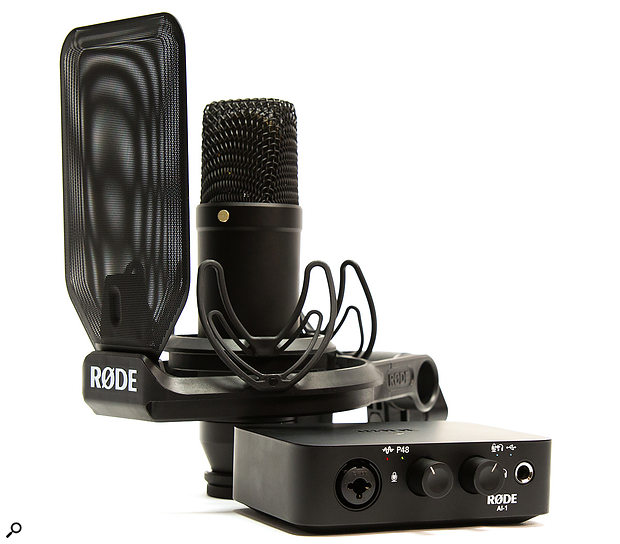 Rode's Complete Studio Kit bundle combines the one-in, two-out AI‑1 USB audio interface with their popular NT1 capacitor microphone and accessories. Both of these items are available as separate products, too, and we looked at the NT1 when it was first released. We were impressed by both its build quality and performance, not least its extremely low noise. In this package, the mic once again comes with a very sophisticated 'dual lyre suspension' shockmount and a bespoke double-layer pop screen that fits to the shockmount, ensuring correct spacing from the microphone. You also get a USB cable and a Rode-branded XLR mic cable — something you normally have to buy as an extra. A soft mic bag is also included, and everything comes packed in a very substantial cardboard box with a moulded plastic insert to store all the items.

It is worth reiterating the basic spec of the mic for those as yet unfamiliar with it. Its one-inch capacitor capsule has a fixed cardioid response and feeds a transformerless J‑FET preamp covering the 20Hz to 20kHz frequency range, with a voicing informed by classic European studio mics. It requires 48V phantom power for operation, and its noise figure is an astonishingly low 4dBA. Its price puts it in the entry-level range but there's nothing entry‑level about its performance. For more information, read the full review in the SOS August 2014 issue.

To meet the needs of both the beginner and the more experienced user who needs a portable interface, the AI‑1 has a compact (88 x 124 x 38mm) desktop form factor and can accept microphone or instrument‑level inputs via its XLR/jack Neutrik Combo input connector. Its metal casing is reassuringly weighty and there's a non-slip base to stop it sliding off the desk.

Things are pretty simple on the back panel, with just a USB port for computer connectivity and power, and a pair of quarter-inch audio outputs.The preamp uses discrete Class-A circuity, and because the AI‑1 is a class-compliant device, it needs no drivers for operation with Mac OS or iOS. Mac OS 10.10 or later is required, while Windows is suppoerted from version 7 onwards. Switchable phantom power, with status LED, is activated by pressing the gain control, and all the power for the interface comes from the host USB port, so this needs to be a direct connection rather than via a passive hub. Bus powering makes the AI‑1 a good option for working on trains, planes or in hotels.

A discrete and sensibly powerful headphone amplifier feeds a quarter-inch TRS jack on the front panel, and the rear-panel balanced-jack main outputs are muted when headphones are plugged in. A playback volume knob adjusts the phones or speaker output level according to which is in use. Sample rates of up to 96kHz are supported. A USB-C port is located on the rear of the unit, and a one‑metre USB cable is included. An LED on the AI‑1 confirms that is receiving USB power, with another alongside to indicate direct monitoring.

Direct monitoring enables the input signal to be monitored 'at source' to avoid monitoring latency when recording. However, straightforward 'through the DAW' monitoring of the input signal is also available; press the output level control to change between the two modes. As usual, you just have to remember to mute or turn down the level of the DAW track your are recording to when using direct monitoring, to avoid the delayed signal coming back as an unwelcome echo.

Basic 'traffic‑light' metering is provided via a single multi-colour LED: the aim is to get the LED flashing yellow for optimum input level. If you don't get out of the green, the level is too low, and if you hit red you're likely to get into clipping. If the input level is below -60dBFS, the meter LED is extinguished.

The spec sheet tells us that the Equivalent Input Noise with maximum gain is -128dB (A-weighted) for a typical mic impedance of 150Ω, and that the frequency response is flat within 1dB either way from 20Hz to 20kHz. This is pretty much what you'd expect from a good-quality mixer or stand-alone preamp. Available gain is up to 45dB, which is a bit less than you might expect from a general-purpose preamp or mixer designed to work with all types of microphones, but still more than enough for most close-miking or instrument recording needs with the supplied NT1.

The whole look and feel of this kit exudes quality, and there's no disappointment when you switch it on. The interface is extremely quiet and transparent-sounding, the headphone output is more than powerful enough for any sensible listening duties, and using the combination of the AI‑1 with the NT1 reveals more than enough gain, even for quieter sound sources. There's absolutely nothing I didn't like, and working on this review reminded me just what a solid performer the NT1 microphone is.

With only a single input, the AI‑1 interface isn't the right choice if you need to record in stereo, or capture voice and guitar to two different DAW tracks at the same time. However, for the solo musician or podcast producer recording one part at a time, the Rode Complete Studio Kit ticks all the boxes and has all the right credentials for bus-powered, mobile recording. And then there's the price — the kit is exceptional value whichever way you look at it, especially when you consider the cost of third‑party shockmounts and pop screens of this calibre. Whether you're just starting out, setting up a studio for your kids or if you're an experienced studio owner looking for a mobile rig, the Rode Studio Kit won't disappoint.

A beautifully engineered package at a bargain price.