My overriding memory of the original Xosphere, which I looked at exactly four years ago, is of it being a complex product with a densely packed interface. Based around four processors called Oscillators, it allowed the user to select eight different sound sources (two within each Oscillator section) and modulate them using a wide range of tools, including what seemed like an endless number of step sequencers which Sample Logic call Animators. These tools, coupled with a large library of ethereal and atmospheric sounds, made it an excellent instrument for creating soundscapes. 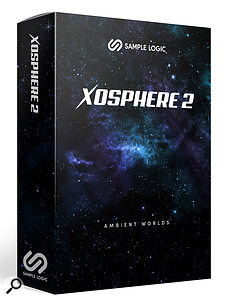 Xosphere 2 is also based around four sound processors, but this time they’re called Cores rather than Oscillators, and are complemented by an X/Y pad that allows the user to fluidly modulate between them in real time.

The interface has also improved; it now looks relatively spacious, and that’s not just because the background is a graphic of the solar system. SL have achieved clarity by omitting a few of version 1’s editable parameters and features, and moving the rest to separate pages, so that the main page (now called Core) is dedicated to sound selection and performance-related activities. Here, for example, it is possible to set key ranges and sample transposition amounts for each of the four Cores, and to record cursor movements performed with the X/Y pad. Perhaps the biggest change, though, is that just one sample runs in each Core instead of two.

Next along is a page called Effects, which is where the designers have put the step sequencers (Animators) that were seen in the original Xosphere interface. The Effects page also provides six effect slots that can be filled with selections from a 24-processor menu, and each chosen effect can be modulated using an Animator. Importantly, all of the Effects page options are available for each Core, so when the four are combined, the results become quite complex.

As if that wasn’t enough, a separate chain of effects can be applied to the combined output of the four Cores, but this is set up from the Master page, where there is another six-slot chain and menu of 20 processors.

The fourth and final page, called Mix, is perhaps the most complex of all. It provides each core with a well-equipped filter section, plus three independent LFOs per Core, which can be applied to the section’s Volume, Lo Cut and Hi Cut parameters.

In addition to all this, it is possible to search the soundbank using keyword filters, and randomise either whole presets or specific parameters.

Fans of the original Xosphere may be disappointed to find one or two of its features missing from version 2, but I expect that new users will be happy with the product’s improved playability and ease of use, as well as its fresh bank of sounds. Once again, the samples and presets are perfect for atmospheric modern sound design, as long as it is not something really analogue or acoustic that’s required.

Mastering Essentials Part 3 - How loud should I master?
6 hours 38 min ago.