Built in Manchester in the UK, Stone Deaf’s pedals always seem to add an interesting twist or two to existing ideas — and their Tremotron is no exception. The company seem to take component quality very seriously too, using ARM chips, WIMA capacitors, audio-grade potentiometers and Burr Brown op-amps in their designs. The folded‑steel case is also built like a tank, which is presumably why Stone Deaf are confident enough to offer a five-year warranty as standard. And there’s no shortage of visual feedback either, with LED indicator rings around the three main controls. There’s no battery-power option — due not to a design oversight, but to the high current demands of digital pedals — so you’ll need a 9V PSU that’s capable of delivering 250mA or more. 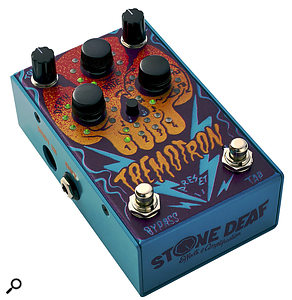 If you were wondering, then yes, the Tremotron can do the basic job of emulating an amplifier’s tremolo effect. But it also has the unusual ability to run two tremolos at a time to create more rhythmic modulations, courtesy of its digitally controlled analogue circuitry. Both tremolos can have different modulation shapes, depths and rates. There’s also the option to use an expression pedal, via a separate jack socket, for control over depth, rate and shape, and there’s a MIDI in port for remote adjustment of parameters, changing presets and tempo sync. Using MIDI, up to 128 patches can be stored and four presets are included to get you started. You can access the four presets by pressing both footswitches together. You can also save your own settings over these via the panel controls.

Pressing and holding the bypass footswitch for five seconds when the pedal is bypassed gets you into MIDI mode, in which you can change the MIDI channel and switch on MIDI Clock sync — all of which is done using the existing knobs, albeit in arcane ways. Pressing bypass again stores the current settings.

While amplifier tremolos tend to use a sine wave (or something very close) for their LFO, the Tremotron has a rotary control that allows you to shift between a total of nine sine, pulse, ramp and reverse-ramp wave options, alongside the more usual controls for rate and depth. There’s also an overall tone control and a level control. The pedal’s tap-tempo footswitch is accompanied by a tap division button and a bypass, and the ability to have each of the two tremolos running at different speeds opens up the possibility of creating syncopated rhythms. It’s possible to control one tremolo via the expression input while the other is fixed, or to control both at the same time, allowing for some dynamic mid-performance changes.

Secondary adjustments and expression jack functions are accessed using the press-switches built into the three main control knobs. These also allow you to make adjustments for the second LFO and to add further modulation options that ride on top of the existing tremolo, adding movement or a ring-modulator-like warble. The LEDs change to a green ring with a red marker LED to indicate that you’re in the secondary editing mode, and to escape this mode you set the secondary control to zero.

This is certainly an intriguing pedal, but whether you need one or not depends on your approach to live guitar playing. The multi-function controls take some getting used to, so you’ll want to keep the manual close at hand for a while at least. While a MIDI controller and an expression pedal will help you get the most out of this pedal, there’s loads you can do just from the panel controls. In the studio, you could probably recreate similar effects using a combination of plug-ins and parameter automation, and if your live needs extend only to a Fender amp-type tremolo, there are much simpler options. But if polyrhythmic tremolo, rhythmic chopping and the ability to switch between presets using MIDI (all with tap‑tempo control) appeals, this is well worth a closer look. If you want some points of comparison for your shortlist, also check out the Electro‑Harmonix Pulsar and Super Pulsar, which add a slightly different set of new wrinkles to the traditional tremolo pedal.