Phasers come and go in popularity, but for some songs you've just got to have one — chorus or tremolo just won't do. Unless you use a phaser extensively, having a compact and affordable option is appealing both financially and in terms of pedalboard real estate — but some of the very cheap Far Eastern offerings I've tried that tick those boxes have turned out to be unacceptably noisy. Not so Tone City's Summer Orange phaser, though. This is a mini‑format (9V PSU-only, no battery option) pedal that bases its sound on one of the better‑known classic phaser pedals of yesteryear. 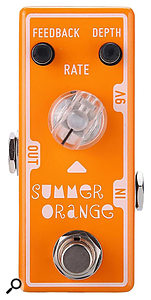 With a true‑bypass footswitch and a blue on LED that illuminates the entire translucent rate knob, the pedal has mini controls for feedback and modulation depth. Its circuitry is built around a four-stage analogue phase-shifter that, at lower feedback levels, delivers the kind of chewy swirl that we all know and love. While most modulation pedals are happiest placed after an overdrive, phasers add a certain magic if placed before, and that's a scenario in which this pedal works extremely well, delivering a sense of subtle movement and timbral complexity. Turn the depth to near zero and you can twiddle the other two controls to get some interesting, near-static tonal changes too.

As the feedback level is increased, the filter takes on a more resonant character that's not unlike a watered-down wah‑wah effect. I've never been keen on the 'squee-ish' sound a phaser makes with the feedback set high, but dial in just a little to focus the effect and it can work really well. The large rate knob has a very wide range and goes from slower than you're ever likely to need to faster than you're ever likely to need, with most of the good stuff near the centre of it is range.

So does the Summer Orange Phaser nail the sound of a classic phaser? Set the two small controls to their nine o'clock positions and the rate near the centre to find out. In reality, all the so-called classics sounded a little different from each other, so who can really say? But the Summer Orange certainly does the job in a more than accomplished fashion than many alternatives, and with negligible background noise; it gets very close to the sounds you hear on many records from the '70s, with perhaps a leaning towards the old MXR Phase 90 character. Given its performance, its bargain price and its two-year warranty, there's a lot to like — which is why the review unit will be finding its way on to my pedalboard for this week's Friday-night gig!