Most of the previous EZdrummer expansion kits are based on meticulously recorded acoustic kits, notable exceptions being the more processed and/or synthetic Dream Pop and Twisted Kit packs. Action EZX leans in the latter direction, blending processed and synthetic sounds with orchestral percussion and vintage drum machines to create the kinds of percussion sounds you might hear as part of an action movie soundtrack. Think huge timpani, Miami Vice-style gated drums, treated orchestral snares, toms, tam-tams and cymbals, Latin percussion, risers, snaps and so on. 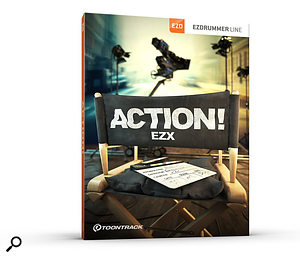 There’s a total of over 450 separate percussive sounds, and these come arranged as 21 kits, though you can change out or retune any kit part and resave your edits as your own custom kits. In common with earlier EZX packs, there’s a mixer section that lets you rebalance the various mics, adjust the included reverb and so on to further customise the sounds. Below the mixer are further controls for Delay, Big Reverb, EQ Envelope and Pitch.

As with other EZX packs, there’s a set of MIDI grooves created specifically for the genre. You also get the three standard percussion add-ons for tambourine, shakers and claps. Drum parts can be assembled directly in your DAW or in the arrangement section at the bottom of the mixer window, which supports the drag-and-drop placement of MIDI files.

The GUI shows eight drum pads and four cymbals (including hi-hats) set up around a desk, with a kick pad beneath the desk and a couple of six-pad percussion surfaces perched at either end along with a smaller trigger pad, which I first mistook for a computer mouse. As usual the tab on each drum pad accesses a drop-down menu of alternative sounds — and there are quite a lot from which to choose.

Now you might be thinking that as you don’t actually work on action movies, these sounds aren’t really for you. Fair point, but having tried Action for myself, I think it safe to say that most of its sounds also fit in well with EDM, ambient and the more exotic side of pop production. Latin percussion is always useful, as are the cajon and timbale sounds. The wide range of electronic kicks work well to replace or augment existing kicks, and I loved the orchestral percussion effects created by bowing and scraping things.

As expected, the quality of the sounds is impeccable and you can create some pretty huge-sounding hits from what’s on offer. I love the timpani. But it’s not all about loud action, as many of the sounds lend themselves to compositions that are atmospheric, spooky, or just good old-fashioned musical, so there’s a lot more scope than you might first imagine. I can see this particular kit getting a lot of use on my future ‘music to soak lentils by’ compositions.