Can Overloud's amp simulator tempt us to plug into our Macs instead of our Marshalls? 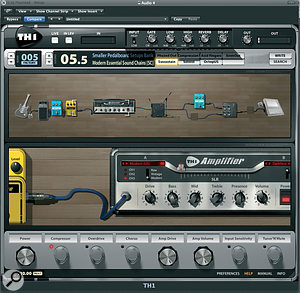 Overloud demonstrated that their plug‑ins deserve to be taken seriously when they launched Breverb, a high‑quality reverb package that was light on CPU overhead, and with TH1 they've taken the same approach to guitar amp and effects modelling. Based on what Overloud call fourth‑generation analogue emulation technology, TH1 follows an similar visual paradigm to competing amp‑modelling packages: you assemble your custom combination of amps, effects pedals, speaker cabinets and microphones on a nicely rendered piece of wooden stage, and you can open the detailed front panel of any selected piece of gear in the panel below to make adjustments. TH1 also allows you to  do things you wouldn't do in the hardware world, such as put two power amps in series!

TH1's additional MIDI functionality and Smart Controls make the GUI that bit different from the competition, but more of that later. There's also a neat option that allows the user to choose two amp models and then morph between them, not unlike the concept behind the Digitech Genesis 3 hardware guitar modelling device released some years back, and if you wish, you can split the signal via two morphing amps, each with its own chain of effects. The cabinet modelling includes Overloud's own ReSPiRe technology, which aims to produce the sense of punch and moving air you get in front of a real speaker, though this can be switched out if not needed, and of course you get an accurate guitar tuner.

While we're talking numbers and specifications, TH1 comes with eight amplifier models providing a total of 15 amplifier channels, and these can feed any of 21 cabinet models, miked with a choice of 18 microphones. The position and distance of one or two mics per cabinet can be adjusted seamlessly in three dimensions. An optional studio/room ambience can be added that varies correctly depending on the mic distance. There's a choice of 'studio' reverbs based on the Breverb technology, and there are 50 pedal and rack effects to choose from. Where relevant, effect rates or delay times can be sync'ed to the host DAW's tempo, though there's also a tap tempo mode.

The TH1 interface is split into six horizontal panels: Header, Sound, Overview, Module, Smart and Footer. There's also a condensed Live view that reduces what's displayed on screen to make it more manageable, and disables prompts to save changes whenever you adjust something. Header is where you find input and output levels, along with the Tuner and a mute button, plus a 'lid' that opens to reveal global controls for the noise gate threshold, plus high and low EQ, reverb and delay.

The Sound panel is basically a preset browser: TH1 has 999 fixed Factory banks plus 999 further User banks. Each bank holds 13 sounds, and each sound can have up to eight variations, so most users will probably never get around to exploring all of them! New settings can be written from here and there's also a search function for finding the type of sounds you're interested in. A Listen facility allows you to hear the patches you're auditioning in the browser as you click on them, or before you overwrite them, which is a nice idea.

The Overview provides a pictorial view of the entire TH1 audio chain, while the Module view shows a detailed control panel for a selected device within the chain, and the Smart Panel provides eight assignable controls. Each of these can adjust one or more user‑programmable parameters, making it easy to bring the key controls for any rig down to a manageable number of knobs and buttons. Finally, the Footer panel is where you access tempo and sync options, preferences, help files and a full version of the manual. 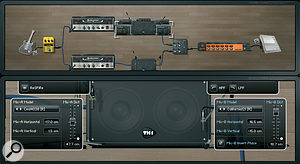 The TH1 signal path can be split for dual‑amplifier setups, as above. The Module panel is focused on the upper of the two cabinets, which is being virtually miked with two ribbons.

The TH1 signal path is pre‑configured as a 'Y' arrangement, so you can insert a single amp before the divide or two after it splits. The same is true of effects and cabinets. At the end of the chain is a simple mixer to recombine the two arms of the 'Y', each having its own volume and pan controls, and there's also a fader to balance the two paths.

As with all such software, a guitar with passive electronics needs to be connected via an audio interface with a high input impedance, or an active DI box fed into a line input. After this you'll need to set the input sensitivity via the physical gain knob on your audio interface, but there's a meter separated into three 'Goldilocks'‑style segments (too small, too big and just right!) to help you. Once you've done this, it's a good first step to start exploring the vast library of presets: the up and down arrows let you navigate banks and sounds while you switch between the eight variations using the buttons. To display the control panel for an individual module, you just click on it. Right‑clicking displays a menu showing the alternative modules available at any position, and these can be dropped into the signal path pretty much wherever you like, as long as one module follows another in series fashion.

When you display the cabinet model, a double‑click on the cabinet opens additional windows for adjusting the mic distance (you can drag the mics vertically and horizontally), selecting the mic type and choosing from various ambience types, as well as the ReSPiRe function to add a realistic low‑end punch. Cabinet types can be linked to the amps, or you can choose freely from the list of available cabinet types. Note that not all of the cabinet parameter boxes may be visible at the same time, due to restrictions in the window size, so you can move the whole display around inside the window by clicking and dragging on the wooden floor.

Smart Controls add local, DAW host or remote control over the currently selected variation and may also be accessed remotely via MIDI using Continuous Controllers 20 to 27, which is invaluable for those with MIDI floor controllers who are brave enough to take a laptop out to live gigs. To set up a parameter for Smart Control, you first click on the module you want to control, then drag and drop its icon over the desired Smart Control. The available parameters may then be selected from a pop‑up menu, and as mentioned earlier, one Smart Control can be set to control multiple parameters from multiple modules at the same time. Bank and sound selection via MIDI is also fully supported: MIDI program changes call up both sounds and variations, where the first two digits of the Program Change message define the sound and the last digit the variation.

Navigating around the interface is pretty straightforward; I found I had to refer to the manual rather more often than for Line 6's Pod Farm, but to be fair, TH1 is a very flexible piece of kit with a lot of added features. Even so, it really doesn't take long to get used to it, after which you can lose yourself for hours trying out different combinations of gear. Sonically, I was somewhat underwhelmed by the first blues presets I came across in the presets library — the highly produced sounds were great, the overdrive patches had lots of guts and the clean sounds were fine, but I found little I liked in the way of mildly distorted blues tones. However, it didn't take long to configure some simple amp, pedal and cabinet setups of my own, with just a sprinkle of reverb, which not only worked perfectly well for mildly overdriven blues but also created a more believable impression of the amp being in a real space than many of the competitors. As long as you're prepared to work on the sounds a bit, you can actually get some very evocative blues sounds out of TH1.

The tonality of the final sound depends a lot on the choice of speaker, mic type and mic position, as well as on the reverb and/or ambience you add to it, so it is worth taking the time to experiment; the amp models often have a normal and a bright option for you to try, as well as a choice of channel types. I was particularly impressed with the choice of modelled mics (which includes a couple of ribbon types) and the ability to place them where I wanted them.

Curiously, the reverb effect options don't include any sort of spring — the very type most guitar players are used to — but the rooms and plates sounded extremely good. On querying the lack of a spring, I was told that the designers weren't happy with their (or anybody else's) current spring models, but they will be adding one as soon as they feel the quality is there. There is a revision due in January 2009 that will add some new modules and features, one of which will be a separate and freely positionable noise gate.

I've yet to find a modelling product that provides the same playing experience as standing in front of a real amplifier, but this one does a good job on the sound, with a vast capacity for tonal modification via the generous selection of mic types and positions. The amp models respond pretty well to picking intensity and have a nice sense of tonal colour that conveys a real feel of the original, though the morphing feature means you can create new hybrid amps of your own. The only obvious weaknesses I identified were the lack of a spring reverb model, and the fact that the noise-gate setting is global rather than adjustable on a per‑patch basis (given the choice, I'd generally use a more severe noise gate setting for heavy overdrive sounds and something more benign for clean sounds). Both these limitations are close to the top of the list for a future update, with the noise gate promised for January 2009, but a simple workaround for the noise gate is to assign its threshold setting to a Smart Control.

Overall, TH1 is a very serious and hugely flexible piece of amp/effect modelling software that strikes a good balance between ease of use and features. The library of components is impressively comprehensive (and due to expand further very shortly), while the Smart Controls feature makes it easy to set up ways to tweak your favourite patches without having to get back into deep editing. Live players will also be impressed by the MIDI control side of the program, which I'm told is also going to be improved significantly in the next revision. Definitely one to check out if you want something a bit deeper that isn't too scary!

Obvious native alternatives that take a similar graphical approach include IK Multimedia's Amplitube, the Line 6 Pod Farm and NI's Guitar Rig 3. There are also more focused amp-modelling packages such as Softube's Vintage Amp Room, all of which have their own tonal character.

Though a little more complex than your average guitar-amp modelling program, TH1 is still pretty easy to navigate and is capable of producing some great sounds that compare favourably with competing software solutions. It comes with a huge range of modules, and there are more on the way soon. The Breverb‑based reverbs are also extremely impressive.