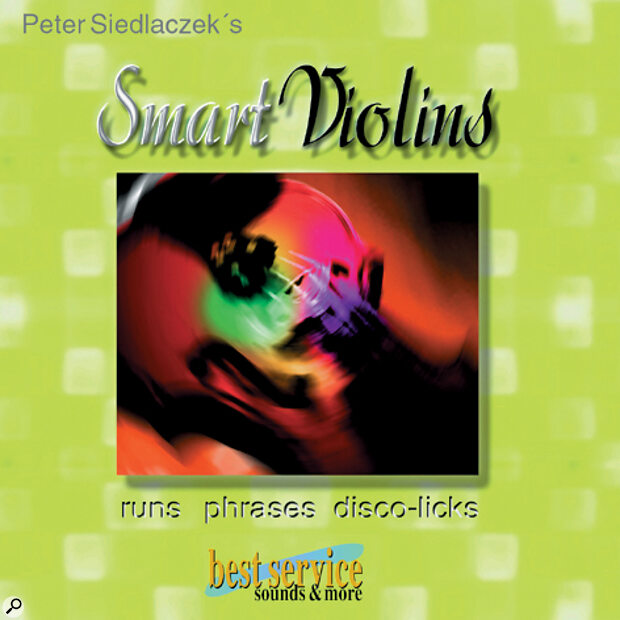 Once again, Germany's premier orchestral team unites to bring the sounds of the orchestra to your sampler. The statistics of this release are impressive: a 16violin ensemble performs around 3500 different licks and 200 multisamples, spread across four CDs. The discs are packed with sounds; CD One contains 496Mb of samples, while the other three each contain between 440 and 460Mb.

The idea is to provide a library of useful phrases for pop and dance production. There are three main phrase categories: first, and most obvious, are fast (mainly 16th‑note) runs, which come in four flavours: straight ascending, straight descending, 'sawtooth' and 'wavy' ascending, the latter based on a rising series of four fast up‑and‑down phrases. Next come rather solemn slow phrases, of which there are two types: an arpeggio figure spanning ten scale steps, and a rising phrase based on the first five notes of the scale. All fast runs and slow phrases are based on the major scale, and all come to rest on a final half note.

The third category, 'Disco Licks', is a collection (36 in each key) of micro‑melodies lasting between two and seven beats. Don't be put off by the name; although some phrases have a distinct whiff of the Bee Gees, others are just simple little lines which could be made to fit virtually any musical style. The majority of these licks have a minor‑key feel, but many can be adapted to fit with a major scale.

There's nothing revolutionary so far, but what really impresses me is that everything is played in all 12 keys, and all the fast runs and disco licks are performed at 100, 120 and 140bpm. The fast runs and slow phrases start on each separate step of the scale, which, depending on the phrase type, gives the user between eight and 21 variations. These variations make it possible to work in minor keys — if you need an Aminor ascending run, choose the key of C major and use the run that starts on the note of 'A'. Such a wealth of choice creates a huge library of phrases which could be cut and pasted into an infinite array of melodic patterns.

The library (which was recorded entirely in stereo at the European tuning standard of A=443) is organised with three keys on each disc. Disc 1 (which offers the keys of C major, B‑flat major and E‑flat major) represents a 'light' version of the library which can be purchased separately. On this disc I was pleased to find a set of multisamples which include loud sustained, staccato, glissandi and repeated detaché notes (the latter called, for some reason, 'Disco Multi'). There are also some mad atonal FX loops performed by players who evidently like a laugh.

Smart Violins is a very useful and extremely well‑presented package. The sound quality is excellent, the ensemble sound is sweet yet biting, and the performances (obviously played to a click track) are unerringly precise — if you play the fast runs in harmony, they track perfectly. Although these samples probably represent another nail in the coffin for session string players, many producers will be delighted to have a such a comprehensive phrase library to hand, and I predict that this title will be a best‑seller. Dave Stewart