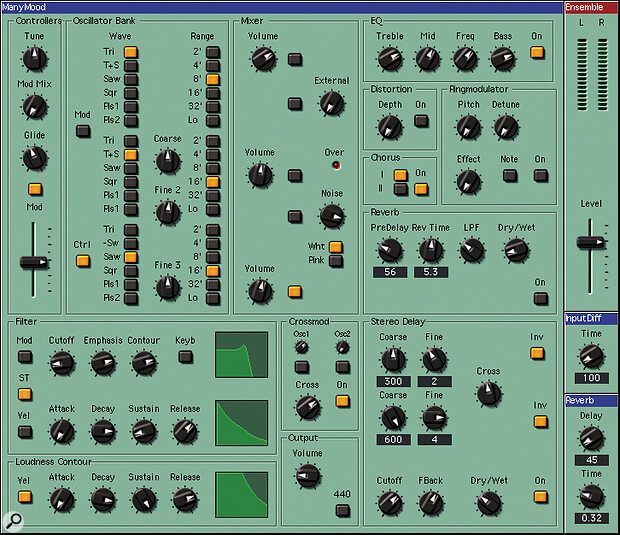 Paul White explores Dynamo, a remarkable suite of virtual synths and drum machines from Native Instruments, offering all the tonality of their acclaimed Reaktor software, but without the complexity.

Back in SOS October 1999, Martin Walker reviewed a piece of software called Reaktor, a heavy‑duty 'knit your own synthesizer' kit that was itself based on earlier Native Instruments packages Generator and Transformator (see https://web.archive.org/web/2014..." target="_self and https://web.archive.org/web/2014..." target="_self). The gist of Reaktor is that the user can patch together elaborate custom synths by combining modular building blocks, and the types of synthesis on offer includes subtractive, FM, wavetable, sample manipulation and even more esoteric possibilities such as granular synthesis. It's a hugely flexible and powerful package, but not everyone wants to spend all their time building virtual dream synths, so Native Instruments have decided to market a simplified version of Reaktor, which they call Dynamo.

All the same powerful synthesis methods of Reaktor are available within Dynamo, but instead of being able to build your own synths, you're restricted to 25 ready‑made instruments — the same set in the 'Premium Library' supplied with Reaktor. However, once you've examined the possibilities on offer, I think you'll agree that the word 'restricted' isn't one that most people would apply, because you can still tweak every knob, button and slider on these 25 instruments to create your own unique sound library. The list of Premium Library instruments starts with '3‑Osc' (a classic analogue synth emulation) at the top and 'Uranus' at the bottom (how appropriate...). For full details, see the 'Preset Instruments' box.

The current versions of both Reaktor and Dynamo are available for both Mac and PC systems and the programs may be used as VST 2.0‑compatible virtual instrument plug‑ins, or via ASIO 2.0 or DirectConnect as stand‑alone applications (Dynamo may also be configured as a Logic Environment object). When being used as a stand‑alone application, Dynamo can be run directly from a MIDI file or played in real time. For live playing on a Macintosh, OMS must be installed. Copy protection is via the now familiar copy‑proof CD‑ROM that must be inserted at random intervals (usually weeks rather than days) when requested. 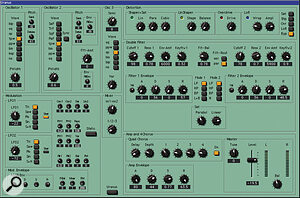 The various ready‑made Dynamo instruments are presented as virtual front panels that open within a plug‑in window. I was initially frustrated by the fact that on my system (a Mac G4 with 15‑inch flat‑screen studio display running Logic Audio Platinum) the VST plug‑in window was always about 10 percent short of being deep enough to allow the whole virtual instrument control panel to be viewed at once, so a little scrolling was necessary to make all the controls viewable. There also seemed to be occasional screen redraw problems with Logic Audio, but once I'd received the update to Dynamo v1.03 (the most recent version at the time of writing), these problems were resolved.

Emagic users are no doubt already aware that Logic Audio doesn't yet support the transmission of tempo information to VST plug‑ins. To get around this, so that Dynamo's sequencers can lock to Logic's tempo clock via MIDI, Native Instruments place 96 bottom C MIDI notes per bar on MIDI channel 16 of the appropriate track, and use these as clock pulses. A default Logic song with the necessary MIDI tempo data ready to paste into other songs is included with the v1.03 update. At sensible tempos, this sync method seemed to work fine. Workarounds are also offered for real‑time MIDI control, as Logic grabs half the available MIDI controllers to use with its own audio mixer automation, so any visiting plug‑in has to make do with what's left. Cubase VST users, of course, can relax, as Dynamo will work on their systems without any of these fixes. Fortunately for Emagic users, a fix for the plug‑in automation problem is allegedly on the way in a forthcoming Logic update.

Most of Dynamo's library instruments come with a good selection of patches to get you started, and if nothing else, these give you a good idea of the type of sound or effect each instrument can produce. Some of the analogue synth patches provided sound breathtakingly good, especially on the 'Uranus' synth. As with any VST plug‑in of this type, you can save and load your own patches, and front‑panel controls may also be automated via MIDI (although it's worth bearing my previous comment on Logic support in mind — and in v1.03, instruments aren't saved with Logic songs, so you need to load them manually each time a song is opened). Each instrument can be set up to access a different degree of polyphony, and as with Reaktor, there's also a choice of sample rates for when processing power gets tight. Dynamo uses up a significant amount of CPU overhead, and seems to grab the processing resources it needs for the selected level of polyphony whether a note is sounding or not, so it's important not to set polyphony higher than you're likely to need it. You can't expect to be able to run a dozen polyphonic parts at once either, unless you have a seriously fast computer, but then the sounds tend to be so sonically complex that even two or three parts could be overkill anyway.

Virtually no instructions as to the use of the instruments is provided in the manual other than a brief description of their functions, so it's really a matter of experimenting. Even so, you can switch on a 'mouse‑over' help function that provides a brief description of each control as you pass the mouse over it. If all else fails, you can modify presets rather than starting from scratch until you get more experience. In most cases, you can get useful results pretty quickly, even if you're not entirely sure how you got them!

As you might expect, the analogue synth modules are the simplest to use, while the granular and FM synths are the least intuitive. Those instruments that rely on samples will also accept your own audio files as samples, but in many cases, the original sample will be (quite deliberately) mangled beyond recognition, especially if fed into a granular synthesis engine. The exception is 'rAmpler', which is probably the closest Dynamo comes to offering anything approaching a 'normal' sampler. 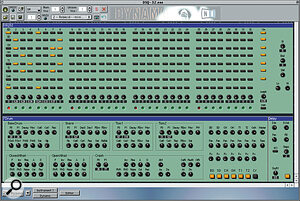 'DSQ32', a seven‑voice 'grid‑entry' drum machine. Dynamo is running as a plug‑in under Logic Audio here.

Overall I'm more than a little impressed with Dynamo, although I'd have been even happier if it didn't use up unnecessary processing power on parts that are not being played. Nevertheless, it's as adept at handling new‑age music or film scores as it is at churning out skull‑crunching techno, and even if you only like two or three of the synths on offer, it's still good value. If you're the type of user who says "where's the GM Piano patch?", you're probably not going to like it, but anyone who's into electronically generated sound should find it a powerful suite of virtual instruments.

Sonic Scope: From Polite To "Beyond Endurance..."

Dynamo provides plenty of sonic scope for both beauty and ugliness. The analogue synths sound suitably sweet, silky, warm or punchy, depending on how you set them up, and they're the equal of pretty much any hardware synth I've played with, but when you move into FM, granular and wavetable synthesis, the gloves are off. It's here that you witness audio being tortured beyond the limits of endurance — shrieking metallic modulation, frozen moments of granular hell and bass sounds that come direct from the iron foundry. The beatboxes are also full of surprises, ranging from polite 'Eastenders' Simmons‑style drum kits to what sounds like a TR808 in a car‑crusher. The generous provision of ring modulators, digital effects and distortion devices means that even the most innocuous of sounds can be turned to the 'dark side'.

A remarkable collection of virtual synths and beatboxes offering all the tonality of Reaktor without the complexity.