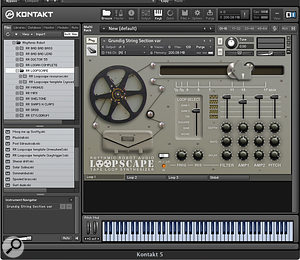 Loopscape is a Kontakt instrument that combines imperfect tape loops of analogue waveforms to create a new — if decidedly vintage-sounding — synthesizer. All Rhythmic Robot instruments require the full version of Kontakt, and every parameter can be automated via MIDI. Each Loopscape voice is built from three loops, drawn from a selection of five familiar waveforms sourced from analogue synthesizers, plus noise taken from atmospheric static. Thus the two sawtooth waves, square, triangle and sine are far from pristine: in fact, they're dripping in oxide and other imperfections supplied by the cranky vintage tape recorders used to capture them. In order to make the most of each sample, there are a number of different loop lengths available, from half a second up to 17 seconds.

Prime numbers were chosen for the loop lengths because of their own special magic, but also so that layering different lengths can lead to a mix that doesn't repeat exactly for a long time. It almost goes without saying that the loops are anything but smooth and seamless, leading to results so wayward that most modern engineers would flee from them, screaming.

After these inauspicious starting points, a resonant low- or high-pass filter makes a worthy contribution to varying the tone of each loop. Then there's a neat four-way LFO matrix with individual rate, depth, waveform and onset delay for modulation of the pitch and filter, with two separate sweeps of amplitude. On the global page, each loop's amplitude envelope and overall level is set. There's no filter envelope, nor is there any way to individually detune or transpose each tape loop, but at least there are a set of basic but serviceable effects: chorus, flanger and delay, plus saturation.

You can almost taste the wow, flutter and print-through as the 24-bit mono recordings faithfully, if perversely, reproduce every blip, hiss and click, and it's these wonky but endearing characteristics that give Loopscape more mileage than you'd think. The samples also have an initial attack blip in them, which proves invaluable for serving up more cutting patches, and is easily removed with a subtle backing off of the envelope attack if necessary.

Loopscape is one of Rhythmic Robot's more expensive instruments at £35, and so doesn't quite fall into the 'impulse buy' category of their others. But it provides quirky good fun, especially for gently shifting pads and background textures. Example patches like 'Shanai Drift' and 'Grundig Soundscape' show off its warmth admirably, and it's hard not to love 'Surf Dude', a patch that makes excellent use of the noise samples. Others, such as the more overtly synthy 'Moog me up Scotty' are less impressive unless you have a passion for stinky cheddar. Paul Nagle

With version 6.1 of the UAD operating system for Universal Audio's DSP cards come two new plug-ins, the MXR Flanger/Doubler and the Little Labs VOG (Voice Of God) low-end equaliser. We reviewed the hardware version of the VOG a year or so ago, and suffice it to say that the plug-in sounds extremely close — so if you want to know more about what it does, check out the Nov 2011 issue of Sound On Sound (/sos/nov11/articles/littlelabs-vog.htm). The ultra-brief synopsis is that it lets you beef up the lows without making everything sound muddy, using just the simplest of controls.

The MXR Flanger/Doubler, on the other hand, is something of an antique, built back in the day when analogue charge-coupled 'bucket-brigrade devices' were the norm for providing delay. Despite being over 30 years old, the MXR Flanger/Doubler is still pressed into service by top engineers for its warm, organic sound — something that straightforward digital flangers often lack. This plug-in version was developed in collaboration with Dunlop Manufacturing, who now own the MXR brand, to ensure the plug-in delivered the required degree of sonic accuracy.

Of course the quest for modelling accuracy didn't prevent the UAD design team from adding a few tricks of their own. Not only have they made the unit optionally stereo rather than mono, but they've added a Single/Dual switch to flip between a single sweep stereo output or a dual sweep where the left sweep direction is the inverse of the right. No modern modulation plug-in would be complete without LFO tempo sync, and the Sweep rate LEDs also serve as sweep reset buttons, so that you can trigger the sweep manually or using automation. Presets have also been created by top engineers and producers such as Neil Dorfsman, Vance Powell and Chuck Zwicky, so there are plenty of examples to get you started.

The plug-in panel has the same elegant simplicity as the original, with switches for Flanger or Doubler mode and for selecting Single or Dual sweep operation. Three further buttons select Mono, Invert (relative polarity of the dry and delayed signals) and tempo Sync. The LFO modulation is controlled by the Width and Sweep Controls, while Mix would normally be left set to about halfway up for typical flanging effects. Regen controls the feedback for making the sweep sound more pronounced, while Manual adjusts the delay time (4.9 to 0.33 ms for flanging or 18.5 to 66 ms for doubling) to control the timbre of the comb filtering in Flange mode and also to allow some non-LFO modulation to be introduced manually. In Doubling mode it sets the delay time but the modulation controls are still active.

As to the sounds that can be achieved in Flanging mode, these vary from a subtle shimmer to something close to tape flanging. I found this reminiscent of my long-departed Electro-Harmonix Electric Mistress, but without the background noise! The ability to have a stereo out with the sweeps running in opposite directions is a nice touch for adding movement and the Invert button emphasises different harmonics for a choice of timbres, the effect becoming more obvious at higher Regen settings.

Switch to doubling and you get a short ADT or Automatic Double Tracking effect — a kind of soft slapback delay with the option to add some subtle (or less so) modulation. ADT never sounded quite like a real vocalist doubling his or her part, but it has become an accepted effect in its own right, so it's nice to have it here as an option. The preset list really shows off the flexibility of this unit, and while flanging and ADT aren't as popular as perhaps once they were, they still rear their heads from time to time in pop and dance music production. Paul White 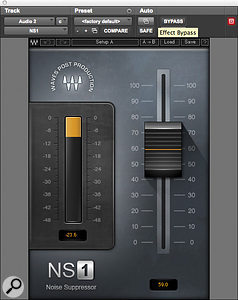 The NS1 noise-suppressor plug-in repackages their existing restoration technologies in a very simple interface, with a single fader. They say that it "instantly analyses and adapts to your signal in real time”. Can 'intelligent adaptive' processing ever be a substitute for user control? There is only one way to find out...

I first tried it on a 'piece to camera' (PTC) clip recorded outside in a noisy housing estate. With no 'learning' or similar, I simply pushed up the fader, and sure enough, the noisy background atmosphere was reduced. This was a good start, so I moved onto a clip of an interview recorded on a noisy exhibition floor. This time I was aware of some pumping of the 'noise' with the desired speech content; I wanted to reach for a Release or Recovery control to smooth out the processing or modify the algorithm, but being a 'one knob' plug-in, it wasn't there.

Next I tried it on an interview recorded in a church in London with plenty of traffic rumble in the background. Again, as I pushed up the fader the low-frequency rumble started to pump with the speech. However, much of the rumble occupied a lower part of the frequency spectrum than the wanted speech, so I tried inserting a high-pass filter before NS1 to roll off the low bass. This meant that when I then pushed up the NS1 noise-reduction fader, it wasn't trying to work on the low-frequency content, but could work on the background noise that occupied the same frequency spectrum as the speech — and it worked.

By way of comparison, I tackled the same content with the Waves W43 and WNS plug-ins, which have more controls to play with. Unsurprisingly they were better, but they are much more expensive than the NS1 and require more user skill. It would be unfair to expect a single-control plug-in to be brilliant on every type of content, but for helping to reduce background noise in real time on a budget, NS1 has a place. Mike Thornton