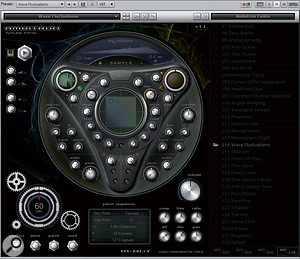 In 2010, Music Regenerative Tools (M-RGT) released their first Virtual Soundscape Generator, psyBOX. For the price of a nice lunch, you get a granular synth offering more control than its rather Spartan interface betrays, with two layers running simultaneously. These can be blended and mixed, and you can muck around with the pitch and grain size of each sound, apply elementary amp envelopes, effects, and so on. Hit the Play button and psyBOX happily churns out a constantly evolving stream of sound. It comes with a goodly assortment of wave files, while a separate version allows you to load your own samples.

More recently, M-RGT have released a similar but more upscale synth called Ambitron, which looks less Spartan and more like a mash-up of HR Giger and a plate of bad mushrooms the night before. It uses granular synthesis for its sound engine, and you load in wave files in the top section, using the provided samples or navigating to the folder where you have your samples stored. The controls for each of the two layers run down either side of the circular faceplate. You can see each sample 'play' in the round spectroscopes, where the volume is controlled by the outer ring knobs. There are three Grain Modes, the state of which is shown by the color of the Mode button. Off disables the Grain Size knob, while orange and green select larger and shorter loops. The Grain Size knob then determines the grain size. Below these 'oscillator' controls are the filters, with dual-concentric ring control for cutoff and resonance. The four filter types are active, but you can turn each one down to remove it from the signal chain.

All this looks and works like a standard synth voice, although the granular synthesis engine sounds different from other generation methods. Once you get to the pitch section, however, standard expectations and operation go out of the window. The Pitch knob tunes the sample, as one expects, while the Width knob above it constrains the pitch range to two octaves or less. But you don't actually use your keyboard to control the pitch: it merely triggers the action that takes place in the central area, which contains a small, bouncing square for each layer, called a Move Module. You set up rules that each Move Module follows as it bounces off the sides of the square (and off the other Move Module, too). The knobs around the Move Vector Control (MVC) control the movement, while the Move Modules themselves control the pitches and other MIDI information. Clicking on the MVC brings up a second page with its own set of knobs. This Fission page is a kind of arpeggiator, while a third, the AMP page, is an envelope controller for the arpeggiator.

The programming is all rather opaque and complex, and even after spending quality time with Ambitron, I am never sure how it is going to sound, but that is part of its charm. Press the keyboard and Ambitron will fire off notes and chords and all manner of controller info which doesn't have the slightest thing to do with the note played, all triggered by the Move Modules. If such complexity isn't enough, you can add randomness to the arpeggiatior operations and/or use them as sources and targets within the modulation matrix. There is also a built-in sequencer, which doesn't sequence notes, of course (that would be too simple), but the preset patches. All this produces timbre and pitch spikes and swooshes, perfect for space sounds and ambient music. But even if you aren't doing soundtracks for NASA, Ambitron can create some wicked, ever-evolving pads. Or you can run it underneath a song, where there are bound to be some happy accidents. If Ambitron provides more accidents than happiness, cut, paste and massage the useful parts into the song. There is nothing quite like it, except psyBOX, which is more of a drone machine. Ambitron is more... animated. It isn't a bread-and-butter synth, but there are plenty of those out there already. Ambitron is something completely different. Alan Tubbs

Although it is a subtle process when compared with all the whizz-bang effects we can now buy as plug-ins, Universal Audio's Precision K-Ambience Recovery Tool was, for me, one of the highlights of last October's AES show. (Ironically, my other highlight was the Unveil ambience reduction tool from Zynaptiq, but somebody else bagged the review on that one before I did!) Employing some innovative left/right crossfeed matrixing coupled with sub-Haas-window delays, respected US mastering engineer Bob Katz has added a few twists of his own to allow the existing ambience in a stereo recording to be increased in level to a useful degree without compromising the integrity of the material. A more detailed description of the process is available in Bob's US patent, which is widely available online (for instance at www.google.co.uk/patents/US7076071). Bob describes the plug-in as a transparent, phase-accurate ambience recovery and stereo enhancement tool that introduces no change to the centre-to-side elements balance unless you intentionally add them using the M/S controls.

The plug-in runs on Universal Audio's UAD2 DSP accelerator and Apollo interface, and is designed primarily for stereo mastering applications, though it can also be used within a mix, where appropriate. The main control is the Ambience knob. Its zero centre position is what Bob considers to be a typical setting — this is not a cut/boost control. Once activated, there are two further buttons labelled Deep and Wide, which determine how the recovery algorithm behaves. In most cases, you'd have them both switched on, with Wide used on its own where a more subtle treatment is needed. The recovered ambience then passes through the filter section, comprising a parametric section flanked by low- and high-cut filters. Mid/Side Gain controls adjust centre-to-side balance while Left/Right Gain controls set the final output level and allow the left/right balance to be adjusted. Interestingly, the plug-in can also add a sense of stereo spread to a mono source.

I tried the plug-in both on final mixed tracks and also on some sampled drum parts that included room ambience. In both cases, the effect of bringing up the ambience was to help glue the sound together and to enhance the sense of it taking place in a real space. As with most processes, it is possible to overdo things, though Bob has tried to restrict the adjustment range so that it won't go too far beyond what might actually be required in real life. Adding a little 'air' EQ to the ambience breathes life into the sound and it is worth experimenting with the three permutations of Deep and Wide, as different settings suit different material. It must be stressed that what this plug-in adds is based on what already exists in the recording, so while it is described as an ambience enhancer, it is neither an enhancer in the usual sense of the word nor is it an ambience generator. Instead, it's an ingenious tool that is genuinely useful in a mastering (and occasional mixing) situation. Paul White