It's not always possible to track vocals in the best of recording environments, and at SOS we've long been advocates of the use of acoustic shields such as the sE Reflexion Filter. Such devices help you to capture the drier vocal sound that seems to be a trend these days — and if you want reverb, they mean you can dial in your choice of artificial ambience rather than forcing you to live with your studio's own sound. 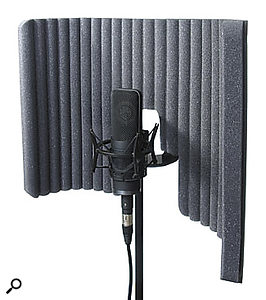 Various companies have followed sE's lead, either with outright imitations or with their own, slightly different takes on the same theme. Primacoustic's Vox Guard falls into the latter category. Much lighter than the Reflexion Filter, I found it easier to mount on a lightweight mic stand without drooping or toppling. It's also quite large in comparison with other such products I've tried, and there are pros and cons to that: on the plus side, it works over a wider surface area to prevent sound travelling out into the room; on the down side, it can be a bit more cumbersome to store, and can restrict visual communication a little. I didn't find the latter to be a real problem in practice though.

As with any such device, to get the best results, I needed to place another absorber behind (a treated corner of your room would be fine, but I simply hung a polyester duvet there). Otherwise, you still risk unwanted reflections coming from behind the vocalist to reach the mic. With the duvet in place, the Vox Guard seemed very effective at keeping vocal recordings nice and dry. It might not be the most exciting addition to your studio, but it could certainly be one of the most productive.