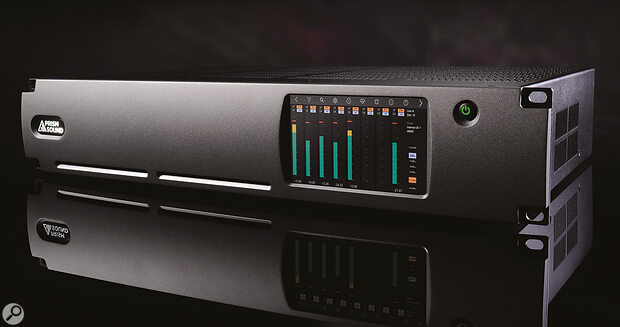 Digital technology has progressed at speed over the last few years, so the fact that Prism Sound’s ADA‑8XR has remained unsurpassed as the company’s flagship multichannel A‑D/D‑A converter for nearly 20 years is remarkable. But in early September, Prism invited SOS to their offices in Cambridgeshire to get a sneak preview of the new top dog: the Prism Sound Dream ADA‑128, which should just have been announced as you read this.

Named after its remarkable ability to provide up to 128 channels of premium Prism conversion in a single 2U rack, the ADA‑128 is a modular device that can be configured to a wide range of needs thanks to its ability to host a number of different expansion cards.

The card slots fall into two categories. The first four slots are intended for Host cards, which for now include Dante, MADI and DigiLink options (other connection types are apparently in the works). Notably, the ADA‑128 lets you mix and match these, and even route audio between them. So, with multiple Host cards installed, you could have audio from your Dante network sent to and from a Pro Tools rig, or share a MADI stream with a Dante‑connected computer, to give just two examples. And because the ADA‑128 houses four internal, independent clocks, those systems can all be running at different sample rates.

The remaining slots are for I/O cards, of which a single ADA‑128 can host up to 16. At present, there are two analogue cards available, each providing either eight line inputs or eight line outputs. There’s also a digital AES3 option, offering eight I/O in one slot.

Finally, there’s a mic/line input module, which houses eight preamps. You can control these either via the front‑panel touchscreen (indeed, you can control pretty much all of the ADA‑128’s features locally), via the browser‑based interface (more below) or, if you’re using the ADA‑128 as an HDX interface, directly from within Pro Tools. The way Prism have achieved this is rather clever: when loaded with a preamp expansion and a DigiLink Host card, the ADA‑128 presents itself to Pro Tools as an Avid Pre 8 rack, and then piggybacks onto the DigiLink connection to send control data to the preamps.

Fully loaded, the ADA‑128 can provide up to 128 channels of conversion in its 2U form factor. These channels can then be freely routed to up to four Host cards simultaneously.

Driving the thing is an intuitive affair, thanks to the five‑inch hi‑res colour touchscreen on the front panel. Although the interface hadn’t quite been completed at the time of writing, all the important parts of the GUI were there, and setting up routing, metering, sample rates and so on was as simple as operating a mobile phone.

For installations where the rack is tucked away in a machine room, an Ethernet port lets you connect the ADA‑128 to a network and control it using an HTML browser running on any computer on your LAN. This would come in particularly handy if you were using an ADA‑128 as the hub for a multiroom facility: you could easily reroute audio from a Dante box in the live room to a Pro Tools rig in your post‑production suite, all from a laptop, tablet or even smartphone connected to the café Wi‑Fi.

Given the ADA‑8XR’s longevity, it’s reasonable to expect that the newcomer will be around for quite some time.

Internally, the ADA‑128 can operate at sample rates up to an obscene 768kHz, though as most protocols only allow for 384kHz, that’s your practical limit. The ‘brain’ of the unit is an ARM CPU, and this controls a number of FPGAs: one is dedicated to signal routing, and there’s one on each of the expansion cards. These perform DSP duties, let the ADA‑128 identify what I/O it’s fitted with, and even provide real‑time data on power usage so that the PSU never overloads. Prism tell us that power efficiency was an important consideration when designing the ADA‑128, because they were adamant that it shouldn’t require a fan.

No official noise or distortion specs had been released at the time of going to press — Prism were still working on shaving a few precious decibels off the noise floor at the time of our visit — but given their past form, we expect the figures to be very, very good indeed. The inevitable downside to this glut of both quality and quantity, however, is that the ADA‑128 will not be cheap. That said, and taking into account the channel count and quality, Prism tell us it will actually be more cost‑effective than trying to configure an equivalent system using the old ADA‑8XR racks.

You probably won’t see many ADA‑128s in bedroom studios, then — but in professional environments, such as music recording studios, post‑production houses, multiroom facilities, OB trucks and mobile recording studios, the ADA‑128 will be very much at home. Indeed, the first few models are already spoken for by some of the most prestigious institutions in the world, including the Birmingham Conservatoire and the Royal Northern College of Music.

Given the ADA‑8XR’s longevity, it’s reasonable to expect that the newcomer will be around for quite some time. To find out whether it lives up to expectations, we’ll be giving it a proper real‑world test in an upcoming issue of Sound On Sound.

Prism’s latest product is a serious bit of kit that aims to raise the bar for high‑I/O‑count audio systems.