When you're on a budget, you'll need one mic to perform a range of duties — and this one seems to punch above its weight. 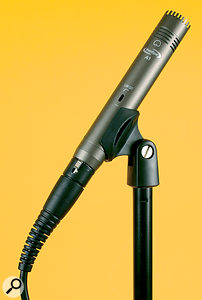 French manufacturers Prodipe have designed their A1 mic for use on a range of sources, but particularly recommend it for use with plucked or bowed string instruments, including acoustic guitars. It's an inexpensive, small-diaphragm, back‑electret condenser mic, with a fixed cardioid pattern and a switchable low-cut filter at 100Hz, accessed via a recessed switch on the side of the body.

The A1 is conventionally constructed, having a cylindrical metal body with slots in the end to allow sound into the capsule, and slots in the side for the rear porting, to create the cardioid pattern. The finish is an attractive brownish-grey satin coating.

Perhaps the most revealing thing about the information provided with the mic is the shape of the frequency-response curve, which kicks up by a couple of dB at very low frequencies, but is otherwise extremely flat from 50Hz to 2kHz. Above this, there's some deliberate contouring: the main presence peak is a broad hump centred at around 7kHz, where it rises to about 4dB, giving the high end a helping hand without being excessive. This characteristic usually translates into 'airiness' or 'breathiness'. Another, much smaller, hump of around 2dB occurs at around 3kHz, which is in the vocal presence region but can also help bring out the sound of plucked strings, such as acoustic guitar.

With the filter switched out, the A1 has a well‑extended bass response, which should make it suitable for use with a wider range of instruments than the recommend application of bowed- and plucked-string instrument recording. The frequency response is quoted as 30Hz to 18kHz, with a sensitivity of ‑38dB ±2dB (0dB=1V/Pa at 1kHz). While not particularly low by modern standards, the EIN noise figure of 20dB A‑weighted is adequate for most studio close‑miking applications, and equates to a signal‑to‑noise ratio of 74dB. The A1 operates from standard phantom power and is supplied with a simple stand clip and a foam wind-shield.

I thought that acoustic guitar would be a good place to start my tests, and I was generally impressed by the results. The low end was confidently solid and nicely balanced by the detailed but non‑aggressive high end. The acoustic guitar came across with just the right amount of articulation: detailed without being gritty or glassy, and with a nice humming drone underpinning strummed chords. Next to a seriously high‑end mic, the sense of focus and clarity may not compare quite so favourably, and the high end may not be quite as smooth, but in the sub-£100$100 sector this mic should make getting a good acoustic guitar sound very straightforward. I also appreciated the way it dealt with hand percussion, especially the Turkish Darbuka, which has a lot of metallic overtones. The percussion results were really detailed and lively, again with a strong low end, but without anything being obviously over‑emphasised.

My next test was to record a guitar amp, and this was a task the A1 managed better than I expected, with all the detail and warmth you could wish for, and with no gritty top end. Finally, I stuck a pop shield in front of it to record vocals. Although physically small, with a capsule around half an inch in diameter, there was nothing small about the vocal sound: it captured a really good balance of chesty depth and airy detail. Indeed, it produced just as good a result in this respect as some far more costly large‑diaphragm studio mics I've tried, so don't let anyone say that you can't use small-diaphragm mics for serious vocal work.

The noise performance of the A1 means that it can only really be recommended for close‑miking applications, or where the sound source is quite loud, but it manages most routine studio tasks in a capable and musical fashion. While you could better its performance in all respects by spending more money, the reality is that in most home studios a mic of this quality will not be the weakest link in the recording chain, and used with care it really is capable of excellent results. The A1 is a real jack of all trades at a bargain price — although not without some stiff competition in the same price range.

There's quite a lot of choice in the budget half‑inch capsule mic market, including some back‑electret and other conventional capacitor models. Here's a handful that come in at a similar price: Superlux CMH8K/U, Behringer C2, Beyerdynamic Opus 53, Rode M3, AKG Perception 170, SE Electronic SE1A. All have their own characters so, if possible, you should try as many as you can before deciding which is right for you.

A cost‑effective mic that can cover just about any project studio application in a capable manner.