This collection from Zero‑G contains 560MB of unique samples, packaged into the usual collections of 'Acidised' WAV files and Apple Loops, along with a Reason Refill, REX2 files for the loops and EXS24 and Kontakt patches. There are folders (grouped by bpm tempos of 122, 125 and 127) containing beats, bass lines and synth lines, as well as additional folders for drum hits and effects. 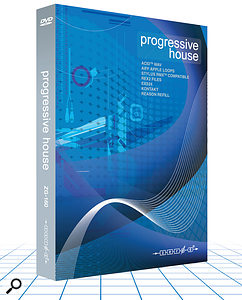 The first thing I noticed about the sounds is that they really are quite crisp and clean and seem to be less processed than a lot of sample libraries. That is, I guess, inherent in the style of the music, and it's nice to hear well‑crafted loops and bass/synth lines that can fill up a lot of sonic space without being overly complex. Part of the reason for this is the use of reverbs and delays on a lot of the melodic parts. In contrast to many current genres, progressive house has always been about the use of reverbs and delays to give an almost 'epic' quality to the tracks, without needing to fill up space with additional instrumentation. I'm pleased to say that the samples here do just that and, in my opinion, do it in a pretty classy way. Not all of the samples are treated like this, however, and there are probably more delays used than reverbs. But it does mean that things rarely sound cluttered or overly fussy.

I found that a lot of the samples are quite 'bouncy' and the grooves of the loops and the effects used are, occasionally, very slightly out of time — although, in a way, that makes them more rhythmically interesting. The sounds themselves also tend to be on the 'minimal' side, rather than big, lush and bursting with unison detuning. I notice many sounds that I would guess are FM based, and this makes a nice change from the dominance of vintage analogue gear in sample libraries. The tone of these sounds means that they would also blend nicely with samples from other collections, by cutting through in a very '80s DX7 way. The drum hits are all well chosen and, again, tend to veer towards a slightly 'retro' sound, which is a good complement to many of the other sample CDs that I've purchased in recent years.

Overall, then, I think that Zero-G's Progressive House collection would make a good addition to existing sample libraries, on the grounds that it offers something sonically different, clean and not over‑processed. The material provided here can either form a good foundation for a track in its own right or be a nice addition to existing tracks. Simon Langford