Hammond created their so-called ‘scanner’ chorus/vibrato circuit using a hybrid of electronic circuitry and mechanical switching. At its heart is a nine-stage LC phase-shift/delay line similar to what you might find in an analogue phaser pedal; but the delay time is modulated by a rotor arm switching between the outputs from the individual stages using a capacitive non-contact system. This has the effect of crossfading the nine delay steps rather than switching abruptly from one to the other, though the effect is still slightly ‘lumpy’. By cycling upwards and then back again, 16 steps are used to create each modulation cycle. Blending in some of the dry signal makes a chorus-like effect possible, as well as pitch vibrato. 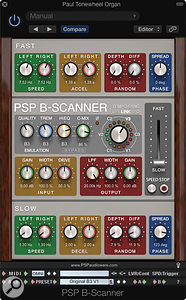 PSP’s B-Scanner plug-in replicates the vibrato, but offers far more scope to create effects outside the range of Hammond’s original design. Looking very similar to their L’otary rotary speaker, the B-Scanner interface is divided into colour-coded panels, with three main sections including separate fast and slow speed settings with ramp-up/down inertia. A rotary display shows the scanner activity in green and red for the two channels, with yellow showing when they are in phase. Random modulation to create variations between the channels is available to emulate worn (or broken?) hardware.

A Mode Selector engages one of six emulation modes, while the speed section is somewhat like that of a rotary speaker with fast, slow and stop options, but also with the ability to set different speeds for the left and right channels. The speed lever may be used as a continually variable control or as a switch. HF EQ is also provided along with a ‘HiRes’ option that uses a 25-stage, 48-step emulation rather than the nine stages in the original. And if this still isn’t smooth enough, there’s a completely smooth option that strays even further from the original. Amplitude modulation or tremolo can also be dialled in and the wet/dry mix is variable. Other niceties include a stereo Spread control, Drive to add some amp saturation, and tempo sync’ing.

Sonically, the ‘original’ presets create the charming lumpiness of the original, while choosing a smoother setting creates a more polite result. It is possible to get close to a rotary-speaker sound but without split-band modulation. There’s definitely something endearingly retro about the scanner sound, which PSP have emulated very faithfully, and it makes a useful alternative to the traditional Leslie sound, as the tonal changes caused by the Leslie cabinet are absent and the modulation character is sufficiently distinctive from standard chorus and vibrato. It also works well on a range of instruments from organs and synths to guitars and voices. In all, a very useful modulation tool.