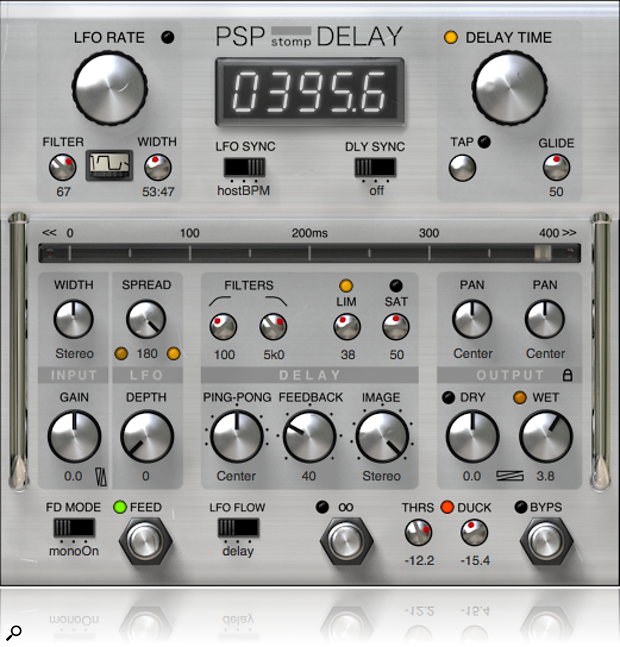 PSP’s StompDelay is a delay plug-in designed to produce a wide range of mono or stereo delay-based effects, and its inbuilt multi-waveform modulation allows it to double as a flanger, chorus device, tape echo or extreme effects generator. A key design point is that its controls behave much as they would on a mechanical tape echo machine: so, for instance, adjusting delay times produces a pitch-slurring effect during the changeover, which can be further smoothed using a Glide control to add inertia. Pitch and time changes all sound very smooth and invite dub-style performance control.

Saturation and limiting can also be added, so the results run the gamut from very tape-like delays to assertive and gritty effects. Stereo ping-pong delays are also catered for and there’s a so-called Infinity mode that essentially freezes a loop of delayed sound. Delay times can be entered manually in milliseconds or beats per minute, set using a Tap button or sync’ed to the song tempo. The modulation LFO can be sync’ed too; and in both BPM and Host modes the Tap button can still be used to set the nearest note value.

The plug-in name relates to its layout, which looks like a stompbox with three footswitches. Obviously they can’t be used as such, unless you have a touchscreen and don’t wear socks, but everything can be automated. You can also use MIDI in those DAWs that allow MIDI data to be routed directly to an effects plug-in (which is most DAWs other than Logic Pro). The leftmost switch, which can be set to latching or momentary operation, kills the feed into the delay, while the right switch acts as a conventional bypass, so you can choose whether you want to keep the delay repeats intact after switching. The middle switch activates the freeze looper, and a slide switch determines whether the LFO modulation is applied to the looped sound, to the delay engine or to both. For the main signal path, there’s also control over the input level and stereo width, as well as separate pan and level controls for both the wet and dry outputs.

What sets the LFO section apart from most delay units is the large selection of complex waveshapes that are available in addition to the usual sine, sawtooth, square and so on. Furthermore, these can be smoothed using a Filter control and offset between the left and right output channels. There are also two random settings, one of which is a randomly modulated sine wave that works well for some chorus or tape flanging effects.

When it comes to delay time, you have the expected delay time control in the top right of the panel with its associated Tap tempo button and the aforementioned Glide control. However, there’s also a horizontal control strip running the full width of the control panel that can be used as a delay-time slider, and this can be used to create all manner of tape slowing/speeding up effects. The slider’s range can be changed using arrows if you need more precision. In addition to controls for feedback, ping-pong delay and image (stereo width) there are also variable high– and low-cut filters, an adjustable limiter and variable saturation. Finally there’s a very effective ducking option that pushes the level of the delays down when the track is playing but allows it to swell during pauses. Some of the knobs can also double as switches; so, for example, ping-pong, filtering and feedback can be switched on or off by clicking the corresponding knob.

Overall the plug-in lives up to its aims: it can be used as a straightforward digital delay, pseudo tape echo or anything in between, while the modulation section, saturation and filtering, plus the ability to offset the modulation between the two channels, makes it easy to set up textural shimmers or blurry analogue delay effects. The delay time goes short enough to set up authentic-sounding flanger and chorus treatments, and the delay ducking is as good as any I’ve used. The ability to meddle with the controls in real time to create smooth tape-like speed change effects is also very appealing and should help win over dub producers and experimental music-makers. Best of all, you get all this flexibility without any unnecessary complexity, so it really is just a case of plug in and have fun.