Though Leslie aren’t the only manufacturers, their name has become almost synonymous with the rotary speakers that are a mainstay of the drawbar organ sound. Over the past half century or so, the rotary speaker has also been pressed into service treating guitar, synths and even vocals. 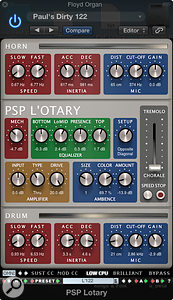 Rotary speakers were initially developed to add some interest and movement to the somewhat static sound of electro-mechanical and electronic organs, back in the day when electronics was not really up to the challenge of adding more than basic tremolo or vibrato. As it turns out, recreating the famous Leslie effect electronically is quite challenging, even today, as there’s a lot of complex interaction between the mechanical, electronic and, especially, the acoustic parts to take into account. Leslie’s approach was to use separate bass and treble speakers, firing into rotating sound deflectors driven from separate motors, though some other designs did actually employ moving speakers. All these elements added complexity to the end result.

PSP’s L’otary plug-in, which supports all the usual Mac and Windows platforms (AU, VST, RTAS and AAX), emulates the upper and lower rotors of a typical Leslie speaker, fed via a passive 800Hz crossover. The upper section models a rotating horn flare fed from a static compression driver while the lower section models a woofer facing into a rotating drum fitted with an internal reflector. In a real Leslie speaker, these drivers have quite quirky frequency responses, and the overall tonality, especially when overdriven, is also shaped by the amplifier circuitry — earlier valve Leslies can sound quite different from later solid-state models. All of this is faithfully modelled here, which is why you’ll hear quite a dramatic tonal change even when the virtual motors are stopped.

On the horn section, which is at the top of the rather colourful interface, the user can change the slow and fast speed setting as well as the acceleration and deceleration of the virtual rotor. Additionally there are settings relating to the virtual microphone pointing at the virtual rotary horn, specifically distance, low-cut filter frequency and level. Visually, mechanical settings are red, while anything relating to mics and room ambience is blue.

The drum section handling the low frequencies is at the bottom of the screen, and has the same controls as the horn, other than the filter, which is a variable high-cut. That leaves the centre section, which includes a number of separate but important functions, not least the tremolo/chorale speed control lever, speed-switch button and brake button. A Mech knob adds mechanical noise, which becomes most evident at the fast speed setting and which really enhances the realism of the effect.

Finally, a four-band EQ provides overall tonal control, while the amp section shown in yellow has variable input level and drive controls, plus a three-way selector switch for the amp type, which can be solid-state, valve or ‘thru’. The differences are most evident at advanced drive settings. The two blue centre sections include the Setup switch, which gives a choice of amp only, four different stereo miking arrangements or one mono option. Below this is the Ambience section with controls for room size, tonal colour and amount. Moving-light bars show the speed and direction of the upper and lower rotors, which move in opposite directions just like the real thing.

The magic of the rotary speaker is in the way the mechanical inertia of the moving parts affects the fast-to-slow speed change and vice versa, producing a wonderful tonal complexity — and L’otary’s parameters provide full control if you’re not happy with the presets. All parameters may be automated, though in Apple’s Logic, speed changes have to be automated via the Tremolo-Chorale speed lever, not the speed button. It’s also worth noting that some of the parameters will cause audible glitching if automated, specifically the ones you wouldn’t normally expect to automate such as miking mode or mic distance, as it takes a little time for the plug-in to compute the new parameters. All the speed-related parameters work perfectly smoothly when automated.

Provision is made for MIDI control using sustain to toggle tremolo speed and mod wheel for smooth speed change (on any selected MIDI channel or omni) but again, Logic users are denied this as incoming MIDI can be routed only to the track instrument, not to effects. Again, this is not PSP’s fault.

Because of the complexity of the detailed modelling, this plug-in is quite CPU-hungry, but as you’re rarely likely to need more than one instance in a mix, that should be acceptable. If it’s a problem, there is a Low CPU mode — though in a mix that otherwise barely tickled the CPU meters, even that still showed activity peaking at around half of my 13-inch MacBook Pro’s resources, according to Logic’s CPU meter. There’s very little subjective difference between the end result in the two CPU modes; if anything, the Low CPU mode is slightly more gritty-sounding.

Sonically, I found the ‘stereo front’ or ‘front diagonal’ miking options to sound best, and I was surprised at how much difference the mic distance, filter and ambience settings make; you can move from a fairly live, roomy sound to something much more direct and intimate. If you’re not a stickler for absolute authenticity, you can automate the speed lever to carry out the changes even more slowly or to dwell in between the extreme settings, something that can work well if you’re treating something other than a traditional drawbar organ part. Piling on the drive in tube-amp mode adds just the right kind of grit and grind to the sound.

Overall, I think L’otary captures the swirly, ‘graunchy’ character of the real deal pretty well. Many DAWs now come with their own rotary-speaker plug-ins which are less CPU-hungry, but L’otary is more flexible and more authentic — and the more you tweak the various parameters, the more you come to appreciate how versatile it really is. I can see this is a plug-in that I’m going to be using on a regular basis, and not just on organs.

L’otary is a very serious attempt to recreate the sound of a real miked Leslie-style speaker, with various mic setups giving the choice of solid-state or valve amplifiers.