It was once the case that, to introduce a little randomness to your voltage stream, you’d reach for a Sample & Hold module fed by a noise source. These days, it’s quite common to obtain S&H straight from an LFO, but in the diverse world of Eurorack, there are far more exotic and refined choices. One of these is Chance from Qu-Bit, a module featuring nine simultaneous outputs for jittery, wobbly chaos. 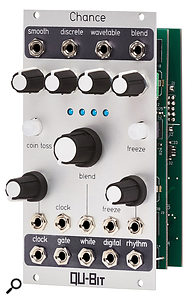 Size: 14HP. Current: +12V = 45mA, -12V = 17mA.The module rejoices in Qu-Bit’s typically clean and uncluttered appearance; a pleasant alternative to the often crammed and busy panels of the competition. Along the top are the four random voltage outputs, each with attenuverters. Their range is ±8V, so they will come in handy for sticking to the limits preferred by some modules.

Allegedly inspired by John Cage’s interpretation of the Chinese divination text, I Ching, random voltages are generated for each digitally-generated coin toss. While the first two outputs — Smooth and Discrete — might resemble the promises of a high-class escort service, in practice they deliver results on a par with old favourites Sample & Glide and Sample & Hold. At the Smooth output you obtain a linear transition between each random voltage. In contrast, each voltage generated by Discrete remains constant until the next toss. Moving along, Wavetable departs from familiar territory because, instead of a new voltage for every coin toss, a new wavetable is summoned, complete with a randomly-selected time division that sets the speed of its playback.

With any new source of modulation, it’s often worthwhile aiming the various outputs at an oscillator’s pitch for the clearest illustration of what’s going on. Taking the Wavetable source, a switch from rising to falling or from smooth to stepped output is unpredictable, but within a specific range of possibilities and shapes. The last output of the random quartet is Blend, which incorporates automated switching and mixing of the previous outputs from a single point. Using either the large Blend knob or its CV input (±5V), you can flip between the individual algorithms or mixes of any adjacent pair. It’s tempting to think that this single output would be all you’d need but actually, the presence of the others is welcome too, thanks to the individual ranges and polarity.

Joining these random voltages are outputs designed for triggering purposes. Burst generates random gates — unquantised flurries of events that bear no relationship to the clock speed, except that the bursts are sparse at the lowest Rates, becoming dense and manic as you turn the Rate knob clockwise. The internal clock has a range starting at 15 seconds between pulses right up to 50Hz so your bursts can be as intermittent as a dripping tap or as insistent as a dentist’s drill.

Naturally you can control the rate with an incoming CV or replace it entirely with an external clock. Along with the clock output, there’s an analogue noise source available, plus a less commonly-encountered Digital noise output. The latter does a decent impression of a crashing 8-bit computer game and consists of lots of mashed-up square waves. This, it transpires, is a welcome alternate source of randomness for a variety of purposes.

Last but not least, the Rhythmic output produces quirky little rhythms starting at whole notes but reaching 16th-note triplets. In other words, the very slowest setting produces a single rhythmic pulse for every four pulses of the clock. One downside of employing a regular knob for Rhythm is the lack of visual indication for values, making it tougher to dial up precise divisions with confidence. If specific values are required (eg. sometimes you might wish to avoid triplets), you’ll be glad of the CV input which can be paired with modules such as Make Noise’s Pressure Points. For each coin toss, a new rhythmic division is generated, but if you wish you can stop the process and maintain the current rhythmic value by hitting Freeze.

The Freeze button (or input) halts the random seeding and its effects vary according to the output(s) in use. For example, the Smooth output continues changing until it reaches its target voltage but Discrete remains constant. As for the Wavetable, it loops the current shape and clock division. When an external clock is used, the Rate knob is the rate at which the Smooth output moves to its target voltage. So depending on the speed, you might never get there before the next clock-initiated toss.

Chance is a convenient and friendly source of random voltages, triggers and even simple rhythmic elements. While it isn’t the most radical new module, it provides several discrete flavours of unpredictability that should be appreciated by all lovers of self-generating, evolving drones and atmospherics.