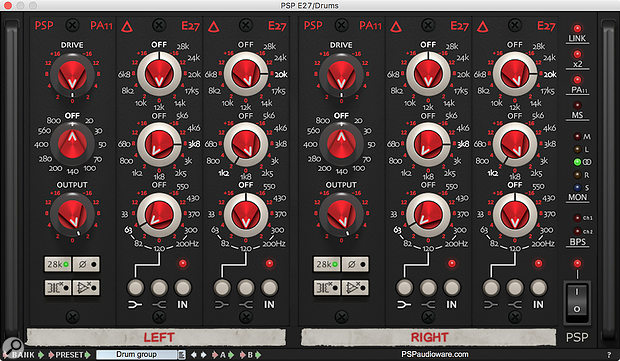 Does this Polish plug-in capture the character of an American classic?

Poland-based plug-in specialists PSP Audioware have a reputation for building versatile and much-loved effects, including the time-honoured Vintage Warmer 2 multiband compressor/limiter and a manufacturer-approved replica of the legendary Lexicon PCM42 stereo delay. Now PSP have teamed up with US-based hardware manufacturer Avedis Audio, and the result of this collaboration is the impressive PSP E27 equaliser plug-in.

E27 offers three filter bands, each of which offers 16dB of boost or attenuation at nine selectable frequencies. These can be doubled up by hitting the x2 button, providing you with a total of six bands per channel. The filter frequencies have been specifically chosen to produce the most usable and musical results, and while restrictive, the non-linear characteristics and the progressive Q add something special on individual sounds, group channels or the entire mix. But do keep an eye on your CPU load if you intend to use this plug-in on multiple tracks at once. It can be very taxing on your system.

One particularly useful feature that has been carried over from the hardware unit upon which the E27 has been based is that slow dial movements produce small, more accurate boost/cut adjustments, whereas fast movements produce much larger, quicker changes.

It’s said to be good practice when mixing to cut the frequencies you don’t want rather than boost the ones you do, but with E27, I found I could achieve fantastic results by using boosts a little more liberally than I would normally. Boosting is audibly pleasingly not only because of the well-researched frequency selections but because PSP have modelled the subtle coloration added by the analogue circuitry in the original hardware, which imparts a lovely sense of warmth and thickness to whatever you throw at it. The results are way more rich and impressive than those produced by the EQ plug-ins built into typical DAWs, the flip side being that this is not really a surgical EQ.

The level of saturation added by the plug-in is controlled in the PA11 preamp module, where you’ll find a Drive control for adding or cutting the level of saturation by 16dB in each direction. There’s also a 28k button, which engages a gorgeous-sounding bell filter at that frequency. This adds a subtle sizzle, shimmer and a little more presence to the audible higher frequencies of a variety of sounds, especially when used on hi-hats, strings or vocals, for example. PA11 controls also include polarity reversal, while two separate buttons enable you to bypass the input/output transformer (known as TrafoX in the plug-in) and the amplifier/active filter circuit emulation (known as AmpX) processing. These essentially switch off the non-linear behaviour of the unit and can be deployed if a little too much distortion is being added. In fact, PSP recommend doing this when clean linear filters are needed for mastering situations.

Another useful feature for testing the results of your settings is that each band, as well as the PA11 Drive section and the analogue-simulated filters, can be bypassed at any time, in either channel. This enables fast and efficient A/B testing as you mix. There’s also a very helpful set of presets that offer a fantastic basis for your sonic sculpting, especially the presets dedicated to drums and bass.

One last thing to note is that the E27 comes bundled with a simpler version, called the E27se (or ‘single edition’), which strips back the amount of controls and simplifies the GUI. This version of the plug-in is handy when you want to make quick adjustments and do not need to separate the left/right channels nor make use of the M-S processing.

If you feel your DAW’s EQ is a bit characterless, PSP’s E27 could be the answer. In some ways, its best feature is that there’s only a limited number of the frequencies you can select; you can get on with mixing in a hassle-free way, which is both fast and audibly pleasing. At bottom, E27 is a very musical EQ plug-in, and it rivals some of the best modelled preamp and exciter units in the way it suggests analogue warmth and thickness.