As every Dark Side Of The Moon fan should know, a prism is a three-dimensional object that refracts light. The Qu-Bit version, one is led to suppose, is the audio equivalent. In their own words, the Prism is “a multi–dimensional signal processor that creates a framework for the spectral metamorphosis of any input signal”. If I may be permitted to translate this marketing speak, Prism is an effect module capable of combining three distinct elements: delay, filter and decimation. 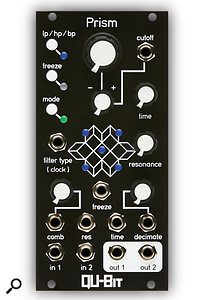 Qu-Bit Prism. Size: 12HP. Current: +12V 90mA, -12V 10mA.Housed in a smart 12HP, skiff-friendly module, the Prism is a stereo effects unit. There are two main audio inputs and outputs. The first element is the digital delay line. The time of the delay can be adjusted from very short (a few milliseconds) to around two seconds, allowing for anything from chorus, flanging and comb filtering to traditional tempo-based delays. There is no dedicated feedback control, instead a single knob adjusts both the dry/wet and feedback simultaneously. A Freeze function repeats the delay buffer indefinitely for glitchy effects. Freeze can be switched from momentary to latching depending on your needs, and this also changes how the Freeze CV input responds.

The next piece of the puzzle is the sample-rate and bit-depth reduction, which can be switched via a mode button to be pre– or post–filter. Both sample rate and bit depth are adjusted with a single control called Decimate. At subtle levels, it introduces a lo-fi, ring-mod–style aliasing to any signal passed through it. At more extreme settings it goes into severe decimation and all-out destruction.

The resonant filter is switchable between low-, band- or high-pass and normally sits at the end of the signal chain, unless you choose the decimator to be there instead. I’d describe the filter as digital sounding, but not in any unpleasant way. It will not self-resonate. If you want to overdrive the filter, you’ll have to amplify the signal before it reaches the module as there’s no input gain.

Every control on the Prism has an equivalent CV input, with an added attenuverter control for the filter cutoff. The Filter Type CV input can be repurposed via a secret button combo to act as a clock source for the delay. When in this mode, the delay time control becomes a clock divider, allowing for tempo sync’ed delay times. The Freeze buffer also becomes tempo sync’ed, resulting in wonderful tempo-locked stutters and glitches.

A scattering of LEDs helps to identify various modes, tempo and effect depths — handy, for there is a lot of CV control being used and the front–panel knobs don’t necessarily show accurate values. Plus, who doesn’t love a light show?

As you might expect, the filter, delay and decimator can operate independently. But it’s in combining them that things get interesting. The order of the effects isn’t what you’d expect, with the delay being before the filter, and this gives it a character I’ve not heard before in a delay — or for that matter a filter. It excels at lo-fi washes of down-sampled, filtered delays. However, the real fun starts when you introduce CV modulation. Combining sequenced bit-crushing with clocked delay, Freeze triggering and gratuitous filter control results in wonderful rhythmical mayhem. I can imagine the Prism finding a happy home in any modular rig that prizes sequencing.

It excels at lo-fi washes of down-sampled, filtered delays. However, the real fun starts when you introduce CV modulation.

The Prism can be used in a multitude of ways, and I like it for that. One day it can be used as a simple filter or bit-crusher. Another day, it will be the star of the show, providing glitched, rhythmic, delay-based effects which would otherwise take four or five modules to make. I had particular fun creating stereo percussion lines by pinging the comb filter with different rhythmic pulses at the left and right inputs. Combining this with sequencing of delay times, filter and Freeze brought forth some charming Aphex Twin-like percussive sequences. During another patching session, it served as a convincing lo-fi, digital delay with long LFO sweeps providing slow decimation and filtering which helped create dense digital atmospheres from drone-like inputs.

In short, I am impressed. What seems like a simple trio of unrelated effects can combine in many interesting ways. It is by no means a standard filter, delay or bit-crusher, and you probably shouldn’t buy it as any of those, but together it becomes something else. At this price, it’s perhaps not an instant buy, but if you’re looking for something a little different, flexible, and unique, the Prism should be on your radar.