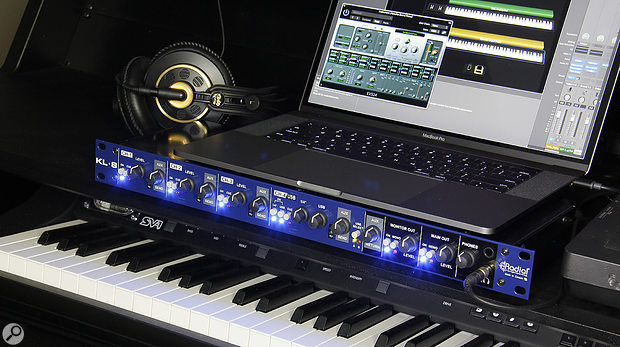 Back in January 2018, Bob Thomas reviewed — with high praise — a clever little keyboard mixer/interface pedal from Radial Engineering called the Key Largo. As a keyboard player myself I rather liked the concept, but the floor-pedal format didn't appeal so I was overjoyed when Radial announced an enhanced rackmount version at the 2018 NAMM show. We've had to wait a full year for the product to become a reality, but I'm delighted to report that sat in front of me now is the new KL‑8.

Built into a 1U-high, black-painted chassis with a striking blue front panel, the new KL‑8 extends almost 160mm (6.25 inches) behind the rack ears and weighs a substantial 3kg (6.6lbs), largely due to Radial's traditional heavy-duty steel chassis construction. The product name references both the original Key Largo and the fact that this unit has eight instrument inputs (four stereo pairs) instead of its sister model's six.

There are a few other differences too, which start with its universal (100-240V AC) switch-mode line-lump power supply. Although this is still external, it is more sophisticated than the Key Largo's. It delivers a trio of ±15V and +5V power rails (the Key Largo uses a single +15V supply), and connects using a reassuringly secure, latching four-pin XLR. There is no power switch, so if it's plugged in, it's on.

Importantly, the mains safety earth is carried through to the rack chassis and all of the instrument inputs are referenced to it directly, so any Class-2 (double-insulated) instruments can be assured of a solid ground reference via the KL‑8. Sensibly, ground-lift buttons are provided on both the main and monitor outputs to help solve ground-loop problems with destination equipment, should they arise.

The back panel is awash with closely packed connectors, starting with eight unbalanced quarter-inch TS sockets for the stereo keyboard inputs; plugging a mono instrument into a left-channel socket provides a dual-mono signal into the stereo mix bus. Four more TS sockets provide a stereo auxiliary effects loop with separate left/right sends and returns, and again there's some clever cross-linking between the sockets so that a mono effects pedal can be plugged into the left send and return to receive a mono‑summed aux output and deliver a dual-mono return. A pair of TRS sockets provides a stereo mix-bus insert send/return (normalled to maintain the signal path when nothing is plugged in), and is intended for use with a stereo volume pedal or an overall effects processor.

Both the main and monitoring outputs are presented on male XLRs, each pair with an independent ground-lift button as mentioned above. Slotted in between these are two further TRS sockets which provide direct mix-bus access so that multiple KL‑8s can be linked together for larger rigs, and two more TS sockets on the left-hand side accept remote footswitch connections to toggle between the two USB inputs (see below) and to mute the auxiliary send/return signal path.

Finally, there's the XLR4 power inlet, a couple of Type-B USB 2.0 sockets, a Live/Rec mode button (more on that later), and two five-pin DIN MIDI sockets for passing data in and out of the computer over USB (nothing in the KL‑8 can be MIDI controlled, so these sockets are redundant if a computer is not connected). Although only one of the USB sockets can be active at a time, this dual-socket arrangement allows main and reserve computers to be connected simultaneously and selected at the press of a button (or footswitch) with a virtually instantaneous change-over — another reassuring facility for professional live-performance applications. All standard sample rates to 192kHz are supported.

The Live/Rec mode button reconfigures the unit's signal, with the default Live mode bringing the USB replay signal in as a standard replay source alongside the instrument inputs. The stereo mix bus (post the stereo insert point) is also routed out to the computer so that the entire performance (including any virtual instruments) can be recorded.

In contrast, switching to the Rec mode brings the USB replay signal back into the main and monitor output section (post insert point), bypassing the mix bus completely. In this way a stereo mix of analogue instruments (plus the aux return signal) is sent to the computer for recording, while replays from the computer appear only on the main and monitoring outputs. This configuration thus makes it possible to play along to a backing track while recording clean keyboard parts, which is handy.

Moving around to the front panel, the suite of controls completely fills the available panel space, but the layout is clear and logical, with crisp white legends easily visible on the blue background. Status LEDs accompany every button, too, with dazzlingly bright blue Channel On lights.

The first three instrument channels are equipped with a rotary input attenuator, an On button to route the signal to the main output, a Cue button (which takes the signal off the main mix bus and sends it instead to the headphones), and a pair of red/green LEDs to indicate signal levels (green above -18dBu and red at +18dBu). A second rotary control for each channel sets the aux send level, which is derived from the mix bus contribution (so disappears if the Cue button is pressed).

Unity gain from input to output is achieved with the channel input and main output controls both at the 2 o'clock position. There is +10dB of additional gain available above that for the input control, and +8dB for the output control, so sources can be boosted by up to 18dB, if required.

Radial state that the maximum instrument input level is +18dBu, but I found the KL‑8 was still singing fairly nicely at a massive +20dBu — not that any normal keyboard is likely to be putting out that kind of signal! Conversely, the minimum input level required to achieve a nominal +4dBu line level at the balanced outputs is -14dBu (achieved with both the input and output controls at maximum). Obviously, lower source levels result in a lower output level, but the noise floor is sufficiently low to accommodate quieter instruments without significant problems.

Instrument input four also has its own input attenuator, but alongside is a rotary level control for adjusting the signal from the internal USB interface. Both sources have independent On buttons to route them into the main mix and both can be used simultaneously, but they share a Cue button, dual-LED meter and aux Send control. Also in this section is a button (with status LEDs) to toggle between the USB inputs.