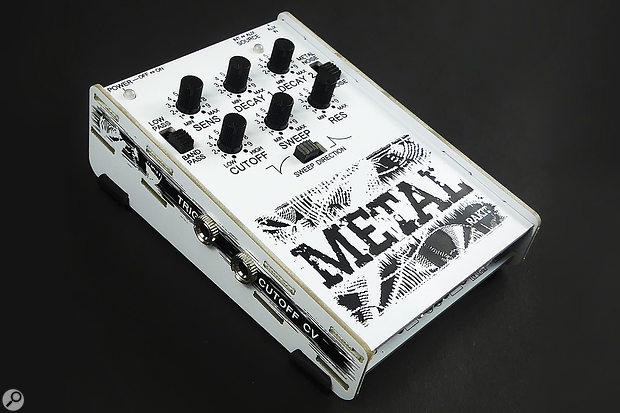 Need percussive noise on a budget? Look no further...

In 2017, Rakit released the analogue Drum Synth, which could be bought in kit or manufactured forms. Based upon the Amdek PCK100, this proved to be popular amongst kit enthusiasts without ever breaking into the mainstream. Today, the company have added a companion unit, the Metal Synth, which promises to add the sounds of hi-hats and cymbals as well as other pitched and unpitched percussion sounds to the analogue kicks, snares and toms available from the Drum Synth.

Like the Drum Synth, the Metal Synth eschews the steel or aluminium cases of traditional devices and is built from cut and printed circuit board with four rubber feet to protect your desktop. This means that, like its predecessor, it won't stand rough treatment. If you take a quick glance at the panels of the two models they look almost identical, with only the logos above their touch-sensitive pads being different, but a closer look reveals that many of the Metal Synth's controls have changed; this isn't a Drum Synth with a modified sound generator, it's a completely different instrument.

Once it's powered up using a suitable 9V PSU or a PP3 battery (connected using the supplied adaptor cable), you obtain a sound from the Metal Synth by tapping the touchpad or by applying a suitable signal to the trigger input found on the side of the unit. Whichever you use, this triggers an AD/D contour generator with a slightly squelchy attack, and two overlapping decays: a short‑duration, higher‑amplitude decay for the body of the sound, and a longer‑duration, lower‑amplitude one for an extended tail. (In the block diagram in the manual, these are described as Attack1 and Attack2, but that's an error — the annotation on the unit itself is correct.)

The contour sweeps the cutoff frequency of a dual-mode (low-pass and band-pass) filter that's based upon the increasingly popular Polivoks architecture. You can determine the initial cutoff frequency and resonance using the appropriate controls on the top panel and then apply normal or inverted sweeps with the depth determined by the Sweep control. You can also control the cutoff frequency using external sources directed to the cutoff CV input on the side of the unit, with the gain of the incoming signal controlled using the CV Level trimmer at the front. Like its inspiration, the filter itself is raw and aggressive, and it will oscillate at high resonance settings.

Notwithstanding the oscillating filter, there are two primary sound sources in the Metal Synth — digitally generated white noise and a set of preset enharmonic partials designed to create metallic sounds. You can select either noise alone or metal+noise to be processed by the filter. You can also process external audio directed to the aux in socket found on the rear of the unit. Whichever you choose, the sound passes first through the filter and then through a VCA, the gain of which is also controlled by the AD/D contour. Another trimmer on the front of the unit then provides control over the volume before the signal reaches the output on the right of the unit.

I was able to obtain a surprising range of sounds from the noise and metal+noise sources, ranging from believable hi-hats to all manner of electronic drums, thumps, bleeps, splats and other effects. But the real fun started when I hooked it up to the step sequencer in my Roland SH‑101 and began creating patterns ranging from traditional drum loops to hi-hat phrases to footsteps to industrial machine noises. I then defeated the noise and metal sources by switching the audio source to the external input and inserting nothing into the socket, thus allowing me to use the self-oscillating filter in isolation to create the usual range of effects and Star Wars laser sounds. With careful adjustment of the CV Level trimmer, I was even able to make the Metal Synth track the incoming CV chromatically, which meant that I could play tunes on the oscillating filter.

While experimenting, I found that — as on the Drum Synth — the level of the trigger signal can affect the sound, which adds another level of expression. Also, if you set it up appropriately and play notes quickly (ie. before the decays of previous sounds have ended) the maximum frequency of the next sweep is slightly higher because the new contour is being built upon the residual of the previous. This mimics the response of the Minimoog's contours and makes the Metal Synth more expressive when you play a mixture of slow and rapid phrases.

One could build a powerful analogue drum synthesizer with a handful of Drum Synths and Metal Synths, and I hope that someone will do so because I would be keen to hear the results. Unfortunately, the positions of their sockets mean that you can't place the units immediately side-by-side, but that's not an insurmountable problem.

Throughout my tests, I was disappointed with just one aspect of the Metal Synth; you can't shift or sweep the frequencies of the enharmonic partials to create a wider range of metallic sounds. The fixed frequencies are well chosen, but the unit would be more flexible if they could be altered. Despite that, the Metal Synth is an interesting percussion generator, and it deserves to find favour among those interested in analogue percussion and noise-based music. For the future, I would suggest that Rakit consider re-engineering it (and, for that matter, the Drum Synth) as a Eurorack module, because that would bring it into the mainstream to find the wider audience that it deserves.

It's raw, flexible, and fun. If low-cost percussion synthesis is your thing, check it out.