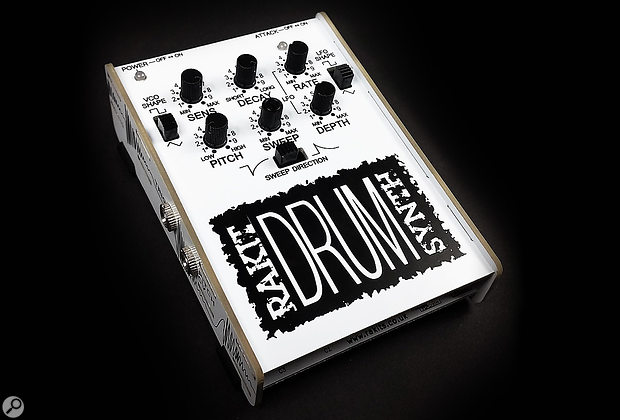 Small company Rakit are making a big noise with their new drum synth.

There has been an explosion in the number of boutique manufacturers over the past few years, with the majority building Eurorack modules — some innovative, many not. But not all small manufacturers build such modules, and not all who take their inspiration from the past base their products on designs from Moog, Korg, EMS and other famous names. Consequently, I was fascinated to learn of Rakit, a husband and wife team who have been supplying low-cost synth kits for years without ever becoming visible on the radar of the typical Sound On Sound reader. But I suspect that that might change with advent of the Drum Synth, which is available in both kit and finished forms.

We can’t start without noting the Drum Synth’s unusual construction. Eschewing the steel or aluminium cases of most devices this size, it’s built from the same resinous material as the circuit board itself, with four small rubber feet to protect the surface on which it’s sitting. Be in no doubt, this is not a stompbox, and it won’t survive a carelessly applied left boot. Furthermore, the single circuit board is exposed but, because there’s no mains voltage anywhere (the unit runs off a PP3 battery or a 9VDC adaptor), Rakit seem comfortable that this poses no risk to the unit or the user. It offers two 3.5mm inputs: a trigger that responds to pulses in the range +500mV to +10V, and an uncalibrated pitch CV that affects the oscillator pitch and therefore acts as an envelope follower when audio signals rather than CVs are applied. The only output is line-level audio, again using a 3.5mm socket.

Based upon a modified Amdek PCK100 (the kit version of the Boss PC2 Percussion Synthesizer), the Drum Synth has been redesigned to use modern components but offers the same controls as its predecessors: trigger sensitivity, VCA decay length, oscillator pitch (from 30Hz to 3.5kHz) and pitch sweep, plus the rate and depth of the LFO that provides pitch modulation. However, due to its diminutive size, there are no knob heads. Instead, Rakit have chosen pots with knurled shafts and a small cutout to show the position. To the left of these, you’ll find a switch to select between triangle or pulse audio waveforms (which was a documented modification for the Amdek) and to the right you’ll find a switch to select between triangle or pulse LFO waveforms.

Two trimmers under the control panel fine-tune the peak output from the VCA and ensure that it closes to silence at the end of its Decay. You should never need to touch these but, if you want the Drum Synth to act as a drone or special effects generator, you can increase the VCA Trim until the unit never shuts up, and it will then burble away happily and create some interesting effects. The final controls are on the rear: a power on/off switch, and a switch labelled Attack on/off. This is another Amdek modification and, when on, adds a small amount of the trigger impulse to the audio path to create an accent.

Although the Drum Synth lacks the visible trigger pad of the Amdek and Boss units, it’s there under the Rakit Drum Synth graphic. Don’t take a drumstick to this; you can to do so when playing the Boss and Amdek pads, but the much lighter construction of the Rakit wouldn’t survive it.

If you twiddle its knobs indeterminately, you’ll obtain sound effects reminiscent of early video games. Defeating the LFO for a moment will lead you to the electro-drum sounds of the late ’70s, while more careful programming will lead to a useful range of kicks and toms. You can also generate a range of clangourous and woody sounds using audio-rate FM (the LFO reaches as high as 400Hz) but the unit can’t generate snares, hi-hats or cymbals. Nonetheless, half a dozen Drum Synths driven by a sequencer would be fun, especially since the loudness is dependent upon the trigger voltage, meaning that you can add expression to the resulting patterns. You can also use external audio signals as triggers to obtain sync’ed percussion or, with the VCA trim turned up full, interesting sync’ed effects. With a bunch of effects units to process the resulting sounds, things could get very interesting. 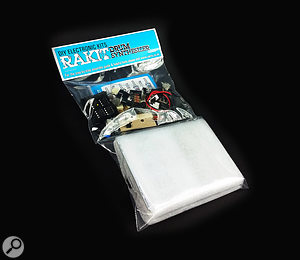 The Drum Synth is also available in kit form. I have a handful of minor criticisms regarding the pre-production unit that I reviewed. Firstly, the sweep direction switch was wired so that the ‘up’ position swept down, and vice versa. Rakit have since reassured me that all subsequent units respond correctly, so I think that we can let this go. Secondly, the duty cycle of the LFO pulse wave is around 1/3 at its slowest settings, although pretty much square for the rest of the range. Moving on, the maximum Decay time of 3.5s may be a little short for your taste. Next, the polarity of the 9V input isn’t labelled, so you’ll need to be careful if you use an AC/DC converter to power it. Finally, and for obvious reasons, it would be more sensible if the connections were on the rear. Other than that, everything was clear, straightforward, and worked exactly as promised.

I must admit that I found the Drum Synth to be great fun, so I had a peek at the second-hand market to see what prices the Amdek and the Boss units are now commanding. I was gobsmacked. I saw PCK100s selling for between £160 to £180, and PC2s from £150 to £299. These prices are insane, and put the price of the Rakit Drum Synth into perspective; all the facilities of a modified PCK100 for £65 might interest a lot of people. Apparently, Rakit are also looking to develop a companion unit based upon a noise source rather than an oscillator, and this should be capable of generating those missing snares, hi-hats and cymbals. When this appears, we might be able to say, “Hello Rakit... welcome to the mainstream.”

Is it merely an executive toy or a serious music-making device? Probably both in equal measure, but I can see prospective synth DIY-ers learning a lot from buying the kit and building one of these, while those of us whose soldering looks like an accident in a cow field will derive great fun from the constructed version. Just ensure that no-one ever smacks yours with a drum stick, or you could end up with more parts than you had when you started.