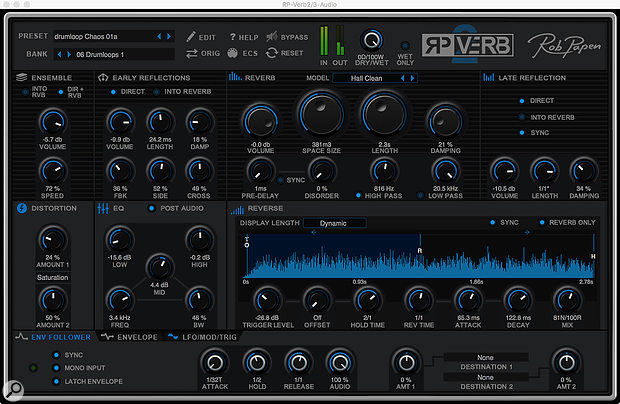 Sound designer Rob Papen and his team of software experts have a reputation for producing excellent, highly tweakable virtual synthesizers, including the widely used Predator 2 and the now sadly discontinued Albino 3. Many producers and studio engineers also swear by his quirky RP-Verb plug-in, originally released back in 2009. Now, eight years on, it has received a comprehensive overhaul.

Straight from the off, RP-Verb 2 looks as mean, alien and sleek as the sounds it produces. The GUI has been vastly improved, with all of the major controls visible at all times. Gone are the retro-looking skeuomorphic dials of version 1, which have been replaced with something more akin to the interior of a modern sports car, with the new Reverse section right in the middle.

RP-Verb’s default routing begins with an equaliser based on the same developer’s RP-EQ algorithm. This provides low and high shelves at 80Hz and 12kHz respectively, with a parametric mid band that can be placed anywhere between 20Hz and 20.5kHz, with adjustable bandwidth. A Post Audio button enables the EQ to be used at the end of the signal chain rather than at the start.

Next up is a slightly unusual (for a reverb) section labelled Distortion. There are two layers of distortion, and RP-Verb 2 offers more control over the distortion than its predecessor. Whereas as before there was only a single dial to set the amount of distortion, there are now four different types available: Foldover, Fuzz, Power and Saturation. Distortion is best used on drums, where some extra bite can be imparted to the room sound, but the additional harmonic content it generates can also be employed to good effect on synths or vocals.

The Ensemble section, providing a six-voice chorus effect, was another great feature of version 1; in version 2, it also sports a Speed dial to give further control over the sound. The Ensemble effect can be sent just into the reverb section, or to both the output and the reverb stage.

Early reflections are handled next, and these too can be sent directly to the output or into the reverb section for further processing. Available controls include Volume, Length, Damping, Feedback, Side (feedback) and Cross (also feedback). With more extreme settings for the last three controls, plus short Length settings, bizarre delay, chorusing and flanging effects can be produced, making it easy to generate metallic, futuristic or simply out-of-this-world sounds. There’s also a Late Reflections section; this has just three dials, for Volume, Length and Damping, but can be sync’ed to host tempo for more rhythmical reverb sounds.

The main reverb section itself offers a variety of unique ‘spaces’, which have been overhauled in version 2 using Rob Papen’s in-house RPCX algorithm. These spaces are Hall Clean, Hall Warm, Room Cold, Room Edged, (the brand new) Room Storm, Vintage Types 1 and 2, and Space Orbits 1 and 2. While none of these are going to replicate the warmer reverbs of some vintage units, that’s not really the point of this plug-in: RP-Verb 2 is at its best when its extensive modulation and sync’ing options are let loose. Control-wise, the usual suspects are available, including Volume, Size, Length, Damping, High Pass and Low Pass, but things get more interesting with the Pre-Delay, which can again be sync’ed to a host tempo, as well as the Disorder dial, which affects how the early reflections in the ‘space’ build up. To imagine how this Disorder control works, see it as filling a room with more and more furniture or oddly shaped objects until the way the sound bounces around the room becomes less and less predictable.

Now for the standout feature: Reverse. While reversing reverb tails is nothing new, never has it been so intuitively implemented into an already very creative reverb plug-in. The reversed effects work best when tempo sync’ed, though timing can be set in milliseconds too. For example, the simplest way to enable the effect is to have the reverb sound recorded for, say one bar, then played back in reverse on the next bar. The amount of time between the recording phase and the playback phase can, of course, be made shorter or longer, and the user has full control over trigger levels, trigger offsets and the attack and decay of the reversed effect. A separate Mix control enables the blending of the normal and the reversed sounds.

Finally, as if all that wasn’t enough already, at the bottom of the interface there’s a mammoth amount of modulation controls in the form of an envelope follower (useful for gated sounds), an envelope and an LFO, along with a modulation matrix for mapping the modulation sources to virtually any of the plug-in’s dials. Additionally, there are plenty of tempo-sync’ed and MIDI-based options for even more control over RP-Verb 2’s parameters. For sound designers, it’s practically a dream come true.

Overall, Rob Papen’s new reverb plug-in combines some fantastic digital algorithms and a microscopic level of control with top-notch routing and sync’ing options to make it easy to create otherworldly reverb sounds. The GUI has been improved since the first version too, ensuring that most dials are always on screen. As a result, RP-Verb 2 is great for sound designers and musicians looking to explore interesting textures and futuristic soundscapes. It’s not for the faint of heart, given the amount of control options available, but there are hundreds of top-tier presets available for both beginners and more seasoned pros wanting a launchpad for their own ideas.

If you’re looking for a quirky reverb plug-in that appeals to the sound designer in you, other contenders include 2CAudio’s more expensive but superb self-modulating algorithmic unit Aether, and its stripped-down little brother Breeze.

If you’re in the market for a reverb plug-in that’s a little bit special, and which is equally capable of producing everything from subtle background layers to chaotic, modulating slabs of sound, look no further. The first much-loved RP-Verb was a marvel at the time of its release in 2009, and version 2 adds some neat tricks of its own to improve on an already excellent package.