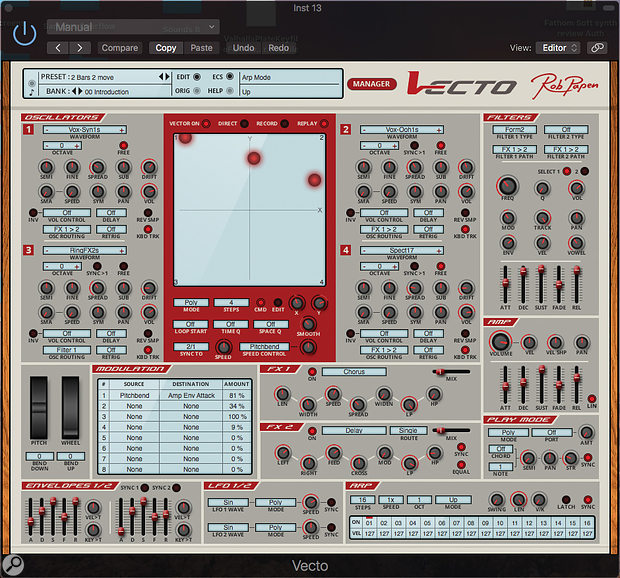 Rob Papen's versatile Rack Extension vector synth has been reborn as a plug-in.

Now available in all the common Mac and Windows plug-in variants, including AAX, VST and Audio Units, Vecto was originally created as a Rack Extension for Propellerhead's Reason, but after much pleading from end users, Rob Papen finally relented and created this platform-agnostic version. For those unfamiliar with the instrument, Vecto is a four-oscillator vector synthesizer in which the contribution of the four oscillators is controlled by an X/Y vector pad and other modulation sources, enabling moving, evolving or rhythmic sound textures to be created.

The oscillators can be populated from a long list of waves (Additive, Analogue and Spectrum) or samples which, in combination with the modulation options and a range of preset vector paths, make it easy to create ambient soundscapes, pads and string machine type sounds. The sample sets include 'big samples', which are multisamples with keyboard splits, and there are also some special‑effect sounds. There's no option to import your own samples, though I keep trying to persuade Rob to at least let users add their own wav files to be used as samples.

Further processing is available using two filters, these offering a choice of 28 filter types. There are also two effects sections, which can be loaded from a range of effect types and, this being a Rob Papen product, you won't be surprised to learn that it also includes an arpeggiator. To get things rolling there's a huge preset library containing over 1000 presets divided into categories, and it is easy to make changes to them which can then be stored as user patches — or you can dive in and build your own sounds from scratch.

Most of what happens in this instrument is covered by a single window, where the four oscillators and their controls are placed either side of the red-framed vector pad. A 'round the back' page is accessible for certain setup and MIDI functions. Each oscillator has its own modulation source controlling its level, including X/Y position in the vector pad, LFOs, envelopes or CV input. An Invert (Inv) button inverts the modulation signal so that as the control signal increases, the oscillator level is reduced. Routing options then send the oscillator outputs to the filters, modulation effects, delay effects or even to other oscillators for creating FM sounds.

If you get the job writing the sound track to the next Blade Runner instalment, this would be a good synth to have in your arsenal.

The X/Y vector controls the dynamic mix between the oscillators, which is how evolving sounds are set up, though the X/Y position may also be used as a modulator source. The red dot can be moved manually in Direct Mode but it is also possible to use the Record/Replay Mode to recreate manual moves you wish to repeat. Replay is normally at the original speed but there are also various sync options, or the option to choose a new multiple for the path replay speed.

The path is indicated by a number of small dots and transition lines, and it is possible to modify the path by dragging the dots to a new location. A number of preset path shapes are included and are selected using the Command Menu. A Free mode leaves the X/Y path running, such that all the notes share the same X/Y path and the X/Y path is always looped; the patch is not affected by new notes being played. In Mono mode the X/Y path is reset at each key press. More regimented effects are available by selecting the number of steps, and the Steps control sets the number of points in the X/Y path. The choices are four, eight, 16 or 32 steps, and when set to Single, every new note starts from the same path position. Time quantisation can be employed to make the transitions more rhythmical; Space Quantisation can also be used to snap the path points to a grid. If the transitions are too abrupt, then a smoothing option is also available. There are too many vector control options to list here, so however you want your oscillator mix to vary, the chances are that your needs have been catered for.

Below the X/Y vector pad is the modulation section, where the user can select source, destination and amount for each parameter. The two effects sections, offering reverb, delay and mod effects, reside to the immediate right, with the filters, amplitude envelope and play mode selection panes arranged down the right of the screen. Along the bottom of the window are two sync'able ADSFR envelope generators, two sync'able LFOs and the arpeggiator, which can of course be sync'ed to the host tempo. The user can select the number of steps, the speed of the arpeggio sequence, the octave range and the arpeggiation mode, as well as adding swing and controlling the step length. Note that if a control is not applicable because of other settings or choices, it is greyed out.

Sonically some of the sounds get very close to their analogue counterparts, and if you get the job writing the sound track to the next Blade Runner instalment, this would be a good synth to have in your arsenal. However, it also manages organic‑sounding chimes, woody resonant plucks, synth strings, rhythmic elements, drones, choirs, sci-fi swirls and scary spot effects. Sometimes there's a hint of Wavestation about the sounds, at other times it sounds like a retro analogue monster or a super‑smooth FM synth. Certainly there's a lot to like and I found myself starting a new composition before I'd even got past the second preset.

If you already have Rob Papen's 'all you can eat' Explorer bundle then Vecto will be added to it automatically, but it can also be purchased as a separate plug-in for less than the price of a decent fuzz box.

Vecto is an affordable and flexible synth that covers a lot of ground without getting too complicated.