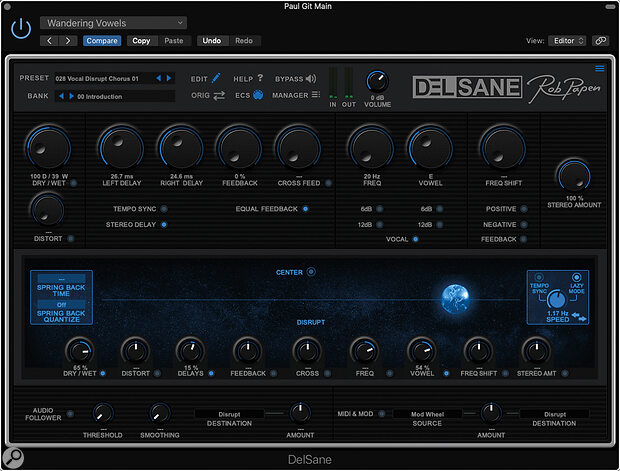 If you prefer delays that are a little more ‘out there’, this one is aimed at you.

DelSane isn’t Rob Papen’s first foray into the world of delay plug‑ins, but this time he wanted to create something a little different. It combines a smooth‑sounding mono/stereo tape‑style delay with modulators and effects that allow the user to take the delays in a new direction. There are various useful features, some of which are intended to make life easier, while others ensure that whatever else your delay effect is, it won’t be static or boring. For example, an Equal Feedback function keeps the stereo delay tails sounding evenly balanced, even when you’ve set very different delay times. There’s also adjustable distortion to add more than a little analogue grit. Nothing too ‘out there’ so far, you might think, but there’s also plenty of weirdness to explore, courtesy of frequency shifting, vowel filtering and various options for modulating DelSane’s parameters.

All of the familiar delay controls are arranged across the top of the GUI, along with additional controls for HP/LP filtering. These filters, which sit in the feedback path, are transformed into variable Vowel and Frequency controls for the vowel filter when the Vocal mode is engaged.

As you’d expect, the main Dry/Wet mix knob adjusts the blend of delayed and dry signals, but there’s also a Wet Only button for when you want to use DelSane as a send effect. The length of the left and right delays can be set separately with tempo‑sync options, Feedback sets how much of the Delay output is fed back into the Delay input to create multiple repeats, and Cross Feed adds feedback between the left/right Delays — as long as the aforementioned Equal Feedback feature is turned off. When Equal Feedback is on, the feedback for the left and right delay is set independently and automatically, so that the repeats decay to zero over the same period. It’s a neat feature and one that I haven’t seen elsewhere.

Further knobs control Frequency Shift and Distort effects, and an innocent‑looking Rectify button performs a full‑wave rectification of the delayed signal, which adds some interesting and very distinctive harmonics and overtones. Frequency Shifting is very different from conventional pitch‑shifting in that the results don’t follow music intervals. The shifter’s range is a generous ±5kHz, though in practice low values tend to sound best unless you are after a ring‑modulator type of sound. The Frequency Shifter can be placed either in the feedback path, in which case further shifts are added each time the signal recirculates, or after the delay, to add a constant frequency shift to the overall delayed sound. Stereo Amount essentially sets the stereo width of the delay and can go right down to mono if required. Clicking on the DelSane logo takes you to a virtual rear panel, where you’ll find more global settings.

The brightly coloured Sphere Slider, which is the first thing you notice when you look at the GUI, makes things more interesting still: it can be linked to the various Delay parameters, so that you can change multiple values smoothly and simultaneously. It’s more than a simple multi‑parameter controller, though. A handy Spring Back feature moves the Sphere back to the centre position. Its movement can be sync’ed to the project tempo, and you’re also given the option of moving the fader in quantised steps. A so‑called Lazy Mode allows the Sphere Slider’s movement to be automated if you prefer, to create regular modulation effects that encompass Flanging and Chorus and beyond. The Sphere Slider can also be made to move using a mouse, of course.

Now we get to the really fun part: the Sphere Slide’s Disrupt section. The knobs in this section determine whether and to what extent the Sphere Slider will modulate the corresponding parameters in the GUI’s main upper section. So the Slider can be used to apply anything from very gentle to utterly radical changes. The Disruption Amount modulation controls incorporate blue ‘value’ rings, that move to indicate when modulation is taking place. In Lazy mode, the fader movement is automated for you and can be linked to the DAW’s project tempo. This is an ideal mode for creating more conventional modulation effects, but it can also be very effective in having the delay repeats coloured by a moving vowel filter, for example. Arrow buttons set the movement of the slider (left to right, right to left or back and forth).

Further modulation options are shown at the bottom of the GUI. An Audio Follower uses the level of the input signal as a control source for various delay parameters: a Threshold control sets the level at which the Audio Follower takes effect, while the Smooth knob irons out level changes that might be too abrupt and which would otherwise cause clicks or other audible nasties. The Audio Follower can also be used to modulate the Disrupt section’s controls.

A MIDI and Mod control section may also be used to control various parameters, so you can expect to hear effects that are anything but static! There are actually quite a lot of MIDI options, and these can be saved in the presets section. DelSane’s parameters can respond dynamically to MIDI Messages, their assignments being stored in the External Controller Setup (ECS). The ECS button allows you to load and save the entire external MIDI controller setup. Once set, it is used by all Presets, and by all instances of DelSane currently loaded into your DAW. (Note that Logic users will need to load the MIDI Controlled Effect version of DelSane into an instrument track and then feed audio to its side‑chain input.)

This all adds up to give you plenty of scope for automating or modulating both the usual delay parameters and the creative additions, such as vowel filtering and frequency shifting.

This all adds up to give you plenty of scope for automating or modulating both the usual delay parameters and the creative additions, such as vowel filtering and frequency shifting. But what kind of effects can you expect once you’ve exhausted all the conventional delay options?

One of my favourite features is the vowel filter. If you modulate that to sweep through the vowel sounds, the delays seem to take on a quasi‑speech‑like character. And as the Frequency control adjusts the frequency of the filter peaks, you can make this anything from fairly warm in character to brightly aggressive. Whether gliding smoothly or jumping in quantised steps, the effect is distinctive and it works well on a wide range of sound sources. Switching to the more conventional filters also allows for the general timbre of the delays to be modulated, which is another useful, organic‑sounding effect.

That Frequency Shift parameter is also capable of some really interesting results, though it does have to be used with care. If set to just a few cents, with the shifter inserted in the feedback path, you’ll hear a subtle Doppler‑like effect, as the delays either rise or fall in pitch as they decay, which can be a nice effect. At higher settings, things sound much more aggressive, eventually becoming reminiscent of ring‑modulation.

EDM composers will probably embrace the extremes of this plug‑in more than me, especially with the tempo sync’ing, but really there’s something for everyone here, and there are loads of presets that show off the possibilities. And if you want to get into MIDI parameter control you are well catered for in that department too.

In conclusion, this really is a very versatile delay plug‑in, capable of traditional tape‑delay effects at one end of the scale and anarchic fun at the other. Well worth exploring.

With a range of interesting effects and modulation options, this is not your average tape delay!