Q. Why is the sound from a keyboard mixer so weak when plugged into a DI box? 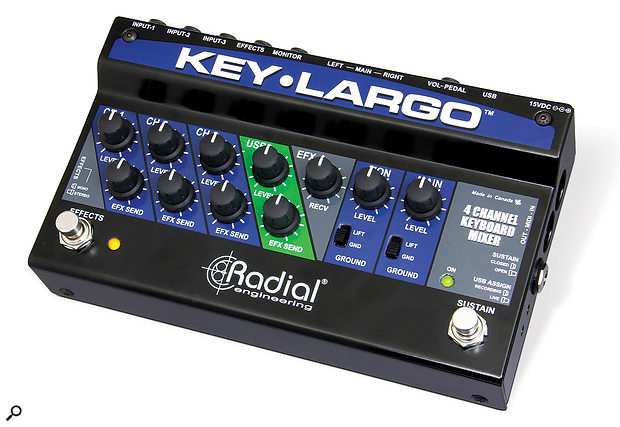 A transformer-balanced line-level output, such as from the Radial Key Largo, will lose signal if a TRS cable is fed into a DI box's unbalanced input. One solution is to pad down the line output and feed it directly to the FOH console's mic inputs.

I recently played a gig where I had a terrible sound and I don't understand why. I have tried to build a bullet-proof setup comprising a TR8, Bass Station 2, Peak and a computer all connected through a Radial Key Largo mixer. My mixed stereo output is taken directly from the Largo's balanced XLRs via XLR(f) to quarter-inch TRS jack cables. In the past I have plugged these directly into the PA's mixing-desk line inputs and had no issues at all. At the gig in question — a venue that has great sound — everyone else's sound was top-notch, but when I came to play it was truly awful! There was no bottom end and no mids, just a truly horrible top end. The PA operator said it was my gear, as everyone else's was fine, and I went home dejected. But when I checked the gear at home by plugging into my little Soundcraft mixer everything was spot-on.

The PA guys had plugged the outputs of the Key Largo into a DI box rather than straight into the desk, but surely this could not have been an issue? I would really appreciate any feedback on what could have gone wrong as this has seriously dented my desire to do this again, and the whole point of investing as I have done in my rig was so I wouldn't get these kinds of issues.

SOS Technical Editor Hugh Robjohns replies: I strongly suspect there's nothing wrong with your gear, and that the PA operator has fallen foul of not recognising the technical requirements of good old-fashioned output transformers! Radial use high-quality transformers in the Key Largo's main outputs for good, old-school engineering reasons, but they're not quite idiot-proof for use in all circumstances — as your PA chap has proved!

Your description of the resulting sound character, combined with the type of cable you used and the mention of being connected via DI boxes strongly implies a major connection issue. The only detail you left out (which you wouldn't know but I'll bet the PA guy did) was that he would have been running his mic preamps almost flat out to get anything at all! 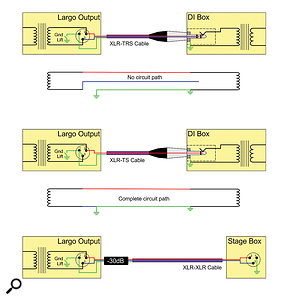 The problem was that you provided a 'floating' transformer-balanced signal on a TRS plug, and the PA guy plugged that into a DI box which expects an unbalanced, ground-referenced signal. Inside the DI box, the input socket was wired to receive a signal between the tip and sleeve connections, and the ring contact would have been left unterminated. That would mean that while the 'hot' side of the Largo's output transformer was connected to the DI box's input, the 'cold' side went nowhere at all, so there was no complete circuit path for the Largo's audio output. Instead, the only signal that would get through at all would have been from stray capacitive coupling, which has that very distinctive thin and feeble sound character: very low level, all top end, and nothing much else. Fundamentally, the PA operator didn't recognise the implications of connecting a balanced source to an unbalanced DI Box — alarm bells should have been ringing as he plugged a TRS connector into a DI box!

You provided a 'floating' transformer-balanced signal on a TRS plug, and the PA guy plugged that into a DI box, which expects an unbalanced, ground-referenced signal.

It's quite common to use DI boxes to connect line sources on stage, of course, with two primary reasons. The first is practical: it's often easier to connect everything to the desk's mic inputs, and a DI box converts line-level to mic-level. The second is for safety: to provide galvanic (electrical) isolation between source and FOH (Front Of House) by using an audio transformer to guard against potential electrical fault damage. Of course, in your case the latter is not required because the Key Largo's transformer outputs provide galvanic isolation anyway; that's partly why they are there!

However, the need to feed the PA mixer's mic-level inputs will be a very common one when performing on stage, so you'll need to have the means in your 'bag of useful bits' to deal with this situation when it arises again. There are basically two options. My preferred one would be to attenuate the Largo's balanced line-level outputs to provide a balanced mic-level feed that can be plugged straight into the PA console's mic inputs. I always thought it was a bit of a missed opportunity that Radial didn't provide a built-in output attenuator in the Key Largo and KL8 interfaces, but as they didn't you'll need to purchase a couple of inline XLR attenuators (30dB is the usual value for this kind of application). You can plug them directly into the Largo's output XLRs, and then run standard mic cables from there to the stage box.

The alternative option, where the PA people insist on using DI boxes, would be to deliberately unbalance the Largo's line outputs so they will work properly! That's easily done with an adaptor or unbalancing cable, with an XLR(f) connector at the Largo end, and a mono TS jack plug at the DI box end. These are wired with the 'cold' side of the balanced output connected to the screen/ground, which completes the transformer's circuit path when feeding an unbalanced destination.