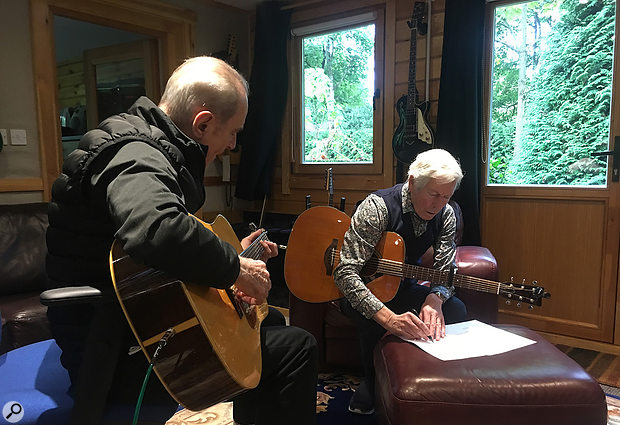 Francis Rossi and Andrew Bown writing for Backbone, which you can hear at https://statusquo.lnk.to/Backbone.

There can't be many acts who've released as many albums as Status Quo. I recently had the privilege of working on their 33rd studio album, Backbone. Shortly before embarking on the project, I'd taken over the reins in the Quo camp from Grammy award-winning engineer Gregg Jackman, and as I'd already worked on the Francis Rossi & Hannah Rickard release 'We Talk Too Much' I had some experience of working with Rossi. But Backbone was to be forged in very different circumstances to previous Quo albums.

This would be the first record of original material to be released since long-time guitarist Rick Parfitt passed away in late 2016, and the first album to feature the newest band members, Leon Cave and Richie Malone. It was also the first Quo album that Rossi decided he'd produce solely by himself since 1991's Rock 'til You Drop, and from the outset he was determined to make it very differently from the Quo albums of the '90s and '00s. He wanted to make it on his own terms, rather than deliver something the band felt expected or obliged to — so when I say it was a privilege to be involved in this project, it's not just about the excitement of working with a big name; it was also a genuinely original, interesting and engaging project. 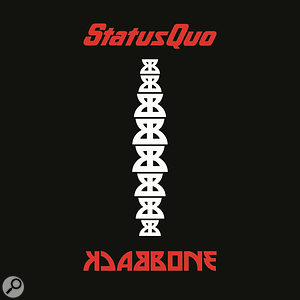 In this article, I'll take you through how we approached the Backbone sessions, explaining some of the decisions we made and techniques that we used along the way, and hopefully I'll be able to cover a few things that might be of benefit to your own productions.

Building On The Demos

We recorded, mixed and mastered the entire project at Rossi's home studio. It's obviously a little grander than what most SOS readers would think of as a 'home studio' — it comprises a live room, a green room, a vocal booth and a comfortable control room, with a Harrison 48:32 console at its heart — but it offered us a similar balance of pros and cons. The band would, of course, be able to record the final album in the studio, but they'd also have the luxury of time to work on developing the songwriting and making demos there too.

Over the years the studio has made the move from recording on ADAT machines to a Mackie HDR 24-track hard-disk recorder and then, eventually (on Jackman's arrival), to a computer-based setup based on Logic Pro X. I'm actually a dyed-in-the-wool Pro Tools user, but it was important that I use the in-house system for this production — thankfully though, I've used Logic many times over the years, which meant the switch to Logic wasn't too daunting. 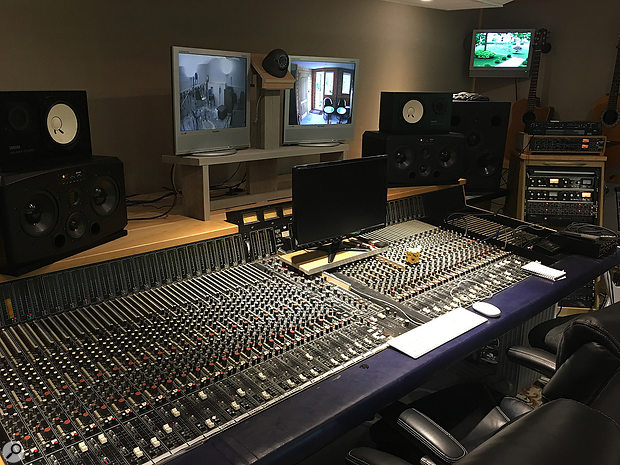 The Harrison console in Francis Rossi's home studio, with some of the other gear mentioned in this article in the rack to the right, including dbx 160 and Drawmer 1960 compressors.

The band started the demo sessions around February 2018 with a view to recording the album in the Autumn. We kept everything that Rossi and long-term collaborators Andrew Bown, John 'Rhino' Edwards and Bob Young sketched out during songwriting sessions, and we also imported drafts from band members who'd recorded things remotely, on various systems: Boss hardware recorders, Logic sessions, and even some voice memos.

This material formed the core of the album and was kept for reference in the working project right up until the final mix — in fact, a few of the 'demo' parts we'd recorded even made it onto the finished record. The idea of retaining the demo material throughout was that we could make sure we never lost sight of the energy in those original ideas — and I think it's fair to say this approach worked well.

One upshot of working with the demo material in these sessions in this way was that the drums were not the first thing we laid down, as they typically are in rock productions. Instead, we built the album recordings around the guides we'd created during the writing sessions, starting each song off by recording guide guitars from each writing partnership, and a guide vocal from Rossi.

Whether working on demos or the final product, I'm a firm believer in using studio time with the artist for recording; the engineer/producer should always be focused on capturing the energy of the performances, and things like editing, processing and comping can be done later at your own leisure. Rossi has a similar philosophy. Thankfully, it was also apparent from an early stage that Backbone was not going to be a project that would leave us with take upon take of material to sift through later— recording really was a case of getting down just one or two takes (three at most) that could be tidied up to appear as the final 'take' on the record.

Although I've just called them 'guide' vocals (since that was the intention), we rarely needed to redo any of these initial lead vocal parts, other than to drop in a word or two to accommodate the occasional lyrical tweak. At some stage, the lead vocal would be double tracked, to achieve the definitive Status Quo vocal sound — sometimes immediately after the initial take, sometimes after everything else had been laid down. Incidentally, it's fascinating to see just how exacting an artist is about their double tracking when they've spent a lifetime doing it! I often reach for Synchro Arts' Vocalign or Revoice Pro when dealing with multiple vocal tracks, but great as those tools are, for this album I happily left them unused on the lead parts.

We used an AKG C414 and a Neumann U87 set up in tandem, each running through a dbx 160 VCA compressor. On many 'classic' Quo records the vocals were tracked and double-tracked with a C414, a setup that persisted until Jackman encouraged Rossi to adopt the U87 in the '90s. Eager to see if the mic choice could help recreate a vintage sound, we kept both channels running for most of the early vocal takes, allowing us to compare the results later. As it turned out, the C414 wasn't as impressive as we'd anticipated — it sounded somewhat brighter, but it didn't really lend itself to this vocal. The U87 wasn't entirely what we wanted straight off the bat either — it offered something the C414 didn't, yet still seemed sort of 'muted'. To arrive at the desired sound, we EQ'ed the U87 to emulate the frequency response of the C414, which yielded a nice, full-bodied tone, with neutral mids and airy highs.

A theme of huge 'block vocals' developed very early on into the recording process, and this became part of the signature sound for the album. It was a case of quadruple-tracking a background part and then adding a fifth and an octave above that (again, quad tracked). These had to be super tight — unnatural even — to achieve the desired effect, so I made liberal use of Revoice Pro for this. (Prime examples of this sound can be heard on the tracks 'See You're In Some Trouble', 'Backing Off' and 'Falling Off The World'.)

The move away from the wall-of-guitars sound of some recent Quo records was deliberate. The idea was to get the sound to 'breathe' more, and so our approach involved capturing sounds with considerably less harmonic distortion, and again choosing not to track take upon take of the same part.

Many of the songs were constructed around riffs, but there's a signature sound to Quo which involves a guitar figure movement from playing a fifth and then a sixth and then back again — otherwise known as 'the finger'. It forms the rhythmic basis of the songs, so we chose to get these down at an early stage — other figures and parts could then be developed around them.

Rossi is an exceptional blues guitar player and rather than recording rehearsed ideas for the solos on this album, he preferred to jam them out to see what felt right. As with the vocals, it was a case of two to three takes before discussing whether he'd nailed the part and if it served the song. As a guitar player myself, I had to make a concerted effort to think as an engineer/producer, more in terms of the record and how the phrasing, articulation and tone of the solos sat in the song than I usually would as a player. Sometimes we'd fine-tune the parts (not as easy as you'd expect when it's all improvised like this!) or comp the solo out of the two or three takes we had on file. 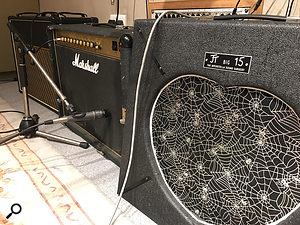 To capture Rossi's guitar sound, a Shure SM57 facing the centre of the cone of a Marshall JCM900 combo made the biggest contribution, but this was mixed with a more distant Neumann KM183 omni room mic set up at head height.We quickly got into a system of a three-channel recording setup for Rossi's parts, with a DI signal feeding a tailored AC30 emulation in Logic, and a dual-miked 60W Marshall JCM900 combo set up in the live room. A Shure SM57 was placed dead centre on one of the cones, and a Neumann KM183 omni small-diaphragm capacitor model placed six feet from the amp at head height, to give us a more neutral reading of the room — the omni pattern doesn't seem to exaggerate room modes as much cardioid mics tend to. The height was simply set to reflect what the listener would hear if stood in the room.

For the most part Rossi used his custom Status guitar. This is a solid alder body model, fitted with Hot Rail pickups and a bolt–on graphite neck, and featuring a variety of tonal controls. I confess that I had my doubts to begin with — but I'd soon find myself pleasantly surprised by this instrument's versatility. Depending on the material, I often like to use some form of physical noise control, such a Gruv FretWrap (string damper) when recording guitars, and something like this is essential when dealing with carbon-fibre models, which always seem to exaggerate sympathetic resonances.