Acoustic guitar only appears on the introduction to 'I See You're In Some Trouble'. We recorded 16 separate takes of this intro, with a U87 set to omni, a KM183 room mic and a DI fed from the guitar's piezo pickup. As the texture swelled, it became apparent that the DI tracks were inconsequential and the room mics needed to be used minimally.

Once I'd tidied the tracks up, panned and levelled them to taste, they were bounced as a stem and all the original tracks discarded from the Logic session. I'm all for keeping alternate takes and versions 'just in case', but when you have already have the sound you're after it makes no sense to clog up the GUI, and sometimes it's good just to commit to a decision.

Rossi had recently picked up a Yamaha Clavinova CSP-150 on tour, on account of its impressive on-board sound library, and this sat in the corner of the studio with a pair of Roland DS-90A monitors, creating a nice 'keys' station that gave Andrew Bown a degree of privacy to work in — Rossi felt this did something for Bown's comfort, compared with sitting him in the middle of the room. He was right: Bown really shone when working in his corner! 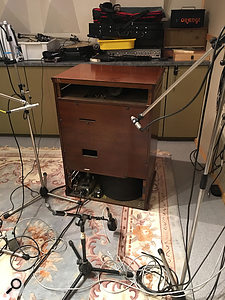 Having initially played an organ part through a triple-miked Leslie cabinet, for this record the band eventually settled on Logic Pro's Vintage B3 virtual instrument. 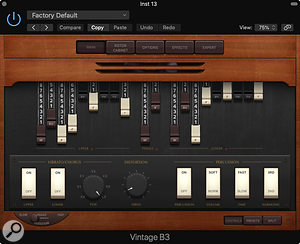 Most of the keys parts were recorded as audio, with only a few using MIDI to access some sounds from Logic's EXS24 sampler or EastWest's Composer Cloud after the event; with a player of Bown's calibre, there's no need to keep the MIDI purely to tweak the performance. There's a great deal of tonewheel organ on the record, and to begin with we fed a Roland RD‑2000 stage piano patch through a Leslie cabinet, with a three-mic setup. But while Bown has always been something of a purist when it comes to recording Hammond, he was open to broadening his approach, so we tried triggering Logic's Vintage B3 virtual instrument using the RD‑2000. With a couple of MIDI-learned control changes and a drum-speed switch operated by a volume pedal, we were away! The sonic difference was small but, importantly, there were now no squeaks, mechanical noises or voltage drops to worry about.

We also made good use of Roland's pocket-sized VP‑03 vocoder in the second verse of 'Liberty Lane', although it proved tricky to capture the sound we wanted as we found the VP‑03's input seemed prone to overloading with loud vocals. After experimentation with different mics, we found this device worked best when singing in the register of the keyboard part... and even then it needs be more of a whisper than a firm vocal to really get the effect to shine.

This article was intended to be more about recording than mixing, so I'll only pick out a few mixing highlights — but I'll emphasise that this wasn't a linear project, where we'd finish tracking everything and then start mixing. In fact, there wasn't any separation between these stages, and that was deliberate. If there was an idea for the mix it would be executed there and then. We wouldn't have to revisit ideas later, and that helped to keep everything fresh.

An interesting aspect of these mixes was that I'd set up a side-chaining template at a very early stage, aiming to address a lot of mix issues almost automatically. The bass was ducked by the kick and the floor toms to let those events punch through; the hats by the snare, to keep the snare attack nice and clear; the rhythm guitars by the lead guitar figures; and the entire track by the main vocal. These interactions were subtle, with only 1-2 dB of gain reduction at most, but it really helped to glue things together without having to engage automation at every turn. That said, we eventually abandoned the idea of using the vocal to duck the mix; when it comes to where a vocal sits, there's a clear distinction between pop and rock tracks, and the side-chaining gave the vocal too much prominence.

The bottom end of the snare was 'shaved' to remove some honk/boxiness. People often opt to push a snare in the 150-250 Hz area to fatten it, but I find this can be counterproductive in the context of the mix. Wanting to push the snare further sonically, we instead opted to use gated reverb to fashion the drum's decay. (Decay times were always song-specific, designed so they'd fall in line with the tempo of the track.)

We also took a lot of low end out of the vocals, particularly the BVs, to address what Rossi would describe as 'woofiness' or 'wooliness' — that distinctive build up of 'mud' when multiple layers of vocals are stacked, even when more conservative high-pass filters (around 100-120 Hz) are used. We pushed the filter for most vocals to around 300Hz, and even 500Hz in a couple of case. It's amazing just how much of a sound we can still perceive when its fundamental frequency is missing!

The album that the band, the record label, the management and the agent had heard in the studio prior to mastering was dynamic, earthy and organic. We needed to maintain this in the finished record, so the final master needed to be supremely sympathetic to the mix.

After having a few test masters back, a decision was made that the album would be mastered 'in-house' — in other words, by me! The main argument in favour of this approach was that everyone who'd heard it to date was very excited with how it sounded, so it didn't make sense to outsource the project and have that sonic content change. Now, I do enjoy the mastering process but I'm also of the mind that if you've been involved in the recording and mixing, it's essential to get some distance from the project before returning to work on it at this stage. So I made a point of stepping back for a while, and spent some time listening to current releases to get a better idea of contemporary trends.

Thankfully, we seem to be reaching a time where we aren't necessarily expected to produce unnecessarily loud or over-compressed masters. Having approached the mixing understanding that someone else would master the record, I'd paid very close attention to the levels throughout, making sure there was ample headroom on the master bus, and avoiding clipping at plug-in, track, group or aux stages. That was harder than it sounds, due to the sense of excitement in the room; throwing track after track at a song eats headroom quickly, and it kills creativity if you keep stopping to rebalance the mix. You can't just bring all the faders (or fader groups) down when automation is already in force, though — in those cases, creating VCA groups allowed me to claw back headroom quickly, without disturbing the mix balance.

I mastered 'in the box' using iZotope Ozone 5 (not a current version — I prefer the interface and I use some tools that aren't available in later revisions!). There's no point applying processes for the sake of it — mastering is all about listening and making judgments. But for this project, I typically used M‑S multiband compression to tame the bottom end and expand the high-mids and highs without making things too wide. I also applied subtle low-end boost for an added sense of weight, and an air boost to brighten the high-end a touch. A tiny amount of filtered reverb (high-passed at 500Hz and low-passed at 2kHz) helped gel things together — the filtering prevented this tactic making the end result sound too boomy or bright.

The other issue one has to contemplate when mastering, of course, is loudness. I really like the interface of Waves' WLM loudness meter, and used that here — I don't aim at a particular LUFS figure, but it's handy to keep an eye the meter while making decisions. Rossi and I agreed that we didn't want to push the levels too hard, and we found that if we tended to stay on the safer side of -10 LUFS it generally worked well: it didn't compromise the dynamics or sonics of the music, and the result was a polished, punchy, dynamic master that satisfied everyone involved and that any discerning listener could enjoy.

Here's what Francis Rossi had to say on the mastering: "We realised the way we mastered was different compared to many modern [records]... I don't see where the musicality is in making it louder. Surely, musicality comes with maintaining the dynamics. There might've been listeners that found the album is not as loud as some current releases. However, we do have amplifiers and a volume control — turn the fucking thing up!

"At one point we'd got so far with the mastering, and I remember thinking it just sounds like every other Quo thing we've done. We went back a notch or two from there, and it sounded like it does now. You have to let the music breathe a bit. It breathes when it's live. It breathes when it's being put down... We ended up with a record that does just that." 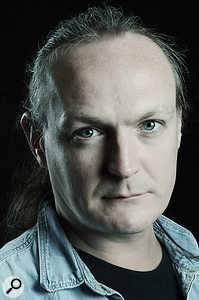